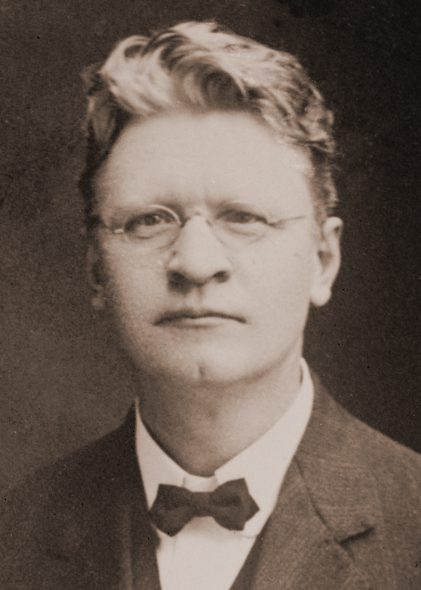 Emil Seidel was the first Socialist mayor of a major U.S. city. Photo is in the Public Domain.

Wisconsin native Dan Kaufman, who now lives in New York and has written stories for the New York Times and New Yorker, has written a new book, The Fall of Wisconsin, tracing the roots of Progressivism in Wisconsin and contrasting that to the recent, conservative transformation of the state. This chapter focuses on Milwaukee’s Socialists, who worked at times in tandem with Madison-based reformers like University of Wisconsin economist John R. Commons.

Commons advocated for the workers’ compensation law, a minimum wage, unemployment insurance, and child-labor laws. He was also a proponent of a “living wage,” a term that was codified in a Wisconsin state statute Commons drafted, which passed in 1913. The minimum wage, the law read, “shall be not less than a living wage,” sufficient to permit an employee to maintain herself or himself “in reasonable comfort, reasonable physical well-being, decency, and moral well-being.” (Scott Walker’s 2015 budget struck the “living wage” language from Wisconsin’s books.)

Like the other Progressive milestones of the 1911 legislature, the passage of workers’ compensation was aided by the twelve assemblymen and two state senators who were members of the Milwaukee Socialist Party. In 1910, after a corruption scandal in Milwaukee had tarred both Republicans and Democrats, the Socialists swept into power, winning the state legislative offices, the mayoralty (which they would hold, off and on, until 1960), and a congressional seat. The party’s electoral victories in 1910 pushed the progressive Republicans to the left, prompting them to make bolder reforms to compete for voters. “The only way to beat the Socialists is ‘to beat them to it,’” Charles McCarthy wrote.

Milwaukee’s Socialist Party grew out of the enormous number of German immigrants who began pouring into the city in the late 1840s. Many of those migrants were fleeing the failed 1848 revolution in Germany and had been members of the Turnverein, or Turners, a physical-fitness movement focused on gymnastics that also encouraged intellectual development and liberal, sometimes revolutionary, politics. The Turners established strongholds across the Midwest and were especially active in Milwaukee. Like many of Wisconsin’s Scandinavian farmers, they held strong antislavery views, and the movement passionately supported Abraham Lincoln’s 1860 presidential campaign. Prominent Milwaukee Turners included Carl Schurz, a ’48er who went on to become a Union Army general, a United States senator, and the secretary of the interior, and Mathilde Franziska Anneke, a journalist, socialist, and friend of Karl Marx who settled in the city in 1849 and three years later started Deutsche Frauen- Zeitung, the first feminist journal founded by a woman in America.

The Turners built several centers in Milwaukee that offered gymnastics equipment as well as beer halls, meeting rooms, and auditoriums for social and cultural events. The facilities also became incubators of radical politics. In 1897, the Social-Democratic Party, the precursor to Milwaukee’s Socialist Party, was cofounded by a Romanian Jewish immigrant named Victor Berger, a brilliant tactician and organizer who developed what became called the “bundle brigade.” An army of volunteers that swelled to a thousand members, it could print flyers and pamphlets in twelve languages and deliver literature in the appropriate language to every home in Milwaukee within forty-eight hours.

In 1895, Berger, who would later become a United States congressman, visited the labor organizer Eugene Debs in an Illinois prison, where Debs was serving a sentence for leading a railroad strike. Berger brought Debs a copy of Marx’s Capital, introducing Debs to socialism. In 1901, Berger, Debs, and another comrade founded the Socialist Party of America; Debs would go on to become the party’s presidential candidate in four elections, winning 6 percent of the vote in 1912. But even as Berger shaped the broader movement, his strand of socialism was democratic and reformist, focused not on revolution but on achieving concrete gains for Milwaukee’s working class through the electoral process. “In America for the first time in history, we find an oppressed class with the same fundamental rights as the ruling class—the right of universal suffrage,” Berger wrote in the Social Democratic Herald, a Socialist weekly. “It is then nonsense to talk of sudden bloody revolutions here, until the power of the ballot has been at least tried.”

A woodcarver named Emil Seidel captured Milwaukee’s mayor’s office in 1910, becoming the first Socialist mayor of a major American city, while the party also won majorities on the city council and the county board. The party’s victories that year were owed largely to its reputation for being incorruptible. (“They never were approached by the lobbyists, because the lobbyists knew it was not possible to influence these men,” William Evjue, a progressive Republican legislator, once said of the Milwaukee Socialists.) Two years after Seidel’s victory, Democrats and Republicans conspired to defeat him, but in 1916 another Socialist, Daniel Hoan, won the mayor’s office and held it for the next twenty-four years. Hoan fashioned a transparent city government and won a higher minimum wage for city workers, while investing in “public enterprise”— libraries, schools, and one of the country’s most extensive park systems. While the party’s strength would never match its 1910 peak, its influence on Milwaukee, and the state as a whole, persisted. In 1924, despite a sometimes fractious alliance with La Follette’s progressives, the Milwaukee Socialist Party endorsed La Follette’s presidential bid, helping make Wisconsin the only state his Progressive Party would win.

While Victor Berger is credited as the architect of Milwaukee socialism, it was Emil Seidel who captured the spirit of its idealistic pragmatism. “Some eastern smarties called ours a Sewer Socialism,” Seidel wrote in his memoirs. He went on:

Yes, we wanted sewers in the workers’ homes; but we wanted much, oh, so very much more than sewers. We wanted our workers to have pure air; we wanted them to have sunshine; we wanted planned homes; we wanted living wages; we wanted recreation for young and old; we wanted vocational education; we wanted a chance for every human being to be strong and live a life of happiness. And, we wanted everything that was necessary to give them that: playgrounds, parks, lakes, beaches, clean creeks and rivers, swimming and wading pools, social centers, reading rooms, clean fun, music, dance, song and joy for all. That was our Milwaukee Social Democratic movement.

Excerpt from The Fall of Wisconsin: The Conservative Conquest of a Progressive Bastion and the Future of American Politics, by Dan Kaufman, published by W.W. Norton & Company