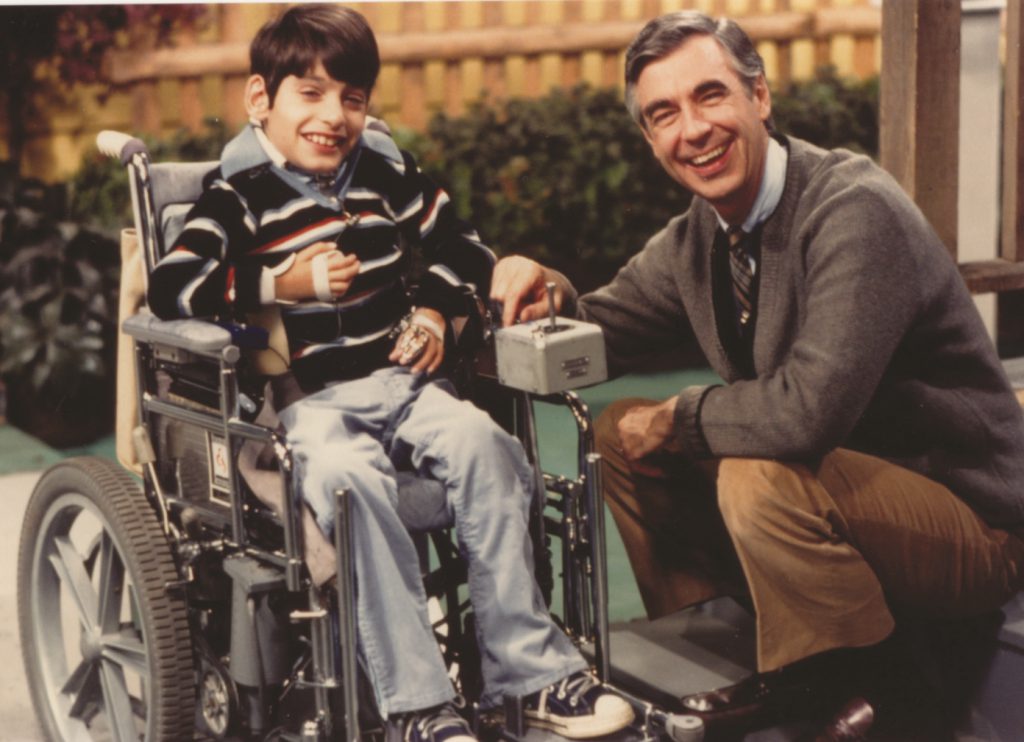 Jeff Erlanger and Mister Rogers on Set – First Aired in 1981.

Jeff Erlanger was a devoted Milwaukee Brewers fan growing up. He watched as many games on TV as he could. But because he was a quadriplegic, he couldn’t dress himself. So Jeff’s father Howard Erlanger played a game with his son as he dressed him. Who is the centerfielder for the Brewers? Gorman Thomas, yes, that’s right. Now we’ll put on one sock. 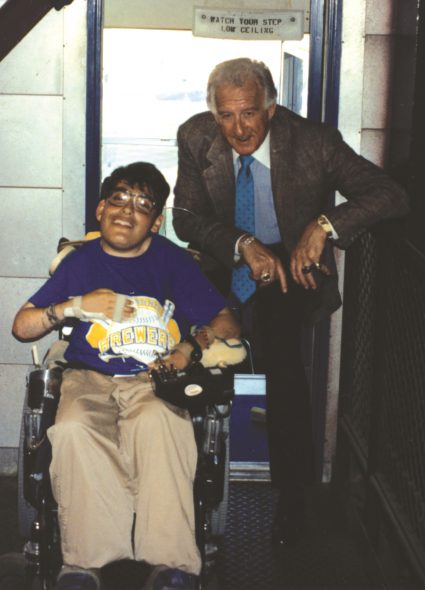 Jeff grew up in Madison with his parents, Howard and Pam, and his older sister Lisa. Like many kids in the 1970s, Jeff loved watching the television show Mister Rogers’ Neighborhood. He would watch the show two times a day, once on the Milwaukee PBS station and once on the Madison public television station.

Jeff was born in 1970 and when he was just six-months-old doctors discovered a large tumor in his spinal cord. Jeff had dozens of surgeries as a kid and was left with limited control over his body; he had limited use of only one arm and no use of his hands. When Jeff was not even five-years-old he had to have risky spinal fusion surgery that would be especially difficult. Jeff’s parents told their son, “It will be really hard and it won’t feel good when you come out of it. We’d like to do something really special before the operation.”

They expected their son to ask to go to Disney World. Jeff told them he wanted to meet Mister Rogers. 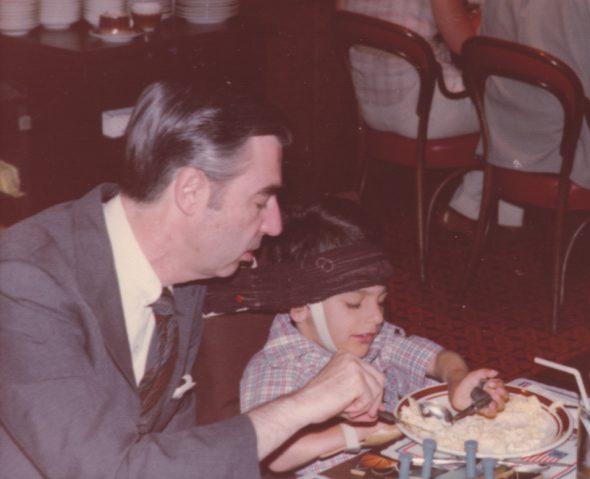 Jeff’s parents sent a letter to Fred Rogers at the station WQED in Pittsburgh where he filmed his show to explain the situation. They got back a personal letter, written by Fred Rogers himself, typewriter edits and all. He told the Erlanger family that as luck would have it he was heading to Milwaukee to do a promotional event with the Milwaukee PBS station. If they could make it from Madison to Milwaukee, Mister Rogers would be able to meet Jeff.

Mister Rogers even suggested that they stay at the same hotel where he was staying so that if he had free time they could meet up more easily or have a meal. So the Erlangers drove to Milwaukee and stayed at The Pfister, which was, as Howard Erlanger recalls, “a stretch for us at the time, but cheaper than flying to Pittsburgh.”

Mister Rogers had time to meet the whole Erlanger family for breakfast. Jeff could feed himself but with some difficulty, and when Mister Rogers saw Jeff struggling with his scrambled eggs, he said, “Oh why don’t you let me do that.” Fred Rogers asked Jeff’s parents to switch seats so he could sit next to Jeff to help him, and the two had an immediate connection.

The meeting in Milwaukee had an effect on Mister Rogers, and Jeff stayed in his mind. More than a year later, in a handwritten letter dated August 21, 1976, Mister Rogers wrote to the Erlanger family: “I think of you all often and remember the special time we had together. I’m really glad that we could arrange a visit nearer to your neighborhood. It was meant that we meet when we did.” 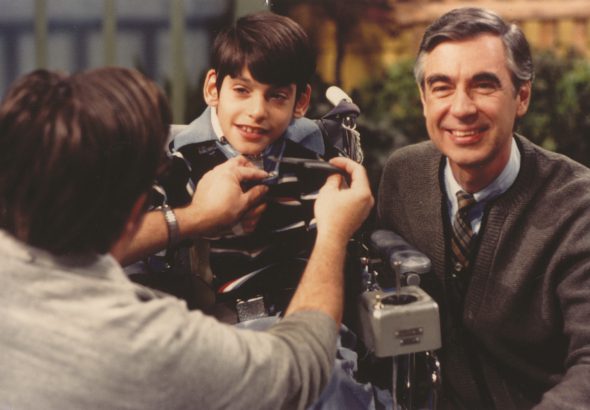 Jeff Erlanger and Mister Rogers on Set – First Aired in 1981.

Fred Rogers’ staff wanted to know: Can’t we just get a cute local kid from here in Pittsburgh? Mister Rogers replied, “Nope. We’re not doing it until we find Jeff!” Eventually a staff member stumbled upon an old letter from the Erlangers with the Madison address and they got in touch. So the Erlangers went to Pittsburgh, and in 1981, when Jeff was ten-years-old, his appearance on Mister Rogers’ Neighborhood was broadcast across the country.

Jeff’s father Howard says, “It was unscripted, unrehearsed. And they aired the whole scene totally uncut. It’s just a rich encounter between two people who respected each other and had a chat.”

After Jeff showed Mister Rogers how his chair moved and explained how he became handicapped, Mister Rogers invited Jeff to sing “It’s You I Like” together. Mister Rogers had knelt down so that his eyes were level with Jeff’s, and with their faces just a foot apart the two of them sang.

Almost two decades later, Fred Rogers was inducted into the Television Hall of Fame in 1999. Jeff flew to Los Angeles to invite his old friend Fred on stage to receive this great honor. Everyone kept Jeff’s appearance a complete secret so that when Fred Rogers saw Jeff come on stage it was a real surprise.

Mister Rogers always appeared in front of children with a serene happiness, a calm and pleasant smile. But when he saw Jeff come on stage, the joy on Mister Rogers’ face was that of a little kid meeting his hero or seeing a long lost friend. Mister Rogers leapt out of his seat like Roberto Benigni winning an Oscar.

Fred Rogers died of stomach cancer in 2003 at the age of 74. At his memorial service at Heinz Hall in Pittsburgh, there were three main speakers: Yo-Yo Ma, Itzhak Perlman, and Jeff Erlanger. Jeff died in 2007 at the age of 36 from respiratory complications.

Jeff lived a full life. He went to college and was an advocate for the disabled. He ran for the Madison City Council. He had a smile that somehow seemed wider than his entire face.

Howard Erlanger calls his son Jeff “one of my favorite topics” and says, “It’s a life to celebrate, not a life to mourn. He had a really full life, and meeting Mister Rogers was this incredible moment in his life that affected him.” It affected millions of other people too.

The documentary Won’t You Be My Neighbor? is currently showing at several Milwaukee theaters. It includes scenes from times when Mister Rogers and Jeff Erlanger met as well as interviews with Jeff’s proud parents, Howard and Pam Erlanger.