Why State’s Lakes Are in Decline 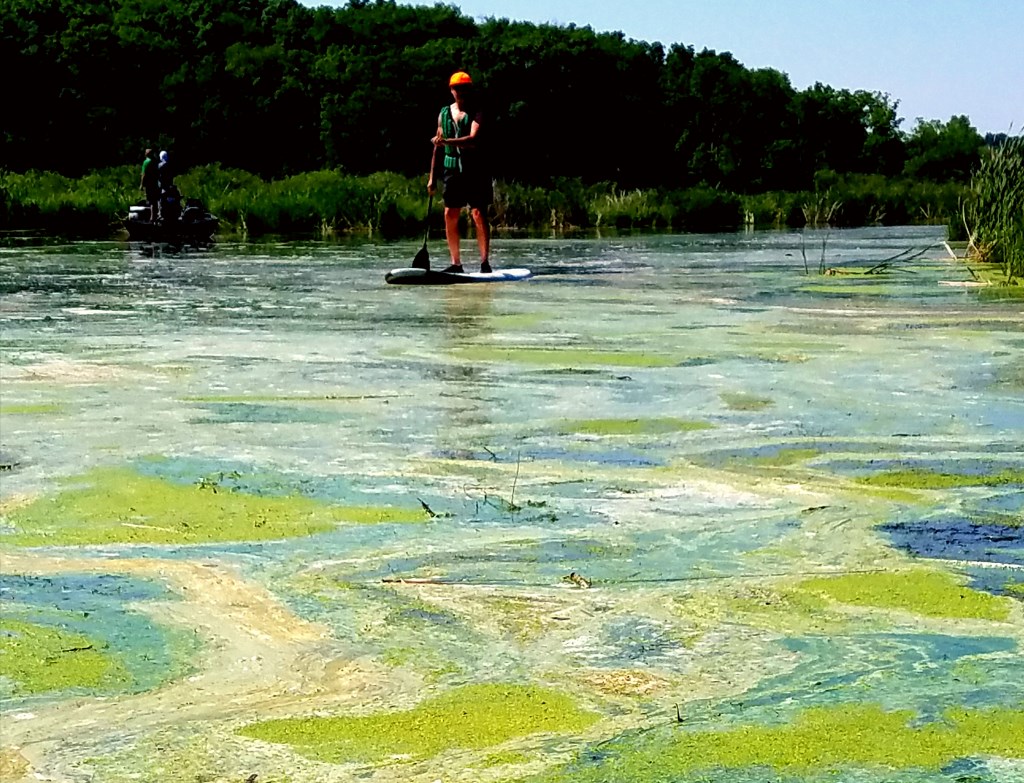 A couple days ago I hopped on my paddle board to spend a little time exploring Lake Waubesa. In many ways it was a perfect summer day in the Badger state – close to 80 degrees, sunny with blue skies, and a breeze just brisk enough to be refreshing and keep most of the bugs away. Almost perfect but not quite.

It’s always a joy to be out on the water in Wisconsin where we are blessed with so many beautiful lakes and streams. What should have been one of those idyllic summer mornings was marred by the water pollution that has become all too common around the state these days. Much of the lake was covered with a thick scum of blue-green algae and the odor emanating from that slimy mess was anything but pleasant. But it’s not just a stinky eyesore – the algae bloom threatens both aquatic life and human health. Decaying algae lowers oxygen levels and leads to fish kills. Because it emits toxins, blue green algae can cause illnesses, including respiratory failure, organ damage, gastroenteritis and rashes.

Lakes are essential to our quality of life, to our $12 billion a year tourism industry and to property values. Yet, on all too many of our lakes, enjoyment is severely limited by excessive growth of algae and weeds fueled by phosphorus pollution.

While water pollution is a long standing issue in Wisconsin waterways, we are learning more about the extent of the problem. More than 800 waterways have been added to the list of lakes and streams that exceed phosphorus and other pollutant limits since Scott Walker became Governor. Given the importance of clean water to our state, you would think that state government would be working diligently to address this situation. Just the opposite has been happening. Instead of working to improve lake water quality, Walker, along his political appointees and legislative allies, have enacted new rules and laws that threaten to degrade water quality even more.

A recent audit found that the Walker administration failed to follow enforcement policies against polluters more than 94 percent of the time. Under Walker, referrals for legal action against polluters have been cut in half. Enforcement is especially poor for megafarms that produce large volumes of manure.

Walker has weakened regulations that control shoreline development and dredging, both of which lead to increased lake contamination. Walker is allowing the destruction of more wetlands, which are essential to water quality because they absorb pollutants before they reach the lakes. The Stewardship Fund, which protects land in watersheds crucial to water quality, has been substantially decreased. Walker has underfunded county soil and water conservation departments which help farmers improve agricultural practices to reduce pollution runoff. He decimated the DNR science bureau which has provided essential research on pollution control.

Faced with the failure of state government under Walker to adequately address the deteriorating condition of lakes, many local governments and lake associations have stepped up to improve water quality. A prime example is Dane County where County Executive Joe Parisi has launched an ambitious effort to clean up the lakes, including Lake Waubesa. However, Walker has been kneecapping these local efforts. Walker prohibited counties from enacting necessary controls on inappropriate shoreland development even as state standards have been weakened, banned local governments from regulating polluting megafarms, and severely limited the ability of local governments to control storm water runoff.

Summer in Wisconsin should mean getting out on a lake that’s not befouled by pollution. We need a Governor who will help, not hinder, efforts to keep our waters clean and our summers enjoyable.

Spencer Black represented the 77th Assembly District for 26 years and was chair of the Natural Resources Committee. He currently serves as the vice president of the national Sierra Club and is an adjunct professor of urban and regional planning at UW-Madison

5 thoughts on “Op Ed: Why State’s Lakes Are in Decline”