By Ximena Conde, Wisconsin Public Radio - Jul 2nd, 2018 11:15 am
Get a daily rundown of the top stories on Urban Milwaukee 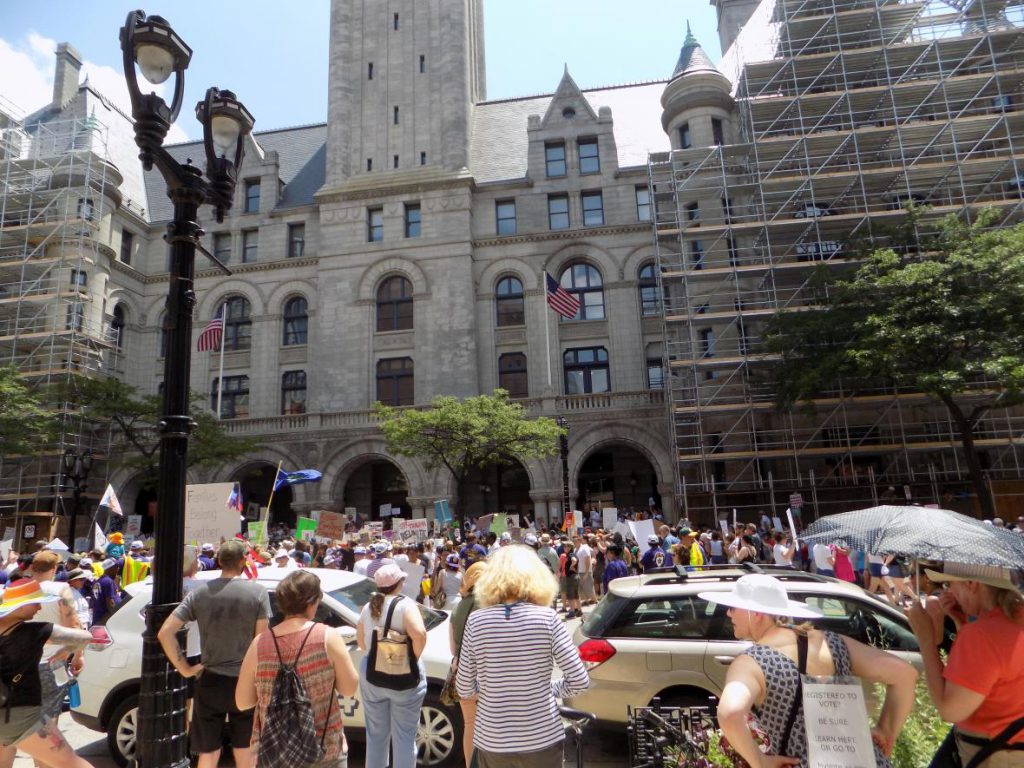 During the Keep Families Together rally in Milwaukee on Saturday, attendees blocked off traffic to one of the city’s main streets. Photo by Ximena Conde/WPR.

At least 20 rallies were held across Wisconsin on Saturday to speak out against the Trump administration’s “zero tolerance” immigration enforcement policies. Rallies were also planned in Washington, D.C., and the rest of the country.

The events’ organizers, the Families Belong Together, remain critical of family separations that were taking place along the country’s southern border until an executive order ended the practice this month.

Although the practice of separating children from their families at the border has stopped, organizers say they’re unsatisfied with the slow pace of reunification of families already separated from an estimated 2,000 children. Just this week, a federal judge in California gave the administration 30 days to reunite families with tighter deadlines for younger children. Officials with the U.S. Department of Health and Human Services has argued the process of reunification takes at least two months.

Still, while no new families entering the country will be separated, organizers say the executive order signed by President Donald Trump allows families to be jailed together. Organizers claim that’s a minimal improvement.

Other criticisms include a lack of progress in fixing the Deferred Action for Childhood Arrivals program, which gave temporary legal status to children brought into the U.S. at a young age. 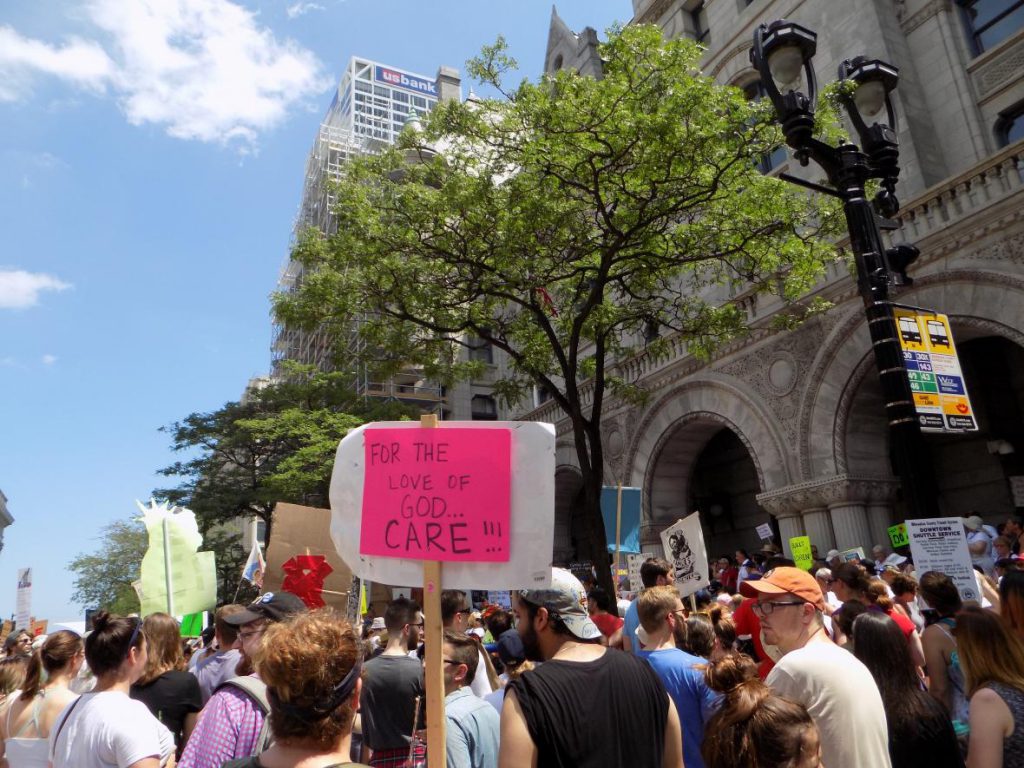 In Wisconsin, rallies started early in the day in cities like Eau Claire and Green Bay. In Green Bay, local police and organizers estimated several hundred people showed up downtown and marched around the block close to the farmers’ market.

Attendees sang, shared personal migration stories and filled out postcards to send to their elected officials, said Rissel Peguero, one of the Green Bay organizers and a DACA recipient.

“We also wanted to make sure that they knew that by coming here, they weren’t done with the work that they had to do,” said Peguero. “But they had to get registered to vote, they can get Facebook friends also to come with them to the polling places.”

Later in the day, several hundred attendees rallied in downtown Milwaukee, eventually drawing enough people to cut off traffic on one of the city’s major streets.

The event was hosted by several organizations, including Progressive Moms of Wisconsin, Brewery Workers Local 9 UAW and Citizen Action of Wisconsin. A host of speakers called for the reunification of families and abolishing ICE.

Santos Alejandro Poblano Gomez attended the rally with his wife and son. Born in Mexico but now a Wauwatosa resident, he said the issue of family separations felt personal to him. 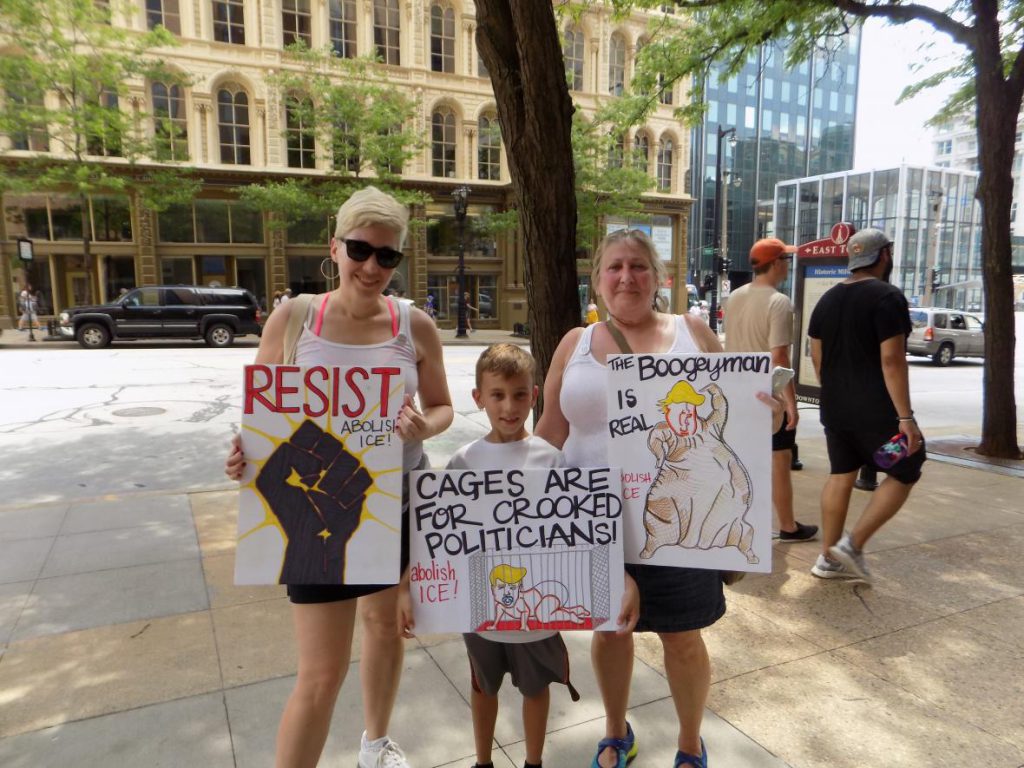 “(Being) a husband of an American and (having) a Mexican-American child, sometimes you feel it in a different way,” he said. “I am an immigrant here in the process of getting my citizenship. So I can feel that tension.”

He said he can’t imagine what it would be like if he and his son’s immigration status were different.

Rabbi Noah Chertkoff was with his family, including three children, and members of his congregation. He said he felt the need to support those who are yet to be reunited with their children.

“It resonates as a parent, but it certainly also resonates as a Jew, considering our history over the last century and America being a place of refuge for us as our ancestors were escaping terrible situations in Europe and the Holocaust,” he said.

In Madison, organizers estimated at least 600 people were in attendance.

More than a dozen community groups and leaders were slated to speak according to organizers. Attendees were asked to fill out pledge cards, promising to head to the polls this year.