By Andrea Waxman, Milwaukee Neighborhood News Service - Jun 14th, 2018 10:28 am
Get a daily rundown of the top stories on Urban Milwaukee 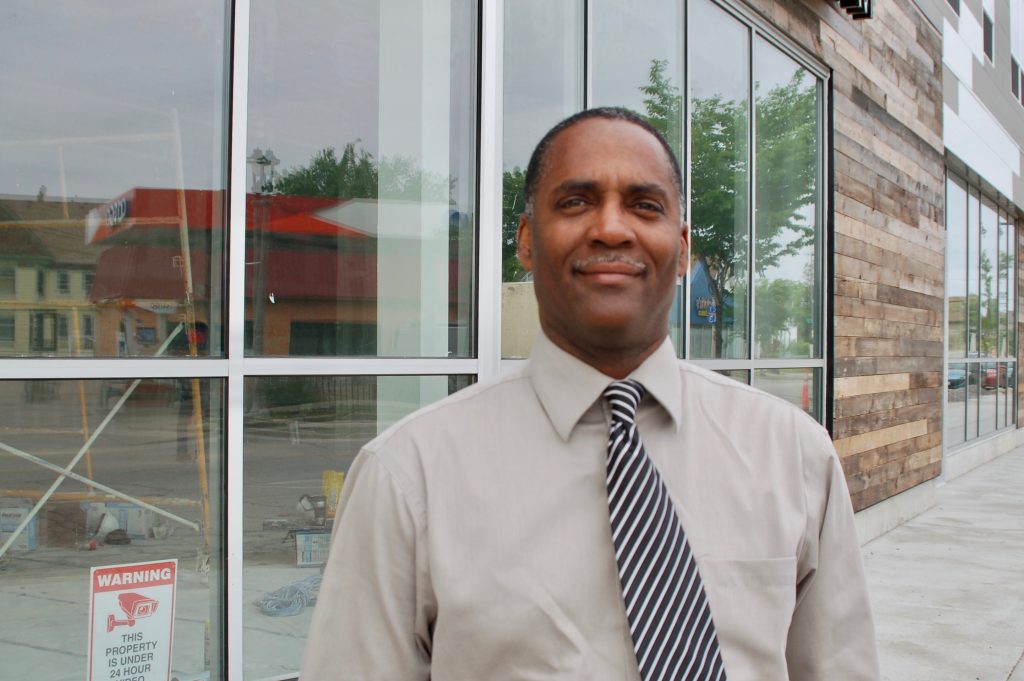 Reggie Jackson, head griot and former board chair of America’s Black Holocaust Museum, stands outside the Griot, 401 W. North Ave, where the museum will re-open this fall after being closed for a decade. Photo by Andrea Waxman.

Dr. James Cameron, the only known survivor of a lynching, spent his adult life using the story of his horrific experience at age 16 as a vehicle for educating people about America’s brutal racial history and ongoing racial injustice. Cameron, now deceased, also sought to inspire them to pursue a racially equitable society.

On June 18 and 19, the community will commemorate the 30th anniversary of Cameron’s founding of America’s Black Holocaust Museum and the completion of The Griot, the building that will house the newest incarnation of the museum and mixed-income rental apartments. The museum will open in fall.

The Monday, June 18 event, which is free and open to the public, will kick off at 10 a.m. with a reception, Tia Richardson mural dedication and building tours. A program featuring actor Danny Glover will follow. It will be the first in a series of opportunities to become a museum member.

Award-winning poets and activists Aja Monet and Sonia Sanchez will speak on Tuesday, June 19, from 6 to 9 p.m. This event includes food, beverages and music by the Eddie Butts Band. A $25 ticket, which can be purchased on Eventbrite, is required.

Both celebrations will take place in the new museum space at 401 W. North Ave.

Cameron established the museum in the basement of his North Teutonia Avenue home and moved it to a storefront on Atkinson Avenue and then to the Clara Mohammed School building on Wright Street and Dr. Martin Luther King Drive, according to his son, Virgil Cameron.

On June 19, 1988, James Cameron opened the museum in a much larger freestanding building, a former boxing gym, said the museum’s head griot Reggie Jackson. Cameron bought the building at 2233 N. 4th St., around the corner from the new museum, from the city for $1, his son said. June 19, or Juneteenth, commemorates the end of slavery in the United States.

“Griots are oral historians … the keepers of the history of their communities in West Africa” and prestigious advisors to their leaders, said Jackson, a museum volunteer since 2002. The position of griot is usually passed from generation to generation, with parents teaching children from a young age. Cameron wanted the museum’s docents to be called griots in honor of their African forbearers, Jackson said. 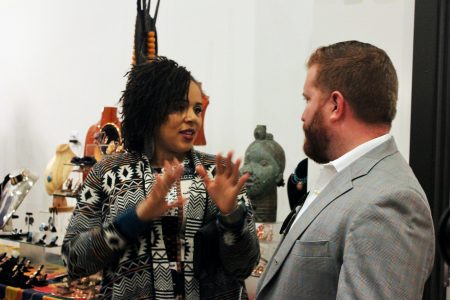 Melissa Goins, founder and president of Maures Development Group, talks with an attendee at a celebration of the opening of the Historic Garfield Apartments, in October. Photo by Alhaji Camera.

Cameron died in June 2006 and the museum closed two years later due to a lack of funds.

“It would have broken my father’s heart to see it closed … because he used his whole life to open the museum and (through it) address the problems of racism and violence in our society,” Virgil Cameron said.

Jackson, one of a group of people who wanted to continue Dr. Cameron’s work, credits Fran Kaplan, an educator and his consulting firm partner, with initiating a virtual America’s Black Holocaust Museum on the internet in February 2012. That strategy reduced costs, preserved the information disseminated by the museum and ultimately attracted a large national and international following.

“It was a great avenue to make sure that the museum stayed relevant in people’s minds,” said Tyanna McLaurin, board chair of the Dr. James Cameron Legacy Foundation, the museum’s nonprofit umbrella organization.

Millions of people visit the virtual museum each year and they have been following the development of the new physical museum, McLaurin said.

The museum has also carried on its education work through its “Griots To Go” speakers’ bureau and public programming with Jackson as the primary speaker. He speaks throughout the state and, sometimes, the country.

Virgil Cameron, Jackson, Kaplan, Reuben Harpole and Brad Pruitt, the museum’s executive director, have worked with Ald. Milele Coggs and the city for almost a decade to reopen the museum in a physical space in the Bronzeville Cultural and Entertainment District, a city redevelopment initiative in the works since 2005.

The Griot’s opening is “a huge win for the community, for this city, this state and this nation.” And it’s a huge win for the museum to be coming back in its physical form in Bronzeville, “where it all began,” said Coggs.

Virgil Cameron said that it is time to address the country’s history of lynching. “We must talk about this because it happened and if we don’t address history it may have a chance to repeat itself.” The senior Cameron was adamant about reaching out to people and getting a dialog started, his son said.

“To see (the museum) raised back is like a phoenix rising,” Cameron said, “I know dad is smiling down on us now.”

The Legacy Foundation has raised $1 million or about one-third of the $3 million needed to set up and operate the museum, McLaurin said. The group has “a very ambitious goal of $7 million,” which would establish a $4 million endowment to ensure the museum’s future. The developers and architecture firm have made significant in-kind contributions, McLaurin noted.

In 2015, the city selected Maures Development Group, LLC, through a competitive process, to lead the redevelopment of the historic Garfield Avenue School building, 2215 N. 4th St., on the same block as the former museum. The school was built in 1887 and closed in 2006. Maures partnered with J. Jeffers & Co. and Engberg Anderson Architects on the $17 million project to create the Historic Garfield Apartments and The Griot, where the museum will occupy 6,000 square feet on the ground floor.

The 30-unit Historic Garfield Apartments opened to renters earning a maximum of 60 percent of the area’s median income on Nov. 1. The building is fully leased, said Melissa Goins, Maures’ founder and president.

The Griot will offer low-income and market-rate rentals, Goins said, “It’s all just people — people who make different amounts of money. I think it’s important to have a variety of income categories for a successful community, whether it’s within a property or within a neighborhood.”

The 41-unit Griot Apartments were first offered for rent on May 1 and 20 households moved in during the first month. Goins expects the building to be fully leased within two months.

Coggs credits many people, including Mayor Tom Barrett, for the successful completion of the project, the Bronzeville District’s largest and most complex. The city worked with the foundation board and the Cameron family for years to help them find a way to re-establish the museum in a physical form, according to Coggs.

Goins earned Cogg’s praise for her commitment to the project and the artistry she incorporated in the spirit of the original Bronzeville neighborhood. When Pruitt and his team joined the Legacy Foundation leaders, they brought new energy and a different way of thinking to people who had worked so hard for so long and faced so many difficulties, Coggs said.

She added that the project’s success is “a demonstration of how we can all work together and make some great things that we can all be proud of happen.”

Goins noted that June 18 marks Maures’ 12th anniversary. That milestone, together with the museum’s 30th anniversary and the completion of the campus buildings, call for celebration, she said. These events are intended to do that and to raise awareness — “to get on the bullhorn and say, ‘Wake up everybody!’”