Wisconsin's Constitution doesn't allow sports betting, but that could change. 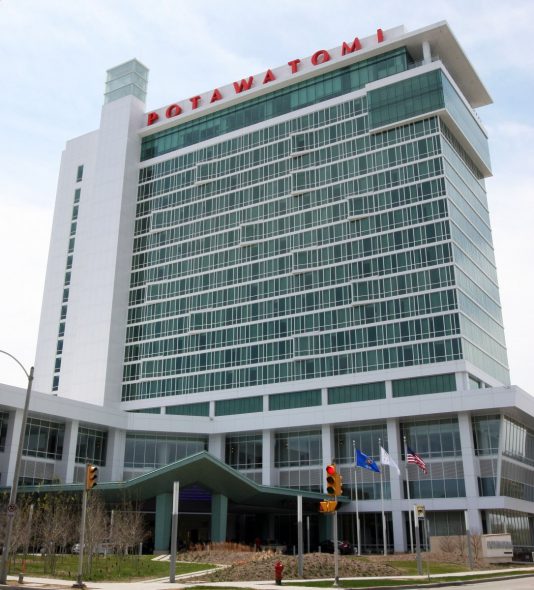 Potawatomi Casino Hotel. Photo courtesy of the City of Milwaukee.

Still, tribal leaders and their lawyers are studying this important question:

Could gaming compacts the tribes have in place with state government that give them – and only them – the right to operate casinos be renegotiated to also offer sports betting?

“In any negotiation, there are two sides: You want something, you have to give up something,” noted one lobbyist who has worked on state government deals for decades.

That raises this scenario:

Could the tribes ask to renegotiate the compacts giving them the exclusive right to operate sports bets in exchange for – let’s make up a number – $50 million more a year to rebuild major state highways that gamblers drive on to get to those casinos?

OK, that $50 million number may be too high.

The state Department of Administration reports that all tribes shared casino profits of $53 million with state government in fiscal 2017. That was a 56% drop from the record $122 million payment the tribes made in fiscal 2009.

But is a potential cash-for-sports-betting scenario so far-fetched?

Consider that Gov. Scott Walker and Republican legislators have controlled the Capitol for eight years, but can’t agree on how to pay for highways.

And consider that tough negotiating by state officials could lock in a dedicated revenue stream for highways for years, while casinos take the risks of going up against Las Vegas, New Jersey and other sports betting meccas.

Finally, consider that few states have three professional teams – Packers, Brewers and Bucks – on which to place sports bets. And did one recent pre-season analyst rate UW-Madison’s football team No. 5 in the nation? Hmm.

Officials of three tribes running Wisconsin casinos were asked if they plan to ask the next governor and Legislature to reopen compacts to allow them to start taking sports bets. None ruled it out.

“The Ho-Chunk Nation is considering whether it is worth the investment to have sports betting before it would ask the governor to reopen the gaming compacts to allow it,” said Collin Price, a tribal public relations officer.

“The Nation’s initial analysis shows that the revenues generated from sports betting being reported in the national media may not translate into the Wisconsin tribal casino setting.

“At this stage, the Ho-Chunk Nation is continuing to study the matter, and consider how sports betting could affect the enterprises that serve the Nation’s sovereign government operations, the tribal communities where we provide services and the broader communities that are impacted.”

After checking with Potawatomi tribal leaders, who are expanding the tribe’s Milwaukee hotel and casino, lobbyist George Emert said:

“We are reviewing the ruling passed down by the Supreme Court effectively overturning the federal ban on sports gambling and turning these decisions over to the states.

“We are also looking at how this decision will impact the state of Wisconsin. All decisions we make now and in the future are with the business’s competitive market standing and long-term sustainability in mind.”

A Oneida Nation lobbyist said tribal leaders are also “looking at the Supreme Court ruling and the potential impacts,” and had no other comment.

Adding to the drama is guessing which, if any, Wisconsin tribe would go first in seeking a franchise for sports betting and what it would offer to pay for that franchise.

Each tribe is a sovereign nation, and makes gaming decisions independently. The Potawatomi, remember, led the fight against a Menominee Nation casino in Kenosha, which Walker killed in January 2015.

In the debate over sports betting and Wisconsin, there are two other possibilities to consider.

The next governor and Legislature could start the process of amending the state Constitution to legalize sports betting as a source of additional revue. After all, the Constitution was changed in the 1980s to legalize the state lottery, pari-mutuel betting and raffles run by non-profits.

Expect the tribes to fight that constitutional change, however.

Or, Wisconsin could take no steps to legalize sports betting. That means Las Vegas oddsmakers would continue to take your bet on which team – the Brewers or Cubs – score first tonight.