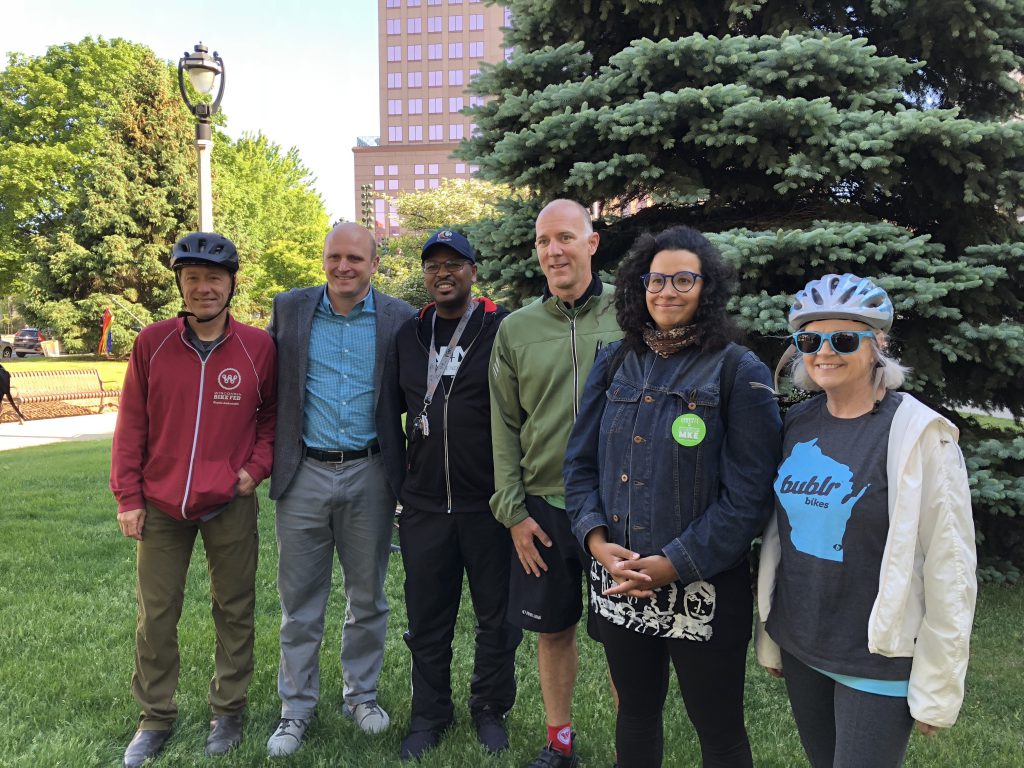 Bike to Work Week is always a time for optimism for Milwaukee’s cycling community.

Monday morning’s annual ride to Red Arrow Park didn’t fail to deliver. Cyclists biked in from all corners of the city for a press conference at the park. City Engineer Jeff Polenske emceed the event, and provided the big announcement for the day.

“There’s been a lot of progress in this city in recent years, and there’s even more to come,” said the cycling advocate. He noted that a big change is coming to city policy, the introduction of a Complete Streets policy. “We’re very close to having a final draft,” Polenske told the audience.

The policy, which will require Common Council adoption, would incorporate cycling, pedestrian and transit-centric design requirements into every street rebuild project with a focus on safety for everyone, not just automobiles. “We have to provide better facilities,” said Polenske, noting that the number of people biking in the city continues to climb.

Cycling advocates picked up at least one new rider Monday morning. Common Council President Ashanti Hamilton participated in the event for the first time. Hamilton led a ride from the intersection of N. Green Bay Ave. and W. Capitol Dr. in his district to Red Arrow Park across the street from Milwaukee City Hall.

“This was a pretty cool ride going in this morning,” said the first-time commuter. “I didn’t realize how important the bike lanes were until I was riding in the road with traffic,” added Hamilton.

Hamilton discussed the recent rebuild of W. Hampton Ave. in his district, which caused some controversy because of the introduction of painted bike lanes. “Now that it’s there and you see all the people using it, the complaints are gone,” boasted Hamilton.

Kovac said even non-cyclists should be happy to see more people riding. “It’s nice to have bicyclists in your neighborhood because the kind of behavior some drivers engage in is dangerous for everyone,” said the alderman. He said better cycling infrastructure would create a safer environment for everyone, including motorists and reduce the need for police to write tickets.

A marquee test of Kovac’s claim is pending in his district. Protected bike lanes will be installed soon on the North Ave. and Locust St. bridges over the Milwaukee River. The roads, which currently widen to four lanes as they cross the river and then narrow on each side, will be normalized to one lane with separated bike lanes installed that are divided with a vertical plastic barrier. Kovac predicts the change will be an obvious win for cyclists and a safety improvement for pedestrians and drivers.

The new lanes are part of the city’s Path to Platinum project that Mayor Tom Barrett announced at 2016’s Bike to Work Week press conference. Wisconsin Bike Federation staffer Caressa Givens told the audience that a coalition continues to meet regularly to advance the city’s case to be a platinum-certified bicycling city. Additional greenways are being developed in Riverwest as part of the effort.