Audra McDonald Will Uplift Your Soul

Conductor Andy Einhorn admits he is spoiled by the amazing talents he works with, including McDonald.

“It never does get old,” Andy Einhorn said. “I get to work alongside amazing performers like Audra McDonald, Bette Midler, Renee Fleming with such iconic shows like “Hello Dolly” and “Carousel.” Each of these performers is a powerhouse in their own way, different for their own audiences.”

On Wednesday at 7:30 p.m. at the Marcus Center for the Performing Arts, Einhorn will conduct McDonald during her show with the Milwaukee Symphony Orchestra for an evening of American song—from pop tunes and standards to Hollywood and Broadway hits.

Einhorn is a music director, conductor, pianist, orchestrator, arranger and vocal coach, he boasts Broadway credits for “Brief Encounter”, “The Light in the Piazza,” the recent revival of “Evita” and “Sondheim on Sondheim,” which won a Grammy nod for best original Broadway cast recording. Since 2011 Einhorn has served as music director and pianist for six-time Tony Award Winner, Audra McDonald, performing with her at such prestigious orchestras and venues including The Philadelphia Orchestra, San Francisco Symphony, National Symphony Orchestra, Los Angeles Opera. 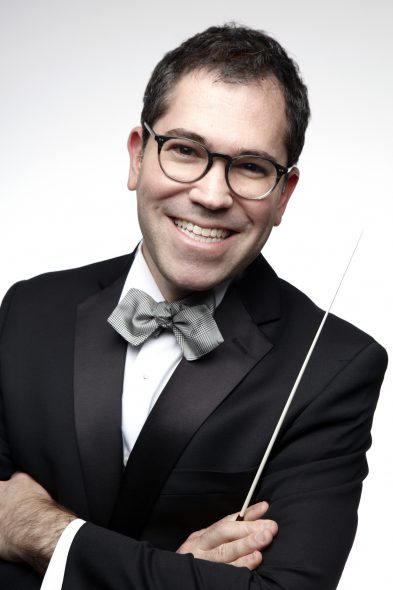 The Los Angeles Times said recently, “Perfection is not attainable in this earthly realm, but Audra McDonald came as close as humanly possible in her Los Angeles Opera concert.” Perhaps Enhorn isn’t just spoiled, but lucky as well. How Einhorn connected with McDonald goes back to 2006. At that point McDonald was well established with several Tony Awards to her credit. Einhorn graduated with honors from Rice University in Texas.

“They needed someone to coach Audra,” Einhorn said. “They offered to bring me up from Houston and provide housing. I definitely knew who she was and we hit it off right away. I think the friendships you share with a performer is one of the perks of this job. This is the fourth tour we’ve done together with over nine years of concertizing together.”

“I think it’s the type of things you just sort of hope and dream, with hard work, comes success and luck. A lot of what has happened to me was a shock, especially that it happened so quickly. Then there was a moment I knew I wanted to conduct on Broadway.”

Einhorn is also recognized for his frequent collaborations with many of the musical theater world’s biggest stars, including F. Murray Abraham, Kristin Chenoweth, Barbara Cook, Ana Gasteyer and McDonald. He currently serves as music director of the new Broadway production of Rodgers & Hammerstein’s Cinderella.

While it wasn’t his goal to work with just the best, he always wanted to become a better artist. As it turns out, as he got better, he did indeed get to work with the premier vocal performers in the world.

“I learn a little bit from each of them,” Einhorn said. Each has their own incredible personality and that makes them the artist they are.” Einhorn said performers like McDonald are some of the greatest teachers we have and working with them is akin to a religious experience.

“In addition to being great artists they’re great people and that’s why they’re wholesome artists–humanitarians. Bette and Audra are both mothers, care about children and the state of the country. Of course I get to be part of their world and it’s hard to describe.”

When he’s onstage with McDonald, Einhorn said it revitalizes his spirit, as well as the audience’s spirit. He talked about the stage play “Camelot” and how when it premiered in the mid 60s, it said a lot about our social structure and that holds true today.

“When we do a show it starts out kind of light, then we deliver the big punch. We perform songs that speak to the heart, from the golden age of American theater and beyond.”

Einhorn said McDonald likes to engage the audience during her show, often introducing a song or commenting on its origin. “The great thing about Audra is nothing is ever scripted,” he said. “She has an idea of where she wants to go but no story comes out the same way twice and I’m always amused. She has such a great rapport with her audiences and it’s uncanny. There’s no way you can learn to do that, it just happens.”

“It’s a cleansing of the soul,” Einhorn said in reference to McDonald’s shows. “Audra’s shows make such a positive impression and gives the audience a chance to reboot. Audra keeps saying, ‘just be kind to one another.’ It’s so true. I’m amazed by living in New York, with some of the most simple of interactions, they can be so pleasant or charged with negativity. At the end of the day we have that choice, the ability to react the way you want, either making someone’s day or ruining it. Our job as musicians is to fulfill something within your heart.”

Einhorn said McDonald, along with a regular drummer and bass player, often do shows on their own, without accompaniment. Working with a symphony is gratifying, he said, but it can be tricky.

“It’s a bizarre experience,” Einhorn said. “We send the music ahead and this Wednesday well get in a 2 ½ hour rehearsal, do all the music presented in the two-hour show with more than 20 songs. You just don’t get that much time to work with the orchestra.”

Einhorn assembles the set, but sometimes McDonald’s chart is a little jazzier than the orchestra is used to, then some are more symphonic.

“I’m always amazed, and I know this sounds so corny, but music is the universal language,” Einhorn said. “Everybody should be lucky enough to sit where I do during a show. I can see all that’s happening. I look at the orchestra, at Audra, at the audience. I love what I do.”

At one point in his career, Einhorn worked with Academy Award winning actor, F. Murray Abraham, perhaps best known as Antonio Salieri from the film Amadeus. “He’s a great actor. As with many people, if you asked Audra, she’d tell you she’s an actor that sings. The same could be said about Midler. At the end of they day, they’re not just one thing. They show bravery by diving into something different, challenging themselves. I’m kind of that way too. Every three years I like to do something that terrifies me.”

On his off-days, Einhorn said he generally avoids music altogether as he spends most waking moments playing the piano, talking about charts. He also said he loves being a champion of the older music, old-school-stuff. “I appreciate “Hamilton” as much as the next person,” he said, “but I think we’re doing timeless shows that have a great impact on people. They respond in a favorable way. That’s what keeps us going. Like cavemen, we’re passing down traditions.”

One thought on “Classical: Audra McDonald Will Uplift Your Soul”