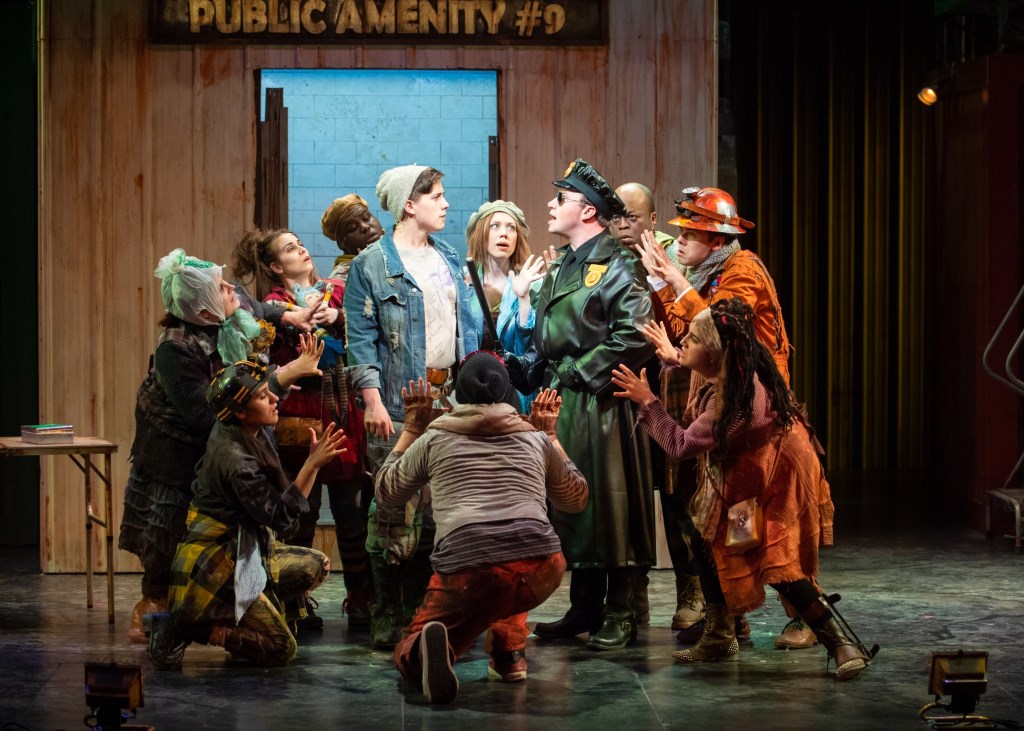 “Satire,” the famous Broadway writer George S. Kaufman once warned, “is what closes on Saturday night.” But in 2001 along came a Tony-winning musical satire that was satirizing both itself and other Broadway musicals in the bargain.

It’s boy-girl plot spoofed Broadway’s best by having the couple unnaturally cling to each other in outrageous echoes of previous romantic heights. Its vision of an urban world where we must pay to pee was a humorously grimy clash of Three-Penny Opera and Oliver! and its odes to freedom gave us Les Miserables chuckles.

It was referencing Broadway music and plots in such constant, clever self-congratulatory ways that, ever since, many of Broadway’s new musicals have borrowed its methods and spoofed genres of the past to great success.

Which is sort of sad for Urinetown, which the Skylight Music Theater is merrily staging through June 10. Intervening years and the intruding success of all these other musicals built around show-stopping, tongue-in-cheek numbers have shredded much of the originality of “Urinetown’s” methods and exposed not how clever composer Mark Hollmann and writer Greg Kotis were in the borrowing – but how derivative of other shows and of many Broadway musical theater traditions they now seem. Whatever seemed fresh about their outrageous construction of a financial empire to be made in public toilets has gone a bit flat. The “this is just a musical” asides have become familiar.

Parody may be flattery but it is a lesser theatrical form that winds up relying heavily on production values and expert singing. These indeed are often the Skylight’s antidotes — a constantly impressive staging speed and some singers who can so enjoyably send up the high notes that we know they could sing them straight. If the political message gets lost in this sort of approach, well, the patrons didn’t seem in the mood to swallow it anyway.

Artistic director Ray Jivoff is a proven master at this sort of musical juggling, keeping all the balls in the air so that we don’t notice the sleight of hand. While choreographer Ryan Cappleman builds delightfully nutty routines out of Fiddler on the Roof and West Side Story steps, Jivoff has the actors playing around with the Marx Brothers, the Three Stooges and the Perils of Pauline – some of it in the script, some of it Jivoff unleashed. There may be too much reliance on flashlight tricks and outrageous bathroom props, but it’s all done so speedily we don’t have time to yell “Retread!”

The tireless cast is enhanced by Karin Simonson Kopischke’s costumes and quick-change shortcuts. Set designer Brandon Kirkham’s skylines sometimes take too long to slide in, but they are neatly lit by Holly Blomquist. The music always sounds something like other shows you’ve heard, but music director David Bonofiglio’s four-piece band successfully mimics a full pit orchestra.

The deliberate campiness of the acting style has groaner moments – and gimmicks of screaming, leg grabbing and capering that felt beneath the talents involved. But the camp method allows some singers remarkable showcases for a variety of musical styles.

Lucas Pastrana tears the roof off as the young hero and another fine singer, Rachael Zientek, provides a comic touch that brings the essential jokes back into their romance. Amber Smith belts the grim heart out of “It’s a Privilege to Pee” while Kaylee Annable as Little Sally shows how a deliberately smaller-shaped voice can carry plaintiveness to the back of the hall.

Steven M. Koehler has been directed to be overripe in his comic manner as a Trump-like magnate willing to throw his daughter to the wolves, and Rick Pendzick as the policeman-narrator has got the skills and sarcastic tone for the role but hasn’t solved how to pop in and out of character.

In its sly way, Urinetown is always reminding us that its purpose is to have fun. On that it often delivers – but not in the sense of a musical for all ages. Just for a day or so. 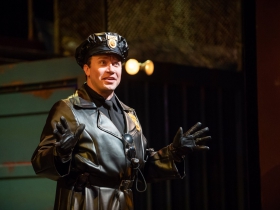 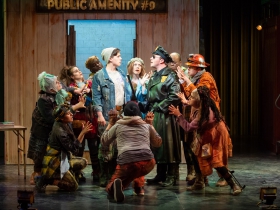 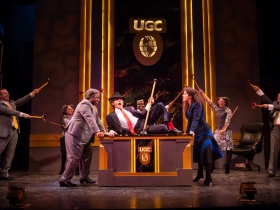 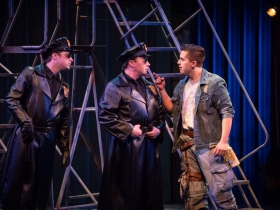 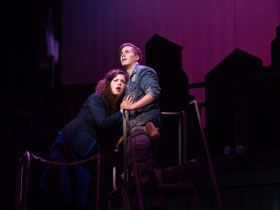 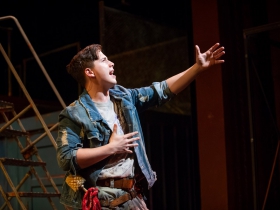 One thought on “Theater: Skylight’s Urinetown Is Fast-Paced Fun”