State would open residential assessment center for teens removed from their homes.

By Andrea Waxman, Milwaukee Neighborhood News Service - May 2nd, 2018 10:14 am
Get a daily rundown of the top stories on Urban Milwaukee 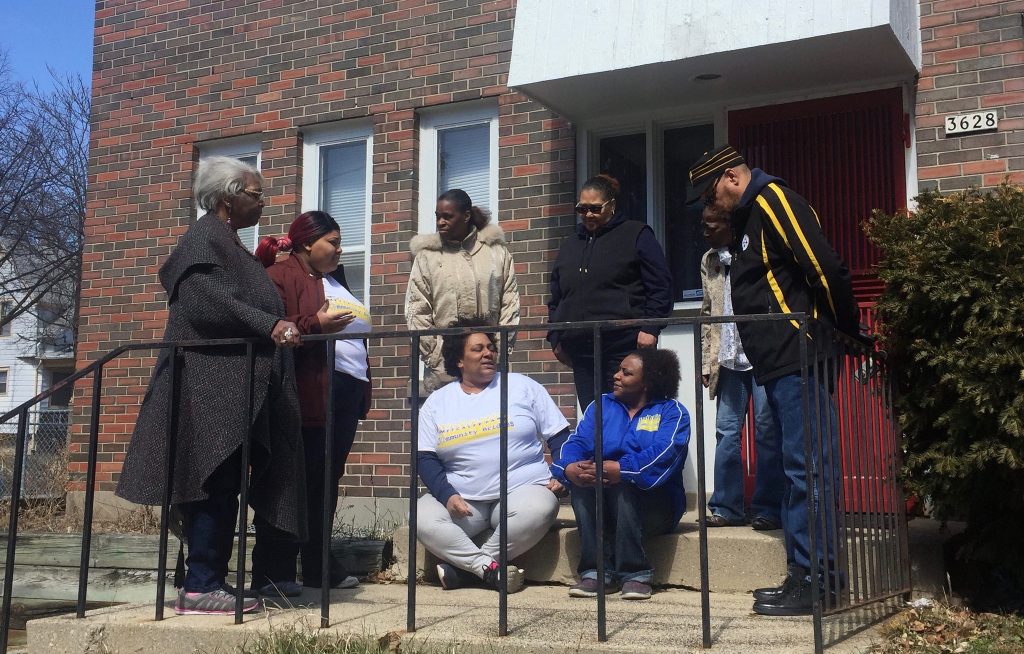 Metcalfe Park Community Bridges members gather at the vacant building being considered as a residential assessment center for youth taken from their homes for their protection. Photo by Andrea Waxman.

One day last summer two bullets came through Annie Travis’ living room wall. Fortunately, neither she nor her adult son, who lives with her on the northwest corner of 37th and Wright streets, was hit. More than 40 shell casings were found outside by police.

Travis, who has lived there for 17 years, got involved in the neighborhood association, Metcalfe Park Community Bridges (MPCB), two years ago to try to help make the neighborhood safer, more connected and attractive.

Travis and other MPCB members became concerned last spring when they learned that a vacant building at 3628 W. Wright St. on the corner across from Travis’ home, was being considered for a temporary living facility for 12- to 17-year-olds taken from their homes by Milwaukee Child Protective Services, a division of the Wisconsin Department of Children and Families (DCF), because they were in immediate danger. The group home would serve as an assessment center, evaluating children’s needs and finding them the most appropriate permanent placements.

The building, which once housed the Alma Center, a nonprofit that works with male perpetrators of domestic violence, has been vacant since March 2013. Larina Hightower, who has owned a group home on the Northwest Side for eight years, is seeking to rent the building from landlord Harold Moore.

With the resident group on one side and the building owner, prospective tenant and Ald. Russell Stamper II on the other, the controversy has simmered. It took a more acrimonious turn when residents voted against supporting the proposed facility at a community meeting on Nov. 20 and representatives from Metcalfe Park Community Bridges spoke in opposition to a request for a use variance before the city’s Board of Zoning Appeals (BOZA) at an April 5 hearing. Hightower and her company, Butterflyz LLC, must get the board’s approval before DCF will issue the license to operate a residential facility.

After hearing testimony from both sides, board chair Catherine Doyle postponed a decision on the use variance to its May meeting. The board is concerned about the increased number of such requests in residential neighborhoods — four or five each month — and about residents’ opposition to the requests around the city, Doyle said.

Doyle also noted that a recent report on sex trafficking published by the Medical College of Wisconsin found that youth in group living facilities are at high risk of being trafficked. 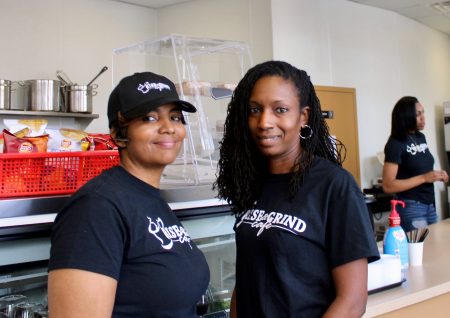 Board members are concerned that residential assessment centers such as Hightower’s, which will house up to 10 youth, appear to have no control over who will live there. They also are worried that children who have a wide array of challenges may be placed together, against their best interest, Doyle said.

Also problematic, she added, is that “the neighbors have a right to know who is going to be living in this facility in their neighborhood. According to what we’ve been seeing from DCF, it could vary,” and in a short-term facility such as Hightower’s, it will vary from week to week.

Hightower said her application was for Children in Need of Protection (CHIP), and she has requested siblings. However, she acknowledged that she would likely accept any child in the age group she serves.

Joe Scialfa, a spokesman for DCF, said that the contracts that group homes enter into with DCF’s Division of Milwaukee Child Protective Services include the right to refuse children who may not fit with other residents. But assessment centers, such as that being considered in Metcalfe Park, must take all child welfare referrals, with only a few exceptions.

Many factors — historical ill will between the landlord and the resident group, miscommunication and mistrust between the parties, frustration with the lengthy zoning and licensing process, economic deprivation and resident trauma associated with gun violence, among others — have contributed to a challenging situation for everyone involved.

“The irony of this is that these women (Hightower and her facility director, Baboonie Tatum) have spent money, they followed the process set out by (DCF)” and after more than a year they have hit another delay and possible denial by the zoning appeals board, said Moore, who owns the building at the center of the controversy. Moore, who is not a Metcalfe Park resident, said he spends most of his time at Mercy Memorial Church, where he is the spiritual leader. The church is located across the street from his vacant building.

“I was taken aback by the board’s position. If they’ve got a problem with (DCF), they should take it up with (the department) rather than ‘taking it out on’ Hightower, who is following the process they put in place,” he said.

According to Moore, Hightower and two colleagues met with residents on two occasions.  He believes that most residents do not oppose the facility. “The alderman listened to the residents … and there wasn’t that kind of opposition, otherwise it wouldn’t have gone before the (zoning) board,“ Moore said.

Moore and Hightower noted that the need for safe places for children taken from their homes is critical and Moore asserted that these children are sleeping in (DCF) offices because there are not enough facilities available.

Scialfa disputed this. “There is a need for more assessment centers, … licensed foster parents, group homes and residential care options … to find the best possible placement” to serve each child’s unique needs, he said. However, “in the vast majority of cases a suitable placement for a child is found within a few hours.”

“Sometimes this process may run into the late evening hours. In a very, very rare instance finding a placement for a child who has been removed from their home for their own protection might cross over into the next day. If that were to occur, a child would stay with the after-hours team at the Division of Milwaukee Child Protective Services, Children’s Hospital or Saint A.” This has only happened once in 2018, Scialfa said.

He noted that the number of children being taken from their homes “has greatly increased over the last few years nationally and in Wisconsin.”

Hightower and Tatum were both special education teachers for 15 years and said they are motivated to help youth. They are dismayed by the process to open a facility in Metcalfe Park and the opposition of neighbors, who they argue expect troubled youth to get help but not in their backyard.

Hightower said she has invested more than $18,000 in repairs and repainting to bring the prospective group home up to code and pointed to the success of her original facility.

“At our current facility we keep our residents totally busy. Nothing that we do spills out into the neighborhood,” she said. Her staff transports youth to many off-campus activities, she said. “We have all different types of kids. It is in a nice neighborhood and we don’t cause any trouble there.”

Hightower noted that neighborhood opposition to her original group home has disappeared because she created a resident advisory board to stay in close touch with neighbors and because the lack of problems has allayed their fears.

She said that she would operate the new group home the same way, with 24-hour security and two staff members on every shift. In addition, she said she has arranged with the I Will Not Die Young Campaign, artist William Muhammad and the Nation of Islam to work with the residents.

Though youth in crisis can be challenging, Hightower said, she and her staff “are willing to do the work. I believe there is no such thing as a lost youth.”

Members of Metcalfe Park Community Bridges said they are concerned about traumatized children being placed in a neighborhood plagued with gunshots. And they fear the teens will further disrupt an already challenged part of the neighborhood.

They also distrust Hightower and her partners because they did not come to their organization initially, but approached Sherman Park community representatives first. In addition, Hightower and her colleagues were not prepared to fully answer residents’ questions, MPCB members said.  There were also mistakes — an incorrect address and group home business name — in meeting notices Stamper sent to residents.

Travis said Hightower and her staff lied about their intentions when she initially asked what they were doing at the vacant building. There also is disagreement about when that conversation took place.

Travis conducted a door-to-door survey of residents living near the proposed facility and reported that 60 out of 70 opposed it. Stamper also took a vote to gauge opposition at a community meeting he organized but when asked by a reporter, did not report the result. MPCB says Stamper counted everyone present, not just residents, and waited until after some attendees had left before taking a count.

“He said it was 18 for and 19 against but there were not 40 residents in the room said Danell Cross, MPCB staff coordinator. “We counted 13 against and 11 for.”

Cross started working as an organizer in Metcalfe Park in 2012, when she lived in the neighborhood. She said that the process of opposing the facility has set the neighborhood back in terms of progress residents had made toward working together to solve their problems and advocate for their interests.

”The April 5 zoning board hearing was “an example of people doing to a community instead of working with a community. I felt that the community’s voice was overshadowed by position and by power and by class,” Cross said.

The resident group is concerned that Stamper spoke in favor of the facility at the zoning board hearing because of his relationship with Moore.

Prioritizing Moore and Hightower over “constituents of a lower socio-economic class, (indicates that) he identifies more with business owners than with the people that he is supposed to serve,” Cross said.

In an email response, Stamper thanked Cross for her commitment to this issue and wrote, “While she has concerns, rightfully … about a building, as alderman I was elected to care about the wellbeing of the entire district.” That includes children in need of protection, who “deserve a loving environment to ensure their success, just like my kids or yours.”

Stamper added that the facility would not only offer “excellent services to kids in need,” but stabilize the neighborhood.

“I listened to both sides of the issue, held meetings, sifted through the material, delayed the (zoning board appeal) and finally asked for it be scheduled. Ultimately, after much deliberation, I felt comfortable not opposing the proposal.”

The Board of Zoning Appeals is expected to announce its decision on the use variance at its monthly meeting May 3.