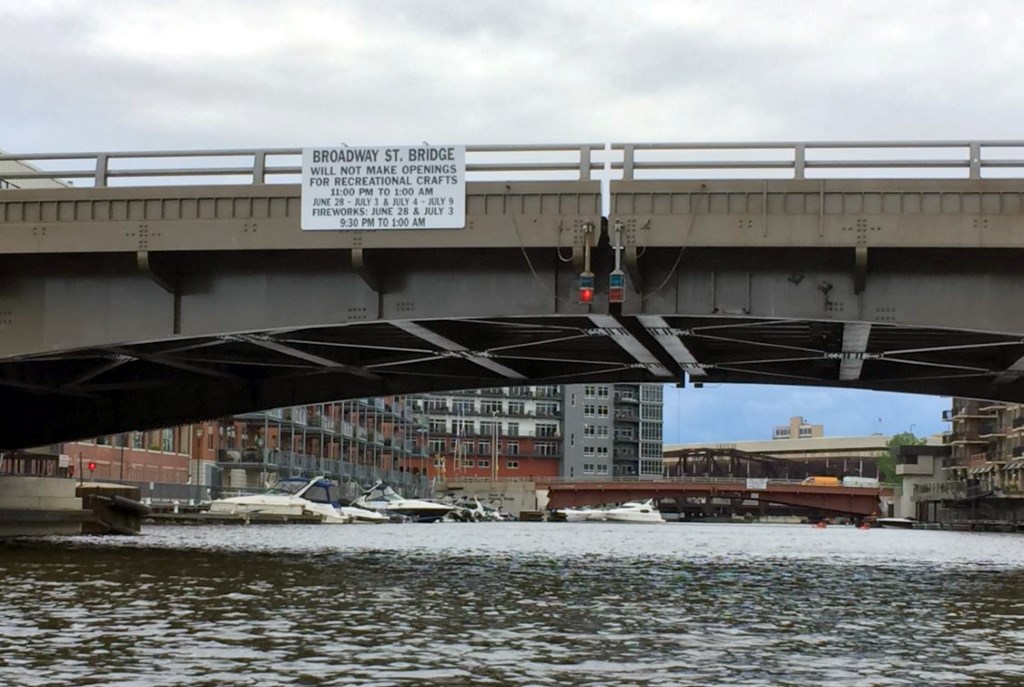 The increase is due to a confluence of factors including higher Lake Michigan water levels, a strong economy and a growing number of waterfront businesses. The river level is up two feet since 2014, causing an increasing number of boats to require bridge openings to navigate the rivers.

And while waterfront business owners are certainly happy to see people enjoying the rivers, the city now must grapple with rush hour congestion and angry neighbors. On the Milwaukee River’s busiest days, key bridges through downtown may raise 60 times, closing the crossing street for approximately 4.5 hours. The proximity of intersections to bridges can cause traffic backups that span many blocks and go in both directions.

Compared to its peer cities, the issue is particularly acute in Milwaukee. A city study has found that in the United States only Chicago has more movable bridges. They’re not cheap either. Milwaukee spent $2.3 million on bridge operation and maintenance in 2017, and spends millions more every time a bridge needs to be rehabilitated. Federal regulations prevent the city from passing those costs onto boaters with a fee.

As a result, the Common Council and Department of Public Works have begun exploring expanding periods in which bridge openings are restricted and other methods that could balance the federally-protected right of boaters to freely use the river with that of thousands of Milwaukee drivers, bus passengers, bicyclists and pedestrians who cross the city’s many bridges daily.

The issue was hotly debated before the council’s Public Works Committee on Wednesday morning with nearby residents and boaters testifying on both sides of the issue. Almost all speakers agreed that some change should be made, but specifically what wasn’t clear. And all seemed to agree the congestion shows the success achieved by Milwaukee in spending millions in public and private investment to improve its rivers. “It’s a good problem to have,” said Alderman Nik Kovac.

The city is currently required to open bridges upon request for any regularly scheduled service of a boat permitted to carry 50 or more passengers, which includes boats operated by Milwaukee Boat Line and Edelweiss/Milwaukee River Cruise Lines. The city has little control over when those boats can leave, but a report indicates the operators of both lines have been amenable to moving their scheduled runs outside of the 4:30 p.m. to 5:30 p.m. rush hour.

Recreational and commercial boats with smaller capacities are subject to city regulations approved by the Coast Guard that prevent bridge openings between 4:30 p.m. and 5:30 p.m. However, it’s not clear how stringently that rule has been enforced. The city intends to do a more rigorous job of enforcement in 2018, and the council is exploring an expansion of that prohibited period for bridge closings.

The city, however, does not control its own destiny on this. Almost any change in its policy will ultimately require the approval of the U.S. Coast Guard which regulates navigable federal waters. The city will need to submit a traffic study to show the number of people impacted, including riders of the 14 Milwaukee County Transit System bus routes that regularly cross downtown bridges.

The city is still at least a month from advancing any changes. The file before the Public Works Committee is purely a communication file used to solicit information from the Department of Public Works and the public, not a directive or ordinance change.

Committee chair and area alderman Robert Bauman floated the idea of making the restricted period three hours long, something that drew substantial opposition, but did elicit a lot of feedback on various changes that might be more acceptable.

One potential change that almost everyone seems to agree won’t work is opening the bridge only at scheduled 30-minute intervals.  “You would have more problems through the intersections where it’s really backing up,” said Craig Liberto, Engineer in Charge of Bridges and Buildings for the city. The openings would become very long as boats would have entered long queues anticipating the opening. Others warned of collisions that would occur on the water from boats clustering near the busiest bridges.

Bells of the Milwaukee River

Temporary street closures aren’t the only conflict between boaters and downtown residents and workers.

The bells accompanying an opening are drawing the ire of residents of condominiums and apartments that live near the most active bridges.

Following a pilot project, the city that will reduce the number of bells on bridges from four to two on bridges nearest residential buildings and reduce the bell ringing from approximately five minutes to one minute per opening.

This initial move is drawing the support of attorney Kelly Condon, who lives near the Wells St. bridge. Condon, who has been one of the leaders in promoting changes in city policy, told the committee: “I’m just asking for a solution that allows all of us to enjoy downtown Milwaukee with a little common courtesy.”

The Department of Public Works is planning a handful of other changes to how it operates bridges this year. When bridges open, close and then are requested to open again, the city will keep the bridge closed for at least five minutes. Controls are also being changed on the Wisconsin Avenue bridge that should save 85 seconds per closing. Those changes will keep downtown’s main street open an additional 86 hours per year. The rehabilitation of the Wells Street bridge will also yield a bridge that opens and closes faster when it reopens in early 2019.

11 thoughts on “Eyes on Milwaukee: Downtown Bridges Cause Mounting Traffic”