She even won Sauk County, home base of Michael Screnock.

By Gretchen Schuldt, Wisconsin Justice Initiative - Apr 4th, 2018 11:12 am
Get a daily rundown of the top stories on Urban Milwaukee

State Supreme Court Justice-elect Rebecca Dallet made deep inroads in Trump territory as she swept to victory Tuesday against Sauk County Circuit Judge Michael Screnock, who was crushed even in his own county.

In far western Wisconsin, Dallet won in Chippewa, Dunn, St. Croix, Pierce, and Pepin counties, all of which voted for President Donald Trump in the 2016 election.

Dallet also swept through the southwestern part of the state, picking up Vernon, Crawford, Grant, Richland, Sauk, Iowa, Columbia, and Lafayette counties, flipping them from Trump. 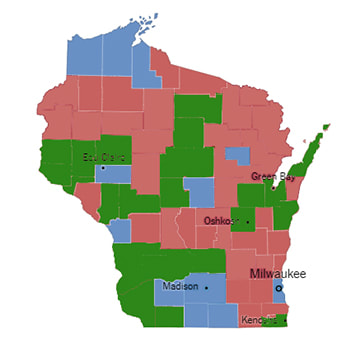 In the east-central part of the state, Winnebago, Outagamie, Brown, Manitowoc, and Door counties went for Dallet after supporting Trump.

She also picked up Trempealeau, Jackson, Wood, Marathon, Lincoln, and Oneida counties in west- and north-central Wisconsin, all of which went for Trump  in 2016.