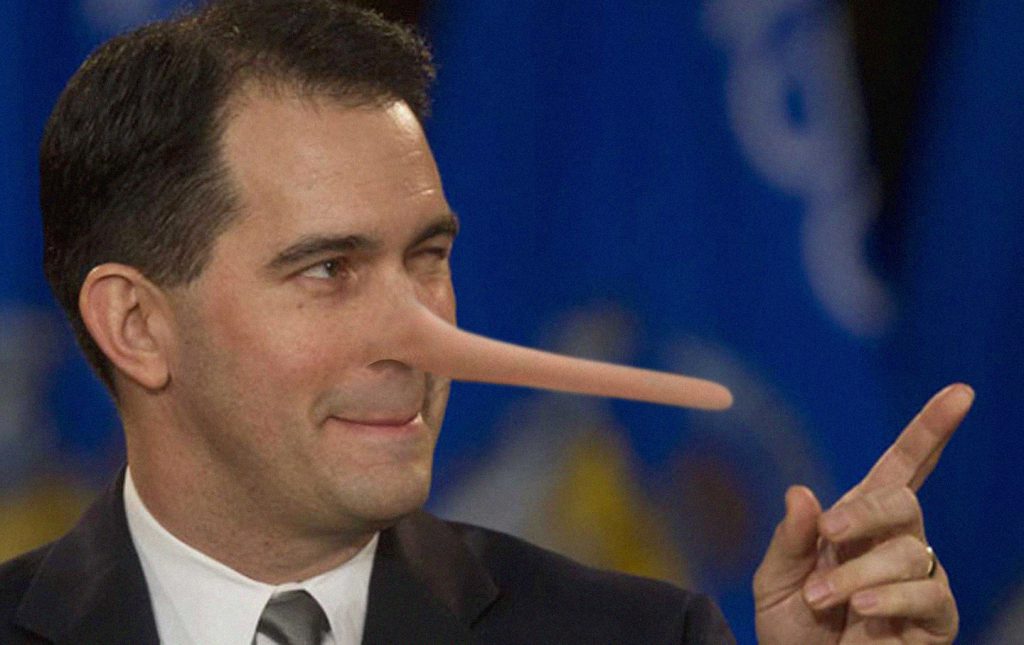 Since December, Gov. Scott Walker has been telling a lie about why he wouldn’t hold special elections. The governor refused to call special elections after two Republican lawmakers, Sen. Frank Lasee of De Pere and Rep. Keith Ripp of Lodi, announced they were taking jobs in the Walker administration on December 29 of last year. Walker said he was doing this to save the taxpayers money. To hold special elections would be “an unnecessary waste of taxpayer resources,” he has repeatedly insisted since then.

In fact, the governor had plenty of time to call the special elections and add them to the normal February primary and April general elections — in fact this was more time than he allotted when calling a special election after then Republican state Sen. Sheila Harsdorf joined his administration. And what would a special election in the normal spring election cycle have cost taxpayers? Zero. There would be “no additional cost,” says Reid Magney, public information officer for the Wisconsin Elections Commission.

And by February or next week Tuesday at the latest, these districts would have had new representatives. With no cost to taxpayers. Instead, Walker has repeatedly refused to hold special elections, only giving in yesterday, after three different courts ruled he was violating the state law requiring elections. So what will this cost us?

The last election held in the now vacant 1st Senate District cost taxpayers $234,876 in the Spring 2017 election, while the cost of that election for the now-vacant 42nd Assembly District was $71,730, according to the Elections Commission. That’s a combined cost of more than $306,000. Magney, however, notes the cost for a special election won’t be as high because the turnout will be lower.

But that’s not all, because Walker was sued by former U.S. Attorney General Eric Holder and the National Redistricting Foundation for refusing to hold special elections. And rather than accepting the inevitable and agreeing to hold the elections, Walker instead had a team of lawyers defend the state.

Those lawyers had to represent the state in a case before Dane County Circuit Court Judge Josann Reynolds, followed by an an appeal before Dane County Circuit Court Judge Richard Niess, followed by an appeal to District 2 Court of Appeals Judge Paul Reilly in Waukesha, who left in place the lower court decision that special elections must be held.

What did all this lawyering cost the taxpayers? I contacted the office of both Gov. Walker and Wisconsin Attorney General Brad Schimel, who assigned Assistant Attorney General Steven Kilpatrick to defend the governor, and neither office would reveal how many lawyers worked on this case or what the cost to taxpayer was.

Nor is that the end of the costs. For Walker had urged the legislature to hold a special session to change the law, which means taxpayers would have had to pay “per diem” costs of $184 per day to any legislator outside Dane County for each day spent in Madison to pass a law preventing people from having duly elected representatives. Just one day of legislating would have cost in the neighborhood of $18,000.

Walker, it seems, was willing to charge the taxpayers whatever it took to prevent elections from being held. Why? Because the Democrats have been outperforming Republicans across the country in special elections. A January special election for an open seat in Wisconsin saw Democrat Patty Schachtner win in a heavily Republican district by increasing the Democratic percentage by 18 points over the previous election.

While Walker hoped to convince average voters he was trying to save them money, insiders in both parties all knew why he opposed special elections. As Jay Heck of the nonpartisan Common Cause of Wisconsin noted to Urban Milwaukee, “Walker feared that a special election held in the 1st State Senate District and the 42nd Assembly would have produced Democratic victories which, in turn, would bode ill for his own re-election prospects.”

To protect himself and his party from this, Walker wasn’t just willing to charge taxpayers all these unnecessary costs. He was willing to disenfranchise the 175,000 citizens living in these two vacant districts for more than a year, from December 29 of last year until January 7, 2019, when the new legislators elected in November 2018 will be seated. And these, by the way, are both Republican-leaning districts.

Voters in these districts have thus lost any say over all state government decisions made over this entire period, as Walker and the legislature have debated a host of issues, from gun control to a sales tax holiday, from health care reinsurance to closing Lincoln Hills school for boys to tax breaks for the Kimberly-Clark company.

But most egregiously, these citizens would have had no representation if the legislature, as urged by Walker, had passed a new law preventing these districts from electing new representatives in a timely fashion. “They have no say in that bill at all,” Judge Niess marveled in his decision rejecting Walker’s appeal.

The obvious lies by Walker call to mind Pinocchio, of course, but there is far worse comparison to be made in capturing the depths to which Walker and the Republicans have sunk. Walker’s partisan scheming meant the citizens of these two districts would pay at least a year’s worth of state sales taxes, income taxes and other state fees but would have no political representation. As every American who took grade school history knows, this is taxation without representation.

And “taxation without representation is tyranny,” as the colonial leader James Otis declared.

We could argue whether the democratic infringement of Wisconsin’s citizenry by Gov. Walker is as bad as that imposed by the imperious King George III. Perhaps not. Though it’s worth noting the colonists had local governments that made many decisions, and merely needed to suffer the occasional imposition of a stamp tax or a tax on tea by their distant colonial overlord. Whereas the residents of these two Wisconsin districts were losing all say over all state government decisions made over a one-year period.

But the idea the such a comparison could even be broached speaks volumes about how virulently partisan a governor we now have, and how tone-deaf a long-savvy politician has become in his desperation to win another term of office.