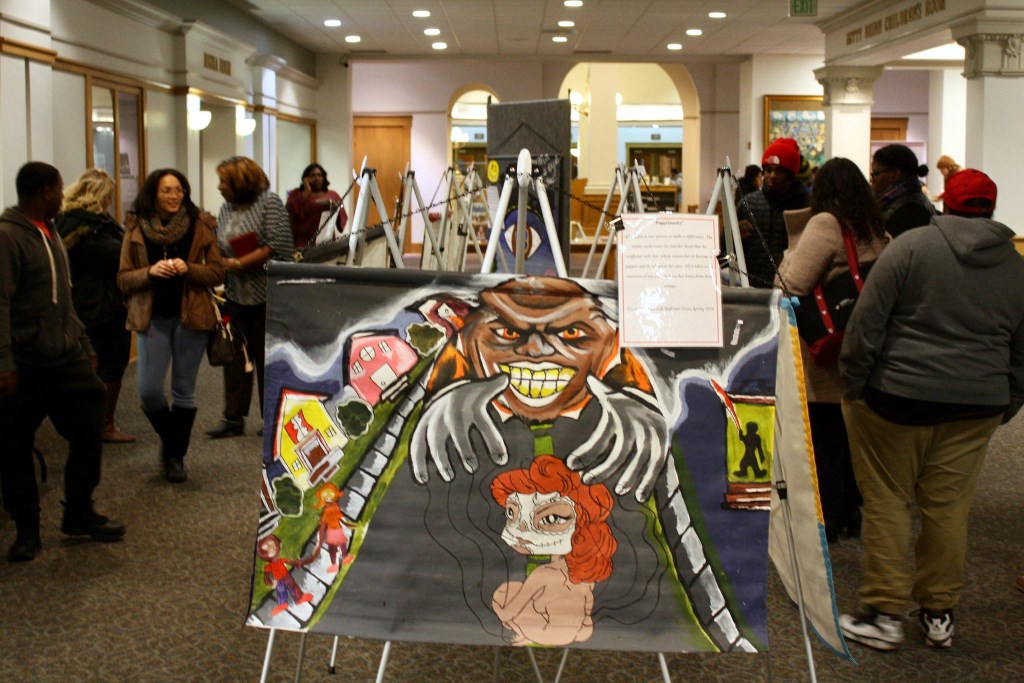 Bianca Williams had just turned 13 when her mother kicked her out of the house. With nowhere to go and no one to support her, Williams turned to exotic dancing, working clubs and private shows to provide for herself.

“My whole immediate family pretty much came from that lifestyle so I thought that was the only thing that I could be, because that’s all I saw growing up,” Williams said, adding that she was “groomed into the dancing field” by her mother and grandmother, who put her mother out at 13, too. 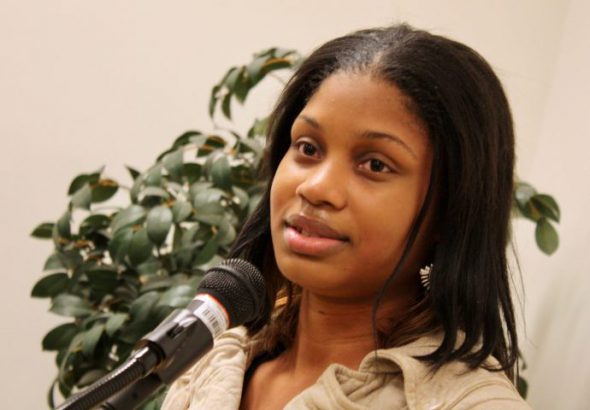 Bianca Williams, a former exotic dancer and founder of A Cry for Help Foundation, which helps girls escape from trafficking, spoke at the event. Photo by Jabril Faraj.

She said no one seemed to care. Even when she became pregnant for the first time at 17, doctors didn’t look into the situation. “Someone needed to say something — someone needed to intervene and talk about what was going on.”

Williams wanted to get out, and she wanted to help other girls and family members get out too. So, at 21, she founded A Cry for Help Foundation, which provides girls with the resources and support to escape the world of human and sex trafficking; Feb. 13 marked five years since Williams stopped dancing.

Williams was the featured speaker at a recent youth art exhibit focused on human trafficking.

The showcase featured art produced by middle and high school students that “portrays the dangerous trafficking world,” according to the Neu-Life website. The artwork, created in Neu-Life’s ARTREACH program between 2012 and 2016, illustrates multiple themes. They include how perpetrators prey on young people, how human trafficking turns people into objects for profit, how difficult it can be for victims to leave and that not only girls are at risk. The Feb. 6 event was sponsored by Neu-Life Community Development, Milwaukee Public Schools and the Zonta Club of Milwaukee. It was held at the Milwaukee Public Library Central Branch.

Human trafficking is a $150 billion industry with more than 120 million victims worldwide, according to Donna Neal, a member of the Zonta Club, which advocates on behalf of victims and works with legislators to combat trafficking. State Sen. Lena Taylor, who attended the event, referred to Milwaukee as “a hub” of sex trafficking.

According to a Milwaukee Neighborhood News Service report, 133 Milwaukee children were trafficked, or suspected of being trafficked, in 2014 and 800 youth in Milwaukee who are homeless, have run away or received emergency support services are at risk for sex trafficking. However, data can be hard to come by because of the industry’s secretive nature.

Milwaukee’s poverty rate is about twice the national average.

Ayanna Martin, 17, said she didn’t know too much about the issue until she went through the Neu-Life program in summer 2016. She called trafficking “depressing,” “frustrating” and “sad,” adding that it is “way more than just prostitution.”

“You’re working for people; you’re making money for someone; your body is the item that’s being sold,” Martin said.

Martin and Quaveion Brown, 18, who participated in the program at 15, said it was “shocking” to hear the stories of trafficking survivors. Brown said he wants people to know that young people need support. “It’s not easy to go through this alone,” he said.

Attendees called the exhibit “thought-provoking” and “powerful.” They said it’s important for parents and community members to ask questions and create an environment where young people are comfortable enough to confide in a trusted adult. Providing resources, support and looking out for each other is also important, they said.

“Your heart breaks,” said Cathy Lathrop, 69, a Shorewood resident. “It doesn’t take much for some circumstances to put a kid in a vulnerable spot.”