Wisconsin instead picks winners and losers. How is that working?

I once attended a talk by George Stigler, a Nobel-winning economist who was widely viewed, and who viewed himself, as a conservative, and given to a business audience. At one point, he told the audience that If they announced, as a matter of principle, that they would no longer accept government subsidies, he would send a letter praising their high-mindedness, and sell their stock short.

What does it mean to be “business friendly”? Stigler’s comments point out that there are at least two meanings of the term. One is friendly to particular businesses, helping them become profitable. The other embraces the free market, which can often be very unfriendly to some businesses.

In 1776, a memorable year, Adam Smith published his Inquiry into the Wealth of Nations. Despite his later reputation, Smith had no illusions about people in business:

It is not from the benevolence of the butcher, the brewer, or the baker that we expect our dinner, but from their regard to their own interest.

Smith wrote to refute “mercantilism,” a term he coined to describe the system of political economy that sought to enrich the country by restraining imports and encouraging exports. While today Smith is considered one of the founders of modern economics, he failed to convince the British parliament, which passed heavy duties on the import of grains into the British isles. These laws, called the “Corn Laws,” helped lead to the Irish potato famine. (While the impact was most devastating to Ireland, its effects were felt throughout Britain. My Thompson great-grandfather was part of the exodus from Scotland to the New World.)

Smith came down very firmly on the side of the consumer:

Consumption is the sole end and purpose of all production; and the interest of the producer ought to be attended to, only so far as it may be necessary for promoting that of the consumer.

Despite Smith and those who followed him over the following two-and-a- half centuries, mercantilism is alive and well today. One sign is the tendency of governments to pick winners for tax breaks.

The next graph shows the distribution of non-farm jobs in Wisconsin, according to surveys by the US Bureau of Labor Statistics. The first number is the number of jobs in thousands. The second is the percentage each represents of the total. 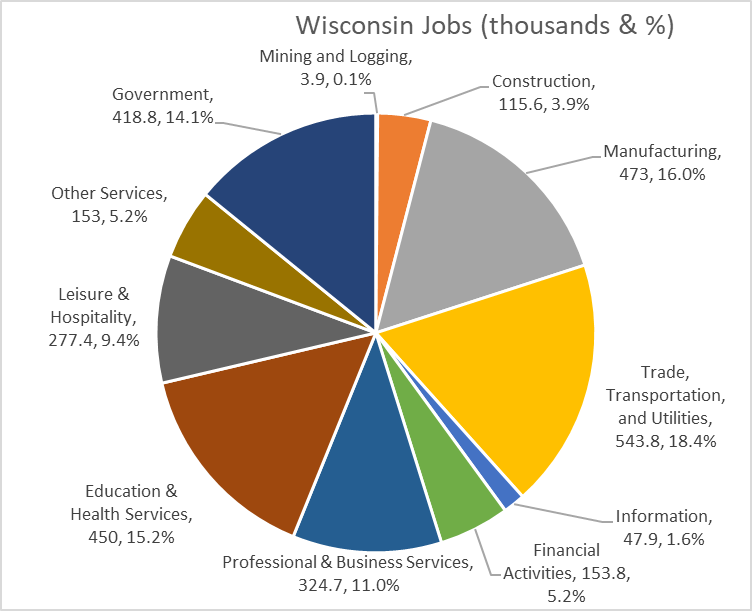 The smallest category is mining and logging, at 3,900 jobs—0.1 percent of total Wisconsin non-farm jobs. If the categories were established today, mining and logging would likely not have rated a separate category. Yet mining is one of two categories that enjoys special solicitude from the Wisconsin governor and legislature, even to the extent of allowing mining lobbyists to rewrite Wisconsin laws to weaken environmental protections.

The other category that has received particular concern from Wisconsin’s government is manufacturing.  With 16 percent of Wisconsin jobs, and 14 percent in the Milwaukee metropolitan area (see below), manufacturing jobs form an important, but hardly dominant sector. 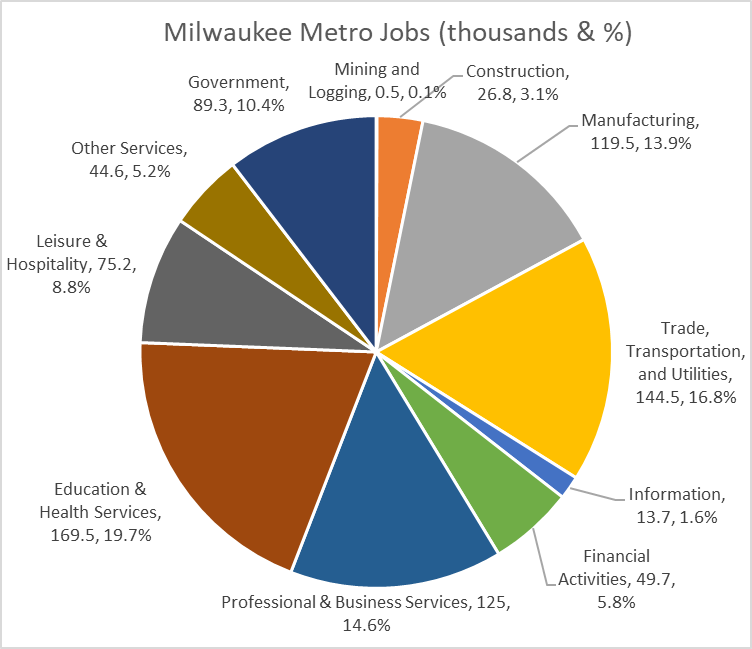 Wisconsin has been particularly solicitous of manufacturing. The Tax Foundation has calculated the effective tax rates for various types of business in each state. The foundation, which skews conservative, rates Wisconsin as having the 15th lowest taxes among all states for capital-intensive manufacturers, likely stemming from the Manufacturers and Agricultural tax credit. 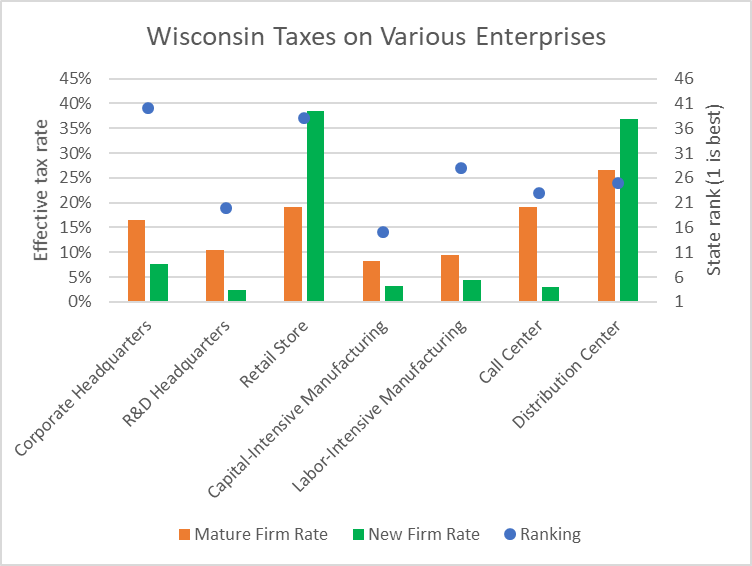 One justification for singling out manufacturing for special aid is that it historically offered higher pay. It allowed people without a college education to gain entry to the middle class. But that has been changing.The next chart shows average pay for production workers in Wisconsin, Michigan, Illinois, Ohio, and Indiana, the Midwest states where manufacturing played a dominant role. I adjusted the dollars to their value in 2017 dollars. It appears that pay in the five states is converging to a number around $21 per hour, or $42,000 per year if there is no overtime. 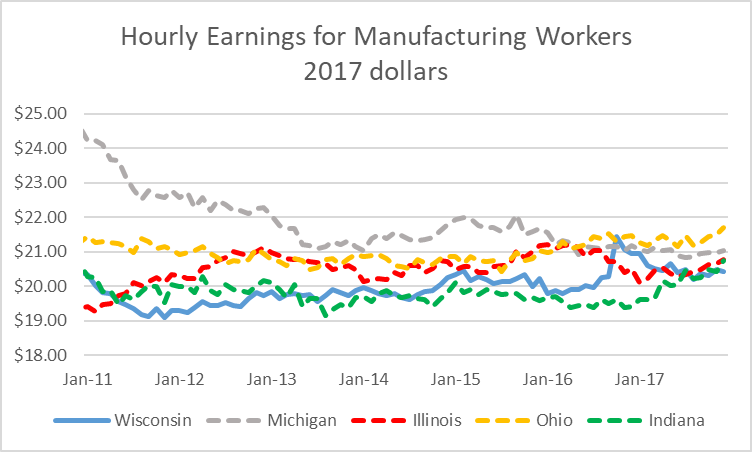 Particularly notable is the decline in Michigan. I suspect this may reflect the decline in union membership and influence, as well as its dominance in the world auto industry.

How effective have state’s efforts to attract manufacturing jobs through low taxes been? The next chart shows the number of manufacturing jobs (in thousands) since 2011 in the same five states. As the US economy clawed back from the Great Recession, four of the five states have seen an increase in jobs. The exception is Illinois whose legislature and governor have spent much of that period arguing about how to deal with its underfunded public employee retirement obligations.

Wisconsin, while seeing some growth, has lagged other states, particularly Indiana. 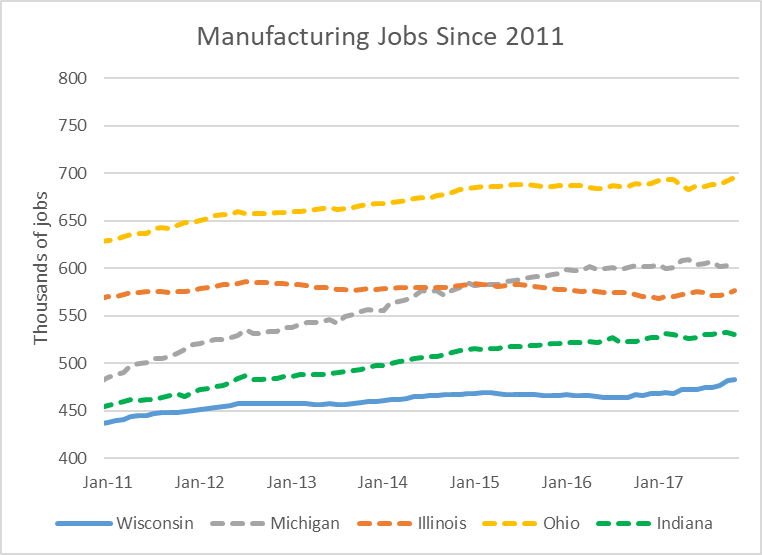 Comparing state manufacturing job growth with state tax rates, it is hard to see any consistent pattern. It is not clear what, if any, role taxes play in job growth. The following graph shows the Tax Foundation’s calculation of the tax burden on four categories of manufacturers. Combined with the previous graph, it offers evidence to both support and contradict the proposition that low taxes lead to growth.

For example, Indiana has the highest taxes on three of the four manufacturing categories; yet, it had the highest percentage job growth over this period. Conversely, Wisconsin does not appear to benefit from its generous credit on manufacturers. 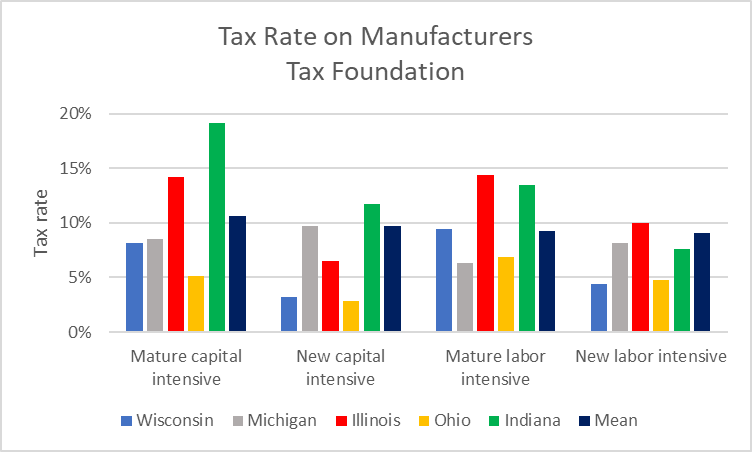 A comparison of state business tax rates ignores the increasingly large one-time deals to convince companies to move to a state, or to stay in the state. The size of Wisconsin’s deal with Foxconn stunned many observers. According to an analysis from the Journal Sentinel its $200,000 per job promised is more than eight times as much per job as similar Wisconsin job subsidy deals. Yet, a tweet from Governor Walker suggests the Foxconn deal may become the new norm:

To keep 600 jobs here in Wisconsin, I asked the Wisconsin Economic Development Corporation to offer Kimberly Clark the same deal for jobs as Foxconn.

It is hard to argue with voters in the Fox Valley that they should subsidize industry in Racine County and not get similar subsidies when their jobs are at risk. See a recent Post-Crescent article in which Fox Valley Democrats propose aid to keep paper industry.

There are several problems, however, in a return to mercantilism. If it succeeds in influencing corporate decision making, it distorts economic decision-making. Conversely, if the corporation makes the same decision it would have made anyway, it represents a transfer of wealth from taxpayers to corporate owners and managers, helping to increase inequality.

Subsidies to employers leave government entities with fewer resources to supply public goods that help attract companies and their employees. For example, the recent proposal from the Milwaukee County Parks to charge for parking is enormously unpopular. It can be viewed as the result of the continuing decline in state aid to the county, a decline resulting from the need to fund corporate subsidies while fulfilling promises to reduce taxes.

Corporate location decisions are increasingly influenced by quality-of-life issues. That pattern is increasingly true of new enterprises: people start firms where they already live. Ironically, then, the race to subsidize favored firms may make Wisconsin less competitive in the long run.