By Jabril Faraj, Milwaukee Neighborhood News Service - Jan 30th, 2018 09:10 am
Get a daily rundown of the top stories on Urban Milwaukee 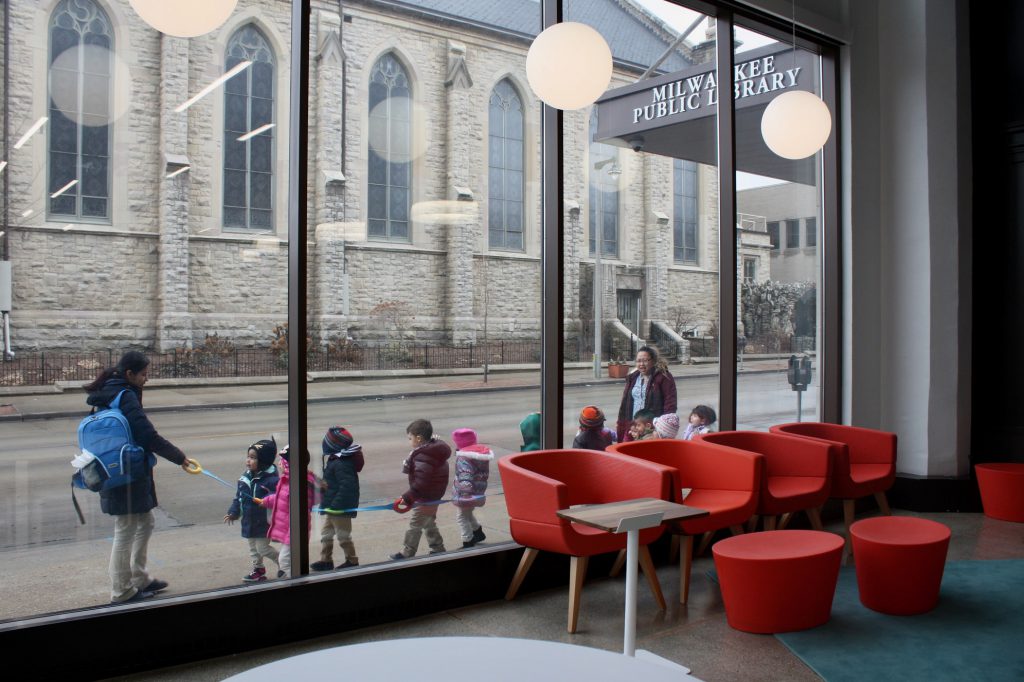 Editor’s note: This article is one of an occasional series profiling the 12 finalists for the Milwaukee Awards for Neighborhood Development Innovation (MANDIs). The Mitchell Street Library/Alexander Lofts is a finalist for the State Farm Building Blocks Award for a real estate project that advances the community.

Sirena Hernandez, 21, went to the old Forest Home Library, 1432 W. Forest Home Ave., almost every day when she was in elementary school. She did her homework there, played games on the computers and socialized with friends.

On a recent Thursday morning, Sirena sat with her mother, Candida Hernandez, at a table rigged with six brand-new laptop computers at the new Milwaukee Public Library Mitchell Street Branch, which replaced Forest Home last fall. Her brother, Marcelo, 15, and 3-year-old son Noah were also with them. As a family, they just recently started coming to the library again.

“I notice that, now that we’ve been coming, he loves reading,” said Sirena of Noah.

The mixed-use development was completed over the course of a highly publicized process that included community meetings at the space where the library is currently housed. Sixty market-rate apartments fill the floors above and an old cold storage building in back. It is the neighborhood’s first apartment development in the last 40 years that is not income-restricted. 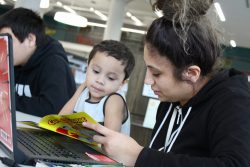 The building, located at 906 W. Historic Mitchell St., was built in the early 1900s and has served as a department store, hardware store and, in the ‘80s, included a punk rock nightclub. Most recently it housed the Hunger Task Force, the state and county probation office, and a Social Security office and unemployment center.

The library, located on the building’s ground floor, boasts historic railings, columns and a marble floor intermixed with computer stations, a bilingual catalog, numerous charging outlets and free wireless internet. The hope was that the state-of-the-art library space and upscale apartments would provide “a significant economic impact” to the surrounding area, according to developer Gorman & Company’s Wisconsin Market President Ted Matkom.

The census tract in which the development is located is one of Milwaukee’s youngest, with a median age of just over 24. It is also one of the city’s poorest. The area’s median household income of $22,591 is less than half of the median income in Milwaukee County. Forty-six percent of residents and 62 percent of children live in poverty.

Ald. Jose G. Perez called the project “a home run,” and “the envy of a lot of my colleagues.”

“It’s been part of what I consider the renaissance [of] Mitchell Street,” he said.

Nancy Bush, director of Historic Mitchell Street Business Improvement District #4, added, “We had this dark building at night; now we’ve got light, we see people coming and going — kids, teens, parents with their families. This particular project, in the 10 years I’ve been here, is the best thing that has happened to our commercial corridor.”

“I haven’t had a library card in years,” said Candida Hernandez, 41, as she uses a computer to search for jobs. Hernandez, who has worked as a cashier, housekeeper and waitress, has been unemployed for about a year. Hernandez lives near 21st and National with her mother. “It is real hard,” she added.

Wenona Lee Gardner, who lives blocks from the newly opened library, called it, “a lifeblood.” Gardner said she lives on about $575 a month in disability benefits, sharing a one-bedroom apartment to lower her living costs. 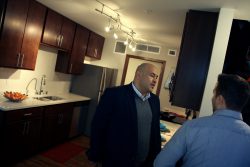 Ald. Jose Perez speaks with a visitor to one of the model townhouse apartments. (Photo by Jabril Faraj)

Gardner is highly engaged in the community. She leads weekly workshops on “The Artist’s Way” — a book she got from the library — and recently launched her own business. She is also taking online classes in media design, which she wouldn’t be able to without the internet access the library provides.

The project would never have happened without the 60 apartments, which were used to close a funding gap of $5 million, according to Matkom. A one-bedroom unit in The Alexander Lofts costs at least $995 a month and a two-bedroom goes for a minimum of $1,225. According to Matkom, other area one-bedrooms — market rate or rent-restricted — go for $550 a month, and a typical two-bedroom rents for $650.

“By leveraging the public library as this amazing public asset … we could attract higher incomes to this severely distressed neighborhood and charge people rents that are double what were currently in the neighborhood,” Matkom said. The apartments are expected to bring people with higher incomes to the retail corridor, which will benefit businesses along Mitchell Street, according to the development company.

Tomeitha Moore, 50, a resident of the lofts, moved to the building because of the convenience and amenities, including a workout room, community room and more, she said. Moore works for the Wisconsin Department of Corrections.

Moore, who lives with her partner, a teacher, called the apartments “affordable for those who are working.” She believes both the Alexander’s higher-income residents and nearby businesses, which she described as having “very reasonable” prices, will benefit from the new development.

Gardner said it’s “always a concern” that at some point she may not be able to afford to live in the neighborhood where she grew up. Just recently, her Medicare costs increased and her monthly food stamp allotment was reduced by about half.

Sixteen percent of housing units in the census tract are unoccupied, twice the rate of Milwaukee County. The lofts are already 90 percent full, according to Matkom.