Classic Eschweiler Home Back on Market 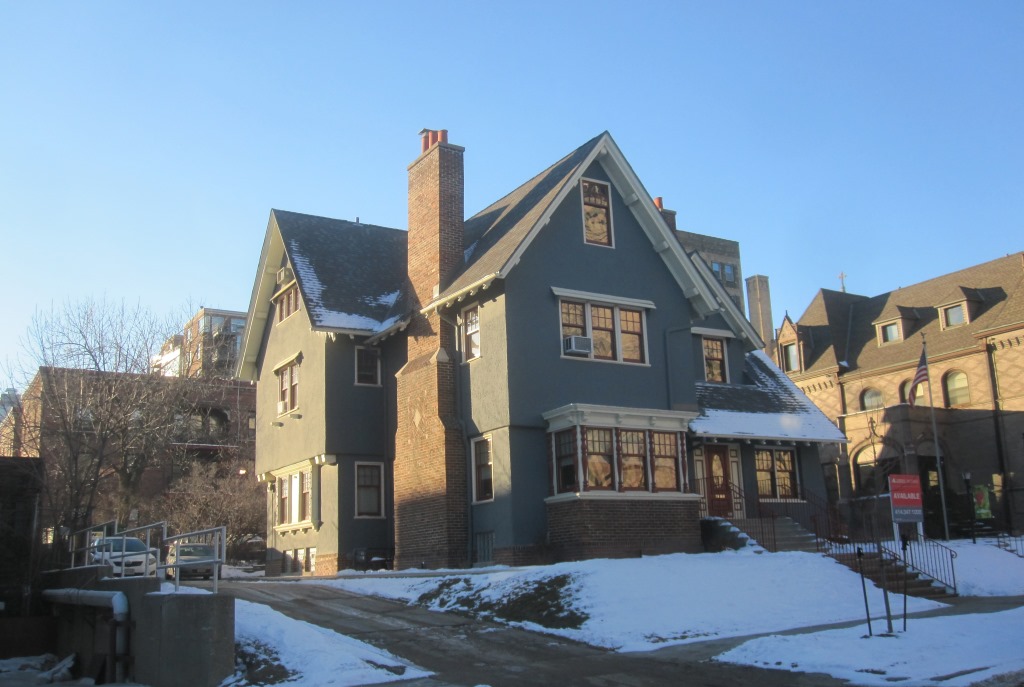 Classic Eschweiler Home Back on Market. Photo by Michael Horne.

At the time, Mrs. Miller, age 67, had been for thirteen years the widow of Atty. Benjamin Kurtz Miller, Sr. [1830-98]. Miller was the son of Andrew G. Miller, who was appointed to the Wisconsin Territorial Supreme Court by President Martin Van Buren in 1839.

Widow Miller was in no immediate need of new housing, since she had been comfortably ensconced since 1880 in a mansion one block to the west at 559-Marshall St. In 1910 she lived there with her bachelor stepson, a retired attorney named Benjamin Kurtz Miller, Jr., age 52, and three servants.

The servants were to follow Mrs. Miller to the new home a block away. B.K. Jr. did not. In the 1920 census, he was recorded as “a lodger in Milwaukee, Wisconsin who had no occupation.” We’ll visit B.K. Jr. later, but first let’s follow Mrs. Miller and her servants to the new residence. And, if you like it, you can buy it. For $700,000 you can be the first person to live in this house since Mrs. Miller died in 1933.

A Bit of Everything

According to the Wisconsin Architecture and History Inventory, the home’s “design is drawn from a combination of Queen Anne, Colonial Revival and bungalow influences. The assymetrical form is predominated by the use of steep sided gables.” Such mashups of architectural styles were not without precedent in Milwaukee, or even within Eschweiler’s oeuvre.

Take, for example, Eschweiler’s James K. Ilsley house, built next door to the north in 1895. It practically exhausted the inventory’s powers of description: “Highly eclectic in its design it borrows from so many periods (ie Tudor, Elizabethan, Chateau) that it is not easily discerned stylistically. This polyglot architectural form is common in Milwaukee.” Regrettably, the original building documents have been lost.

The roof of the Miller home drops precipitously from the attic to the first floor at the facade, providing shelter for the front door and room for a little cubbyhole porch upstairs, a popular Eschweiler feature. A bay window is smart and assertive, and rather minimally detailed. A tall window, arched at the top, illuminates a staircase. Curiously, a cement stoop beneath leads to no door. This is one of the few exterior alterations made over the years to the old mansion. There are three fireplaces within the building, along with five bedrooms, and plenty of other nooks and crannies for when you want to stretch out and take a nap.

The home has a kitchen like you’d find at work, which is no surprise since the place has been a commercial building for more then eight decades. It is equipped with four bathrooms, each featuring modern flushing water closets, and lavatories with hot and cold running water. This plumbing arrangement would seem ideal for a large family or a particularly incontinent small one. However, a potential purchasers are advised that unless they plan to bathe elsewhere , the home is not in move-in condition, as it has no remaining bath tubs or shower stalls. This place has been strictly business since Mrs. Miller moved from Astor Street to Forest Home Cemetery, where the family plot is decorated by a bronze angel sculpted by Daniel Chester French, of Lincoln Memorial fame.

Mrs. Miller died in 1933 at 89, having outlived her stepson Benjamin by five years. The home passed into the hands of her estate, which rented some back rooms to Mrs. C. A. (Leola) Michael in 1935. On November 23rd, 1936, Leola took out an apparently after-the-fact permit to “operate a reducing school and physical culture institution” on the premises, to occupy “375 sf. consisting of two rear rooms 2nd floor of building.”

The very next day, Smith of the building inspection department took a look around and issued an order to “properly seal waste opening where bath tub was removed.” Over the years, the remaining bath tubs were also removed from the home.

The building sold for $12,000 in 1945, when Leicester R. Moise purchased it and turned it into the Moise Bournique and Co. Sportsmen’s Store. On the first floor Les had a gun display, golf clubs, fishing tackle and rods. Upstairs was ski equipment and clothing. Shipping and receiving occupied the basement. The firm, by then run by Clement Rosmann, packed up its gear and moved to Whitefish Bay in 1955. Les Moise remains a Rosmann family business with Mequon and Brookfield locations.

The Doctor is In

After his store followed his customers to the wealthy North Shore, Rosmann faced a challenge: What to do with the old mansion? On May 28th, 1956 he took out a permit application for a “Rooming House — 16 roomers. Former occupancy sporting good store.” Was the Miller mansion doomed to this ignominious fate, as were so many others of the era?

A reprieve was in sight.

The title came with a catch: since the area was (and is) a zoned residential district, occupancy of the premises for business purposes requires a variance from the Board of Zoning Appeals. (This is likely why the home is being marketed as a single-family residence today.) No sooner had the doctor unloaded his light weight portable X-Ray and bookkeeping equipment than he was issued a notice from the city to  “discontinue use of 2nd floor as an office. No permit for conversion.” Gaenslen went to the board, and got his variance.

Whatever Happened to B. K. Miller, Jr.? 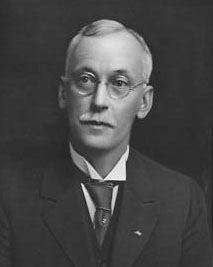 Benjamin Kurtz Miller Jr. Photo is in the Public Domain.

When we left Benjamin Kurtz Miller Jr. at the census of 1920, we find him unmarried, unemployed and a “lodger” in Milwaukee. His circumstances were not nearly as dire as this simple enumeration implies.

The “unmarried” part remains his business, although we have our suspicions.

As far as being unemployed, this, too, was his call. Miller retired from the practice of law in 1909 at the age of 48, saying he had all the money he needed. At that time he also resigned from the board of Northwestern Mutual Life Insurance Co. Even while employed at Miller, Noyes and Miller, his father’s law firm (now the 175-year old Foley & Lardner), and which he joined at age 21, young Miller took annual vacations. That is to say, he would take off for an entire year at a time, following his diverse interests, ranging from Big Game hunting to a comprehensive analysis of the Venezuelan economy. Then back to work for a year. Let’s see a Foley lawyer try to pull off that work schedule today!

As far as B.K. Jr.’s housing arrangements, after moving out from his stepmother’s roof while in his mid 50s, Miller found his “lodgings” in the Milwaukee Club, which remains on E. Wisconsin Ave. in its original 1880s home. He was familiar with the place, having served for years as an officer and board member of the club, assuming the duties of his late father, one of the club founders.

Visited Every Nation on Earth

Miller, a great traveler, who eventually visited every named country on earth, also held lodgings at the Cobden Club, London, the Devonshire Club, London, and the University Club, New York. It was there where he died on March 17th, 1928 at the age of 71, having previously donated his noted stamp collection to the New York Public Library. It was a gem of a collection.

A contemporary described its marvels: “his collection of postage stamps includ(es) numerous specimens that aroused the envy and provoked the despair of fellow enthusiasts in this country and abroad. Among its glories was a set of American issues from which not one item was missing.”

That is correct. The compulsive scholar Benjamin Kurtz Miller, Jr. assembled a collection of each and every U. S. stamp that had been printed to that date. It was the first such collection compiled. In 1921, he donated the lot to the New York Public Library, where it remains one of its glories.

The “Stamp of the Century” 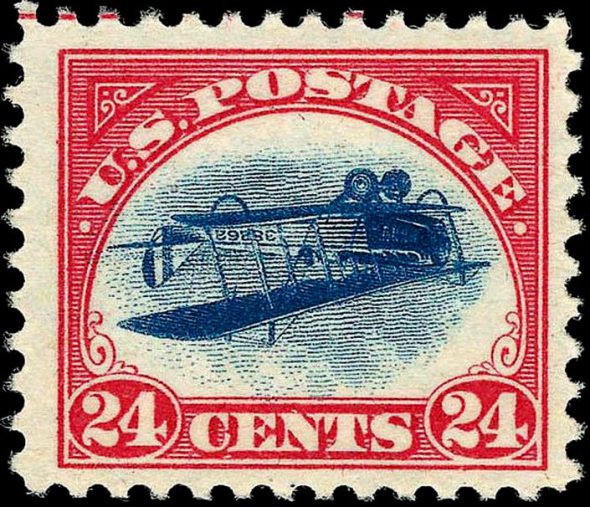 US Airmail stamp: Inverted Jenny Air Mail Issue of 1918, 24c. Photo is in the Public Domain.

The so-called “Stamp of the Century,” a.k.a. “The Most Famous Stamp in U.S. History,” the 24-cent “Inverted Jenny,” is 100 years old this year, and continues to live up to its reputation.

Within weeks of the discovery of the error stamp, featuring a upside-down airplane, Miller purchased position 18 for $250 and added it to his collection. In 1977 the Inverted Jenny Position 18 was stolen from the library, along with others of the priceless collection, now incomplete. It was recovered in the 1980s. One of the only 100 known Jennies sold for over $1 million in 2016. A book that year entitled the Stamp of the Century, outlines the story of the stamp and of the eccentric B. K. Miller, Jr. 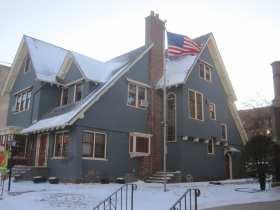 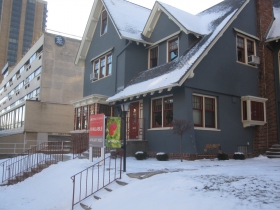 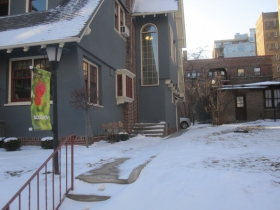 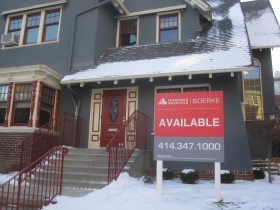 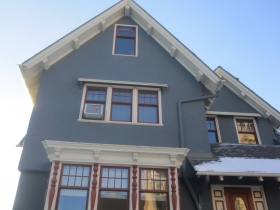 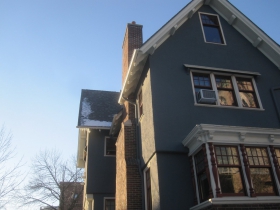 How Milwaukee Is It? The residence is about 0.7 mile northeast of Milwaukee City Hall.

5 thoughts on “House Confidential: Classic Eschweiler Home Back on Market”