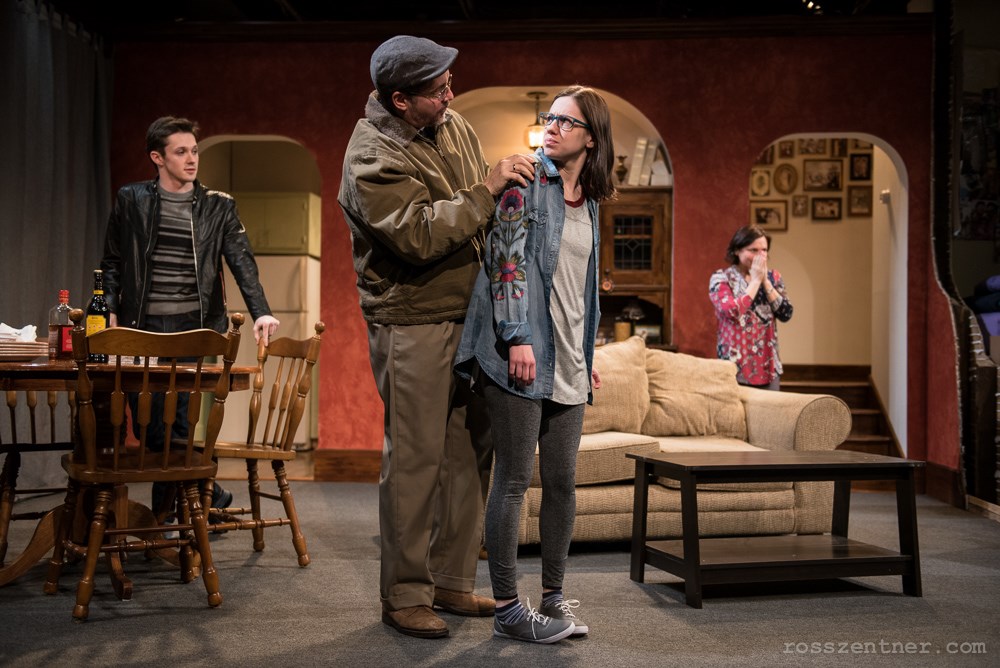 A great outing into drama — or is it comedy? Or mystery? Or searing family dissection? — awaits you in Russian Transport, presented by Renaissance Theaterworks through February 11 at the studio theater of the Broadway Theater Center.

Erika Sheffer, whose own background ranges from serious theater to improv comedy, has fashioned this uncategorizable probe into a settled immigrant family with two American bred children – and kin connections back to Russia where the older teen was born. The production, first performed in 2012 in New York, in some ways seems the basis for a series, so interested do we become in the key characters.

Don’t be fooled by the embraces and vodka shots when brawny uncle Boris (Mark Puchinsky) arrives from back home, eager for a place to stay. But be amused by the affectionate vulgar interplay among mother Diana (Elizabeth Ledo), gawky 14 year old Mira (April Paul) and cocky Alex (Max Pink), who has all the makings of a Yankee wheeler dealer, as his expensive casual wardrobe indicates.

That sense of family – of how the kids tolerate yet obey a bossy but funny mother – will evaporate as the underpinnings of the American dream meet the dangerous past (now present) from Russia.

While father Misha (Reese Madigan) mutters strange disapproval, Boris insinuates his handsome bulk and charisma into the adolescents’ lives and secrets, while mother Diana seems unusually slow to anger at his interference – almost as if Boris has a hold on something from the past beyond her affection for a one-time baby brother. It is a hint at how upbringing combined with immigration experience provides a different perspective on survival.

Jason Fassl, both lighting and set designer, has provided exceptional work — multiple acting areas within the home, carrying us up the hidden stairway to the second floor, over to the office and even inside a car that a series of Russian teenagers jump in and out of.

All these girls are played by April Paul. She is signaling her arrival as a first place presence in the Milwaukee acting scene. She’s not only truthfully humorous as the adenoidal brainy Mira, a child discovering the danger of flirting with Boris. With a simple rearrangement of her hair and voice, she effortlessly segues into vignettes of older-acting Russian girls her age that her brother has been hired to drive from the airport.

Sheffer dots the play with the Russian language only sometime fully translated into English, but we are never lost because in context, and with the surrounding English words, we grasp the meaning. The double language even adds to the sense that something is going on underneath and gives the actors a freedom of insight into the immigrant behavior.

Director Laura Gordon drives audience members to the undertones and the actors to fine interpretations. The blocking is intriguing, but her real impact is maintaining the believability of family interchanges, subtle warnings and memorable explosions. The parents are less explored than the kids, perhaps a deliberate choice by the playwright and the director to leave us hanging on every word and inflection. The parents combine affection with tension and we won’t fully know why until the payoff.

Madigan, usually a fine actor, plays the father Misha with his gentle manner and hidden worry. He has some difficulty with the Russian rhythm in the early going, but catches the seething fury and Chekhovian suffering of the second half.

As the virile but sinister Boris, Puchinsky is truly a menacing presence at his friendliest, dwarfing the others in size and threat. It’s good acting (and he’s also the Russian language coach for the cast), though there were more places he could have savored his character’s impact. He clearly senses and uses his power, and he clearly enjoys it.

As the mother Diana, Ledo is a hoot, a Russian ruler of the roost with sarcastic humor and dominant  expectations that are about to run into Boris. (This is a scene that needs some development.) The actress has a gift for comedy and a skill at listening and reacting with perfect timing.

As the teenage Alex, in over his head and yet defiant in his confusion, Pink is wonderfully direct in the car scenes, neatly taunting as Mira’s big brother but strangely uncertain in other moments, when we should truly feel his desire to shy away from what he’s getting involved in.

The revelation that Boris is up to something comes early, but just what will not be further disclosed here. This is a powerful piece well staged and well acted, transporting not just the Russians, but the audience. 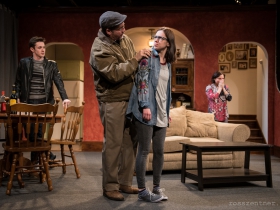 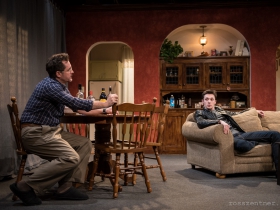 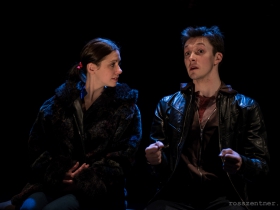 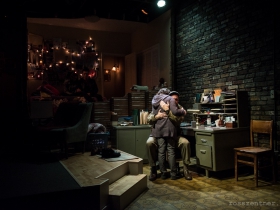 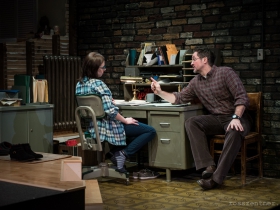 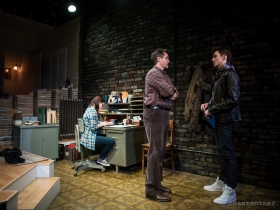