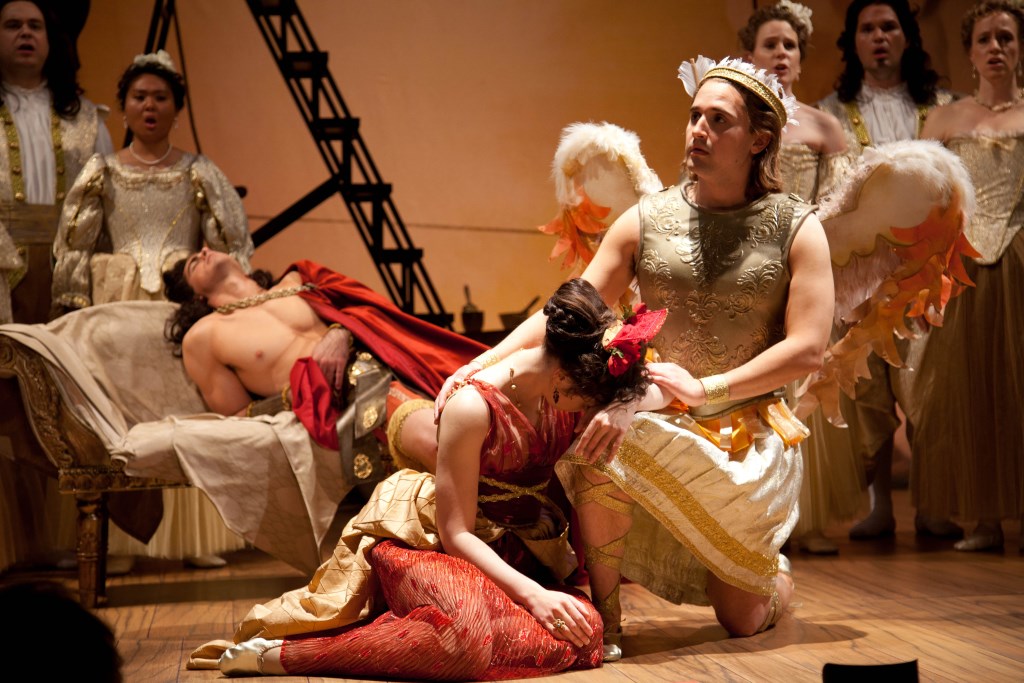 Amid the merry, “laughing, quaffing, and unthinking time” of Charles II of England, as poet John Dryden once described it, opera took the first steps toward the form we know today. John Blow’s Venus & Adonis (1684) and Henry Purcell’s Dido & Aeneas (c. 1684) offer a glimpse into that early, often misunderstood world. The Florentine Opera Company will stage both operas in an unusual double bill on January 26, 27, and 28.

“People should feel like they are being transported to the late seventeenth century and to the dawn of an art form,” says William Florescu, the Florentine’s General Director.

“This is music written by two of the great musical minds of their time,” musical director Jory Vinikour adds. An internationally recognized harpsichordist and conductor, Vinikour is noted for historically-informed performance practices. He will bring his considerable background to the Florentine productions, which use an orchestra formed of period instruments.

“The violins are made as they were at the time,” says Vinikour. “Gut strings, shorter necks, lighter bows. We can expect to hear more transparency and articulation. I’m playing a very beautiful harpsichord. We have a wonderful musician who will be playing theorbo, which is an archlute, a six foot tall lute. And he’ll also be playing the Baroque guitar, which was extremely popular in orchestras before and after this time. So we’re looking for something resembling musical authenticity,” says Vinikour.

Venus & Adonis and Dido & Aeneas are based on classical sources, which was common for opera, drama, and court masque in the seventeenth century. A performance would be addressed to the king and members of the court took part in the performances. The well-respected writer Aphra Behn, one of several female court poets, wrote the libretto for Venus & Adonis, and the score is subtitled “ A Masque for the Entertainment of the King.” Sets and costumes would have been ostentatious and ornate, with elaborate moving panels on the stage, specially designed architectural features such as perspective stages, dancing and singing, and what Purcell contemporary John Evelyn called “machines for flying in the air.” The Florentine production will include original sets by Noele Stollmack and costumes by Christianne Myers.

Today’s opera patrons will find the themes to be very current. Their emotional depth crosses the centuries.

“There’s a misconception that when you’re entering the world of Baroque music, you’re entering a world of artificiality. I think that’s the furthest thing from the truth. This music speaks to you at an emotional level,” Florescu comments. “Baroque music is lean and direct. It creates an immense amount of honesty from the performer in terms of what they’re expressing because it’s not protected by giant swathes of instrumentation under it.”

Both operas have similar plots of unfulfilled passion. Deriving from Ovid’s ninth century poetic narrative Metamorphoses, Blow’s opera tells the story of the goddess Venus’s love for the young mortal Adonis. When the youth is entreated by hunters to help capture an aggressive wild boar, Venus encourages him, singing “haste away.” She assures him that upon his return, she will “give him freely all delights with pleasant days and easy nights.” To her great sorrow, Adonis is killed, leading her to sing “Of tombs and urns and ev’ry mournful thing.”

“Blow presents the story with such emotional depth that you really feel present in this love story, Vinikour comments. “You don’t think that Venus is a goddess. She wishes that she could die with Adonis.”

Based on the ancient Roman poet Virgil’s Aeneid, Purcell’s opera tells of Dido, the Queen of Carthage (now modern day Tunisia), besotted with and forsaken by Aeneas, hero of the Trojan war. In the opera, his fickleness is cast as the result of the intervention of a sorceress. As he abandons Dido, she sings the famous aria “When I am laid in the Earth,” her dying farewell.

The singing requires coloratura performances for the females. In seventeenth century opera, “the vocalist has to blend with the instruments,” Vinikour notes. “She has to have the agility and flexibility to sing with the group and not transform Purcell into Puccini.”

Dido’s Lament, “”When I am laid in earth.”Anne Sofie von Otter with the English Concert.

Although it is one of the first English operas, Dido & Aeneas still contains elements of the court masque, particularly the antimasque in the form of a series of dances by those whom Shakespeare called “rude mechanicals”–a drunken sailor, a sorceress and witches. Choreographed by Dani Kuepper, Artistic Director of Danceworks, the dances will interpret the music rather than recreate dance styles of the time.

“In a few of the dances, it looks like Baroque dance, but other times it’s modern interpretations of Baroque music. It’s a little less pedantic. She captures the spirit of it,” says Florescu.

Traditionally, the witches represented political conspiracy, an internal enemy of the king plotting the downfall of the empire in a “deep-vaulted cell.” Their appearance is highlighted by thunder, lightning, and “horrid Musick.”

“The sorceress is a frightening character and the two witches are moments of comic relief,” says Vinikour.

Florescu adds: “The music written for the sorceress and the two witches is just bizarre. It gives the lie to the theory that Baroque music is sterile.”

An ongoing controversy among musicologists about the first performance of Dido & Aeneas places the date somewhere between 1683, when Purcell became court composer to Charles II, and 1689. Traditionally, it has been thought that the opera received a premier at Josias Priest’s girls’ school in London.

Florescu likes to think that both composers would be happy with the Florentine’s versions. “With two roles in Venus & Adonis taken by the bastard children of Charles II, Blow didn’t get to hear things done at a very high level. I would like to think the composers would be dazzled by modern performances,” Florescu says.

The Florentine Opera Company performances of John Blow’s Venus and Adonis and Henry Purcell’s Dido & Aeneas take place at the Wilson Theater at Vogel Hall, Marcus Center for the Performing Arts on Friday, January 26 at 7:30 p.m., Saturday, January 27 at 7:30 p.m., and  Sunday, January 28, 2018 at 2:30 p.m. Tickets and more information about the production are available at  www.florentineopera.org.