Jails more ordinance violators than all other county municipalities combined.

By Gretchen Schuldt, Wisconsin Justice Initiative - Jan 18th, 2018 02:29 pm
Get a daily rundown of the top stories on Urban Milwaukee

West Allis municipal ordinance violators last year spent a total of 21.5 inmate years in the House of Correction because they did not pay their fines.

That is more time than the 18.7 inmate years non-paying ordinance violators from all 18 other county municipalities served, according to preliminary House of Correction figures.

West Allis’ 2017 commitment total was up 3.1 years, from the 18.4 years ordinance violators in that city spent locked up in 2016, according to House data.

In contrast, Bayside, Hales Corners, Shorewood, Whitefish Bay, and West Milwaukee did not send anyone to the House for non-payment of forfeitures in 2017, according to the figures.

A total of 11 municipalities showed a drop in the number of days municipal offenders were locked up. St. Francis showed the biggest decline in days. It sent ordinance violators to the House for a total of 888  days in 2016 and 155 in 2017, a decline of 733 days, or two  inmate years.

House commitment days increased in Brown Deer, Cudahy, and Franklin, in addition to West Allis, according to the preliminary figures.

West Allis forfeitures for municipal violations are some of the highest in the county. A simple marijuana possession charge, for example, carried a $1,321 price tag.

State law requires municipalities to reduce the amount of an unpaid Municipal Court fine by at least $50 for each day a violator is jailed, and most (but not all) municipalities hold to the $50 amount. So an unpaid Wauwatosa marijuana citation that would result in a four- to six-day stay in the House would mean in a 26-day stay if the ticket was issued in West Allis. 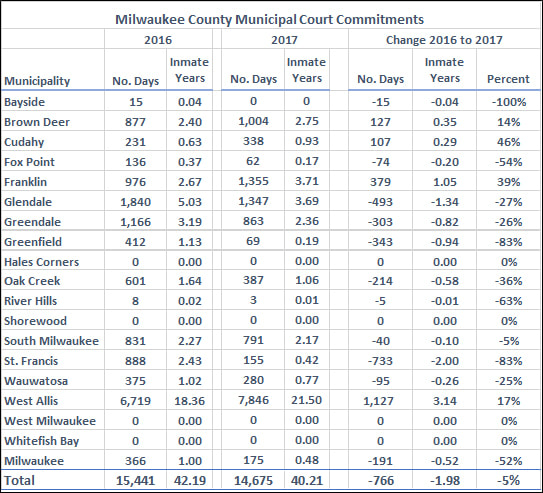