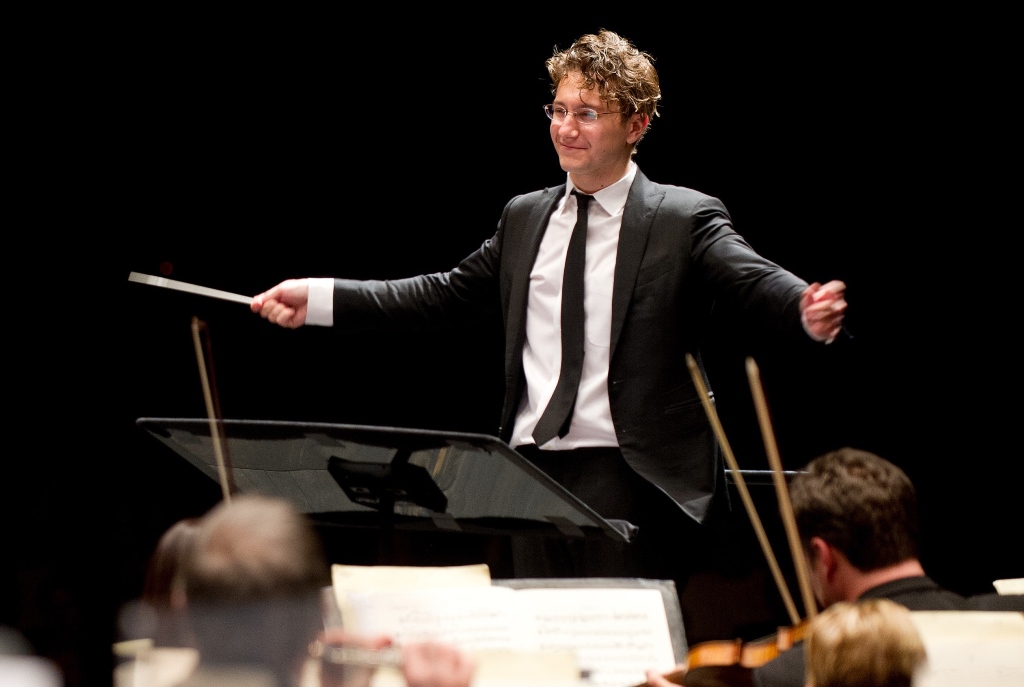 Teddy Abrams has a few things in common with Leonard Bernstein.

Like Bernstein, Abrams is a Jewish American who both conducts, composes and plays piano, and is considered something of a prodigy. Abrams is the youngest conducting student ever accepted to both the Curtis Institute (where Bernstein began studying conducting at age 21) and the Aspen Music Festival, and he also plays clarinet. All of which suggests he’s a highly appropriate choice to conduct the Milwaukee Symphony Orchestra’s upcoming concert of “American Classics,” including works by Bernstein, Perry, Barber and Copland, on January 20 and 21

Abrams is currently Music Director of the Louisville Orchestra, where he has done festivals of American music, and this concert explore work by four 20th century American composers and musical regions between the nostalgic and the optimistic.

Opening the concert is Leonard Bernstein’s hale and hearty “Divertimento,” composed for the 100th anniversary of the Boston Symphony Orchestra in 1980. The eight-movement selection of miniatures is based on the notes B for Boston and C for Centennial. At the premiere, Bernstein told the Boston Globe, “It reflects my youthful experiences here where I heard my first orchestral music.” The New York Times called it “raffish,” and the piece reflects Bernstein’s eclectic musical style and intellect.

The composition begins with a flourish for brass titled “Sennets and Tuckets.” The theatrical term refers to the entry to the stage of royal characters and messengers in Elizabethan era drama. From there, and in keeping with the centenary theme, Bernstein works each movement in a style popular during the twentieth century, from the Turkey Trot and the blues to the twelve-tone row. The second movement (Waltz) pays homage to Tchaikovsky, while the third (Mazurka) contains a quotation from Beethoven’s Symphony No. 5. At the first performance, members of the brass and flute section stood up for the solos during the final March.

YouTube: Listen to Leonard Bernstein conducting the Israel Philharmonic Orchestra in “Turkey Trot” from his “Divertimento.”

Following the Bernstein, the symphony introduces a composition by Julia Perry (1924-1979), “Short Piece for Orchestra” (1965). Perry was an African American composer strongly influenced by the atmospheric and macabre literary works of Oscar Wilde and Edgar Allan Poe. While “Short Piece for Orchestra” has no such literary allusions, her interest in haunting orchestration is evident. A series of contrasts in tempo, mood, and instrumentation, the one-movement piece opens with lean and agitated strings, punctuated by percussion and brass. The middle section is thoughtful, yet dissonant, featuring solos for violin and flute. Like Bernstein’s “Divertimento,” “Short Piece for Orchestra” highlights every section of the orchestra in briefly exposed passages.

Samuel Barber’s “Knoxville: Summer of 1915” is a programmatic work for soprano and orchestra based on a prose poem of the same name by American writer James Agee (1909-1955). The piece was commissioned by American soprano Eleanor Steber (1914-1990), who recorded the work in 1950.

Through the voice of a boy narrator, Agee’s short work recalls a peaceful summer night in Tennessee, at “that time of evening when people sit on their porches, rocking gently and talking gently and watching the street.” The languorous mood of the prose, evoking “voices gentle and meaningless like the voices of sleeping birds,” is emphasized by long sentences, rhythms in dactylic stresses of three and thickly detailed descriptions. The work is autobiographical. Agee’s father, who “coiled the hose” before lying on a quilt with his son to study the stars, would die in a car accident within the year.

Literary critic Taylor Benedict points out that “Agee’s poem is notable for its synaesthetic qualities” in lines invoking the “dry and exalted noise of the locusts” or “a streetcar raising its iron moan.” As Benedict writes, Agee uses sound “to transform the banality of everyday noises into music.” Barber encountered the prose poem in 1947, and responded to the language and the story, recalling that it “was vivid and moved me deeply, and my musical response that summer of 1947 was immediate and intense.”

The single movement work is scored for small orchestra and soprano. Versatile soloist Susanna Phillips will perform the solo role. Phillips is a frequent performer with the Metropolitan Opera and regularly appears as soloist with orchestras throughout the United States.

According to Barber, Aaron Copland wished he had set “Knoxville: Summer of 1915” to music. It is fitting, then, that the Milwaukee Symphony will pair the piece with Copland’s Symphony No. 3. Both works respond to the end of the Second World War. Whereas Barber’s piece looks backward to a time before the wars of the twentieth century, Copland’s symphony is triumphal, celebrating America’s victory over fascism and genocide. The piece is a contrast between lyrical and monumental. Writing in the New York Times in 1987, Robert Schwarz said that the symphony “captures the mood of a people, [that] speaks a shared language of hope, conviction, and affirmation.”

Copland’s progressivism is revealed in snatches of American folk tunes and open chords that paint in music the sensations of wide-open landscapes. The piece intentionally reiterates the “Fanfare for the Common Man” of 1941, placing it in the new context of the symphony. Copland acknowledged that he “was reaching for the grand gesture” and “the symphony’s mood and tone are certainly related to its time.”