Back when Jason Kidd was still the Milwaukee Bucks coach, we published this story on his home. Yesterday a news story reports that the Fox Point mansion, which Kidd purchased for $2.39 million in 2014, has been sold for $2.65 million to John Miller, the founder and principal of Arenberg Holdings, a Milwaukee venture capital fund, and his wife Brigid Miller. Here is a report on Kidd’s former home:

Jason Kidd was a ten-time NBA All Star during his playing career, and has first-time eligibility this year for the Naismith NBA Hall of Fame. The University of California-Berkeley, his college team, will release a bobblehead figure in his image on January 20th. (He’s already in their Hall of Fame). In November, Kidd’s wife Porschla (the former Mrs. Russell Simmons) gave birth to the couple’s third child. On top of all of this activity, Kidd has also served as the Head Coach of the Milwaukee Bucks since 2014. He still has a score of overnight trips ahead of him during the remainder of the regular season, so who can blame him for having a nice crib to come home to when it’s time to take a break.

In September, 2014, the Kidds were interviewed by Charles F. Gardner of the Milwaukee Journal Sentinel about their move from New York City to Cream City. Porschia Kidd had this to say about her new home:

“My neighbors baked us brownies,” she said. “That’s the first time that’s ever happened to me.

“They brought them over and said, ‘Welcome to the neighborhood and welcome to Milwaukee.’ It was really nice. Who does that, right?

“It was really nice and made us feel at home.”

A Forbidden Gate in the Public Way

Among the first improvements Kidd made to the new home was the construction of an electrically operated gate at the end of his driveway. It hangs from a pair of $8,000, seven-foot tall natural stone pillars, each 32 inches square. The two eight-foot-wide panels of the gate operate independently, and range from 63 inches high at the ends to 76 inches at the middle. Not even the finest basketball player can jump that high.

The Village of Fox Point building inspector made note of the improvement, which was constructed in the public way. (The Lake Drive right-of-way is 100 feet wide in these parts.) On December 4th, 2014 he sent a letter to Kidd, informing him that the gate was “illegally installed.”

The Village of Fox Point Building Board summoned the Kidds to the meeting of February 15th, 2015 where the owners hoped to legitimize the offending structure. This entailed an appeal for an after-the-fact special exception from section 745-7(B)(3) of the Fox Point Village Code, “the ordinance pertaining to fences, walls, architectural screening devices, driveway gates and arbors.”

Mr. and Mrs. Kidd made their way to the board to state their case. After they did so, the members ruled that it was their consensus that the application be tabled because:

Forced to the realization that municipal approvals in Fox Point are not slam-dunks, Kidd was obliged to rebound, appearing at the next meeting of the board, held on March 23rd, 2015. This time he was armed with experts, blueprints and extensive documentation as to the depth of his rebar.

Scott Miller, Building Inspector, Richard Dassow, Ideal Management, Daniel Bruckner, [a neighboring property owner] and Jason Kidd, were sworn in and provided testimony. Mr. [Don] Zien made a motion to grant the special exception … and find that there was a legitimate need, that it would not adversely affect the health, safety or welfare of the community, and that it would not impede the intent of the law. Mr. [Kurt] Ostoic seconded the motion. With all members voting aye, the motion carried.

With this introduction to North Shore building codes in his rearview mirror, Kidd also provided the village with landscape plans for his home, which is a matter of municipal concern in Fox Point, which is both a “Bird City Wisconsin” and a “Tree City U.S.A.,” as signs in the village remind us. Kidd made landscape improvements to his home, including planting liatris, boxwood coreopsis and coral bells to soften the area around the central front entry of the home. He also planted, very densely, a row of Techny Arborvitae along the street frontage, effectively closing off the property from the busy street to the west. In fact, Kidd seems to be one of those folks who is really crazy about homework: on a recent visit crews were up on a crane doing something to the exterior on a winter’s afternoon.

The Kidd residence, with its four bath tubs, three sump pumps, three sinks, two water heaters, two dishwashers, nine wash basins, eight water closets, three showers and one garbage disposal, took quite some time to assume its present state. For this, apparently, we can blame the Great Recession, which generally did not make itself felt (or at least visible) in a community with an annual median family income of $94,348. But this place was an exception, and a highly visible one at that, as this unfinished hulk of a building sat for years awaiting completion and its ultimate fate as the home of the growing Kidd family.

In May, 2006, Frank sold the home to Milwaukee Property Development, LLC. for $750,000. The firm, now defunct, was owned by Thomas R. O’Brien, who was poised to become among the victims (or possibly causes) of the nation’s most serious economic downturn post-Great Depression.

On December 4th, 2006, O’Brien took out a fateful permit to demolish most of the existing home for the purpose of constructing a new 4,500-square-foot, $600,000 home on the site. Some work was undertaken, but the progress ground to a halt. O’Brien sold the uncompleted shell to John Robert Moore and Amy Nicole Moore for $1,500,000 on February 23rd, 2011.

In August, 2011, the Moores took out a permit to have Sazama Builders “complete residence from initial builder … finishing work on original plans that have been submitted for new construction.” The cost to finish the project was estimated at $182,469. The house complete, the Moores eventually put it on the market, selling it to the current owners for $2,392,000.

Today the home reposes quietly on its 1-1/2 acre lakefront lot, hidden behind the Techny Aborvitae that obscure all but its roof from the street. The mailbox alongside the road is a rather pitiful affair of unpainted wood and rather small format. (Thank goodness Kidd doesn’t receive his salary in $100 bills, since the box would not be large enough to handle his monthly pay.) The house address is tacked to the pole with metal letters. A red reflector is the only thing standing between it and an errant snowplow. It’s really not until east of Lake Drive that Fox Point shows any taste in personalized mailboxes, if any further proof was needed that this is not River Hills. A fire hydrant sits directly beside the mailbox, which should be heartening news to Kidd’s insurer.

The central entry to the home features a well-detailed porch and an inviting entrance that, unlike a McMansion, limits itself to one floor, providing a human scale to the large home that lies beyond. The lower level of the home is a stone veneer, matching quite nicely the pillars of the now-legal gates out front. The neighborhood has its enticements. with fabulous Beach Drive just to the north, and a couple of hundred feet below. Recreation can be found blocks away at the Fox Point Municipal Pool (from June to August only) or at the Town Club (for members only). The Fox Point Beach Club is also a members-only entertainment option that few have ever heard of or could even locate. For more democratic outings, the Kidds can pack their picnic baskets and head to Doctors’ Park, at the northeast corner of the village, adjacent to the Schlitz Audubon Nature Center. 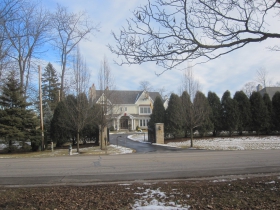 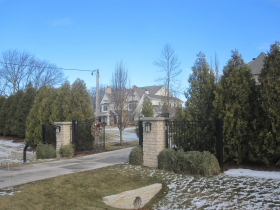 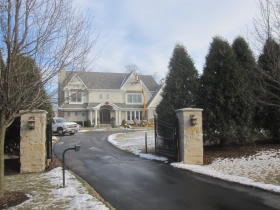 How Milwaukee Is It? The residence is about 8.0 miles north-northeast of Milwaukee City Hall.