But proposal has been narrowed, will only affect city-financed projects. 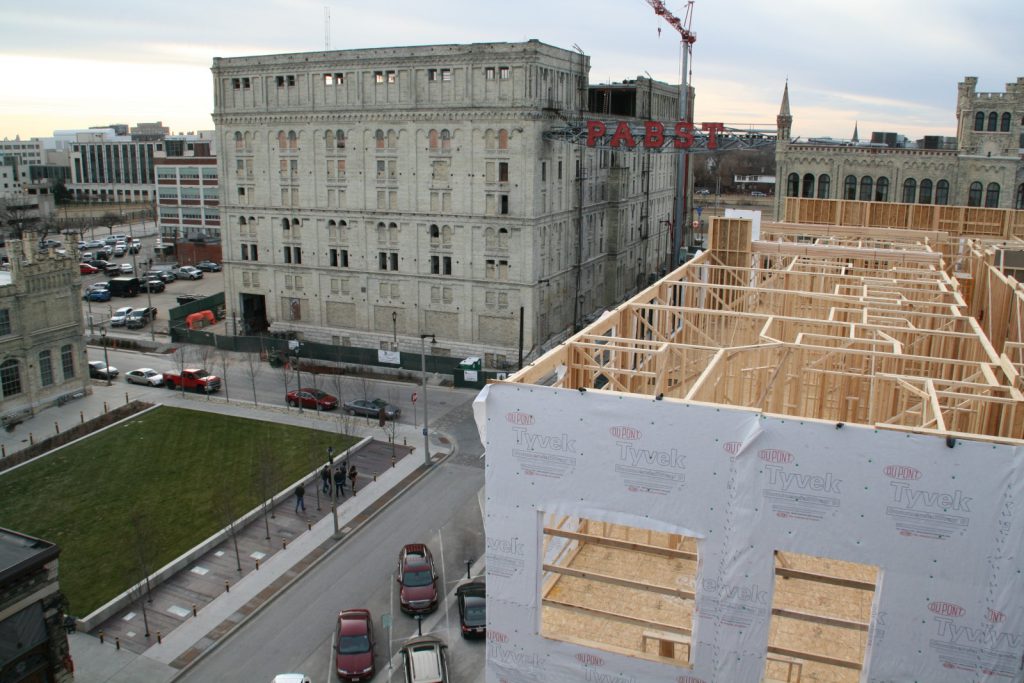 Apartment construction at The Brewery. Photo by Jeramey Jannene.

A proposal that requires affordable housing to be included in large developments is moving forward, albeit slowly. Alderman Robert Bauman, the legislation’s author, has revised the plan to only require affordable housing in city-financed apartment buildings. An earlier version of the plan impacted both public and privately financed projects.

Bauman agreed, believe it or not, with the City Attorney office’s opinion that his earlier proposal would run afoul of a state statue and a Wisconsin Supreme Court decision. The alderman, as promised in an interview, revised his plan to comply with the guidelines laid out by the city attorney.

The legislation had its first hearing before the Common Council’s Zoning, Neighborhoods & Development Committee on Tuesday morning. Bauman said his proposal would now only affect projects that receive $1 million in city funds and also has provisions for specific projects to be exempted.

The proposal would require developers building city-financed apartment buildings with 20 or more units to set aside 20 percent of all new units for residents making less than 60 percent of the county’s median income for a period of 30 years.

Committee chair Jim Bohl is skeptical of the proposal, despite being listed as a sponsor. Bohl raised the specter that developers would just require bigger financial assistance from the city to make up for lost revenue from rents. Bauman responded “I don’t see that as a problem.” Bohl then went on to raise a bigger and harder-to-measure issue, that some developers might bypass Milwaukee entirely. “You know how much 20 percent of no project is?” Bohl warned. “Twenty percent of zero is zero.”

Commissioner of the Department of City Development Rocky Marcoux then weighed in, asking the committee for more time to review the proposal. “I didn’t rise here to oppose the legislation. I am here because the Department of City Development did not draft this piece of legislation. I did review it and I think there are a number of comments that I have.” Marcoux told the committee he sees the legislation as a significant tool in avoiding displacement of existing residents.

Turning towards Bauman, Marcoux said “believe it or not, we could be of similar mind on this.”

He suggested the proposal was ambiguous as to neighborhood-sized tax-incremental financing districts. Giving examples of the Beerline B and The Brewery areas, Marcoux said the proposed ordinance needs to resolve if all developments in those areas are subject to the requirement because the city financed the underlying infrastructure. Bauman responded that his intention was that they would not.

Marcoux noted that holding the measure for more review would also give clarity on the impact of the federal tax bill. A final version of that bill, unifying the House and Senate versions, is expected by the end of January. Beyond the potential elimination of a number of tax credit programs, the legislation devalues surviving tax credits by as much as 20 percent by reducing the corporate tax rate.

The commissioner also raised the issue of monitoring compliance. He told the committee that the Internal Revenue Service currently monitors low-income housing tax credit compliance, but the city would need to find an outside auditor or be prepared to do the work themselves to monitor compliance for this class of projects.

Marcoux also said he wants to ensure the buyout amount ($125,000 per unit to avoid the low income housing requirement) is set at the right price so developers are more likely to participate in the program rather than simply paying to opt out.

The committee supported Marcoux’s request for more time to study the measure, holding the measure to the call of the chair. The legislation is now scheduled to return alongside an anti-displacement plan Marcoux’s department is required to submit by March 1st.

This proposal would cover part or all of the neighborhoods of East Town, Westown, the Lower East Side, The Brewery, Historic Third Ward and Walker’s Point. The ordinance defines the boundaries of the proposal as “beginning at the intersection of Interstate 43 and West McKinley Avenue, West McKinley Avenue, the Milwaukee River, East North Avenue and East North Avenue extended, Lake Michigan, the Milwaukee River, the Kinnickinnic River, East and West Greenfield Avenue, and Interstate 43 to the point of beginning.”