My visit to Sacramento and Kings arena may show us the future. 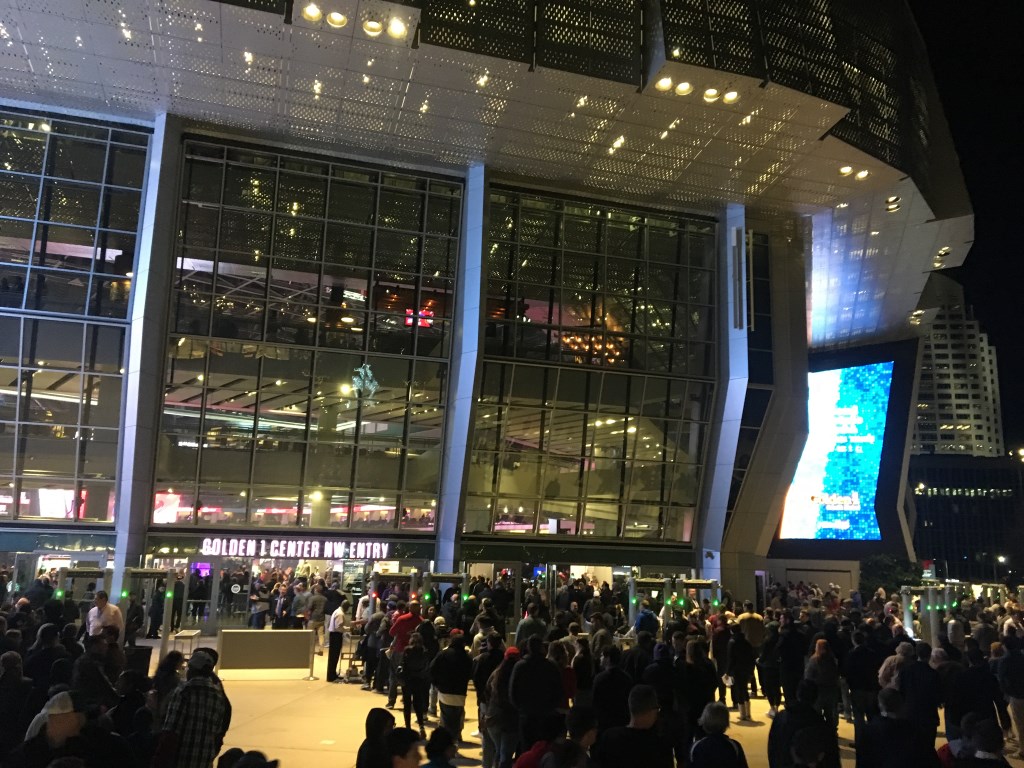 Sauced BBQ & Spirits was packed. I’d grabbed a table at the barbecue restaurant and bar one table over from Jason Wallis, who was pre-gaming it with some female friends before the Bucks played the Sacramento Kings that night. I asked Jason: Is this place new?

“Yeah, it’s new. This whole area blew up after the arena was built.”

Sauced is the social hub of DoCo, or Downtown Commons, the plaza immediately to the east of Golden 1 Center, the Kings’ brand new home. Jason grew up south of Chicago but now lives in Davis, 15 miles west of Sacramento. He drove to downtown Sacramento for the Kings game and has already come to the new arena for a few concerts.

Golden 1 Center just started its second year and is the second-newest arena in the NBA. The Detroit Pistons’ Little Caesars Arena opened this year, and next year the Milwaukee Bucks will take over with the league’s newest, shiniest arena, ready to “revitalize downtown” or so the Bucks have promised. Sacramento today is a sneak peak of Milwaukee next year. 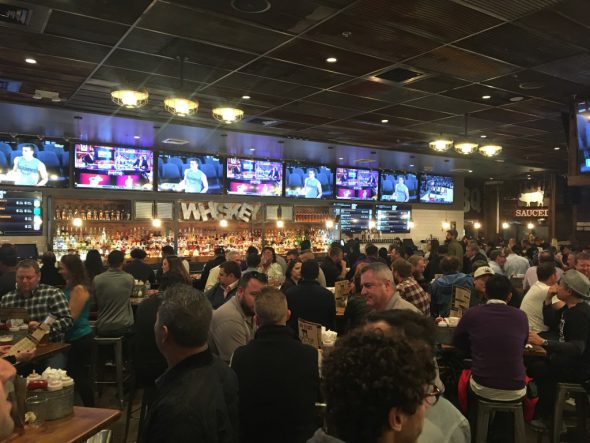 Sacramento and Milwaukee are similar sized cities, similar sized metro areas, both with a history of purple uniforms and solitary championship banners hanging from the rafters. Oscar and Lew brought the Bucks our only world championship in 1971, which nobody can ever take away from us. But you can lose your team, as the Rochester Kings’ 1951 World Champions banner, four cities ago for the franchise and their only title, reminds us.

Sacramento came much closer to losing their team than Milwaukee, but both faced pressure from the NBA to replace arenas that opened in 1988 and both complied with public subsidies. All the numbers look very similar. Both arenas have price tags of $500 million plus and in both cases the public contributed about half of the cost. Golden 1 Center has 17,608 seats, 108 more than Milwaukee will have, and both have 34 luxury suites.

The Sacramento arena has all the bells and whistles. Players look bigger on the jumbotron, which is just ten feet shorter than the court itself and the biggest in the NBA, than they do on the court. From the main entrance, like Brooklyn’s Barclays Center, the five-year-old home of the Nets, the atrium opens up into the arena and out above the court. Also similar to Barclays, the court floor is lower than street level, making the bowl feel more dramatic as fans walk in and down into the lower bowl. Both teams use extra stage lighting to show off the court.

On the outside large silver metallic plates make the arena look like a more militaristic Frank Gehry museum. As fans walk through the concourse, the crumpled articulation of the square exterior follows into the interior. The Lake Michigan-inspired wave design of the Milwaukee arena will be gracious in comparison.

Downtown: The Lights Are Much Brighter There 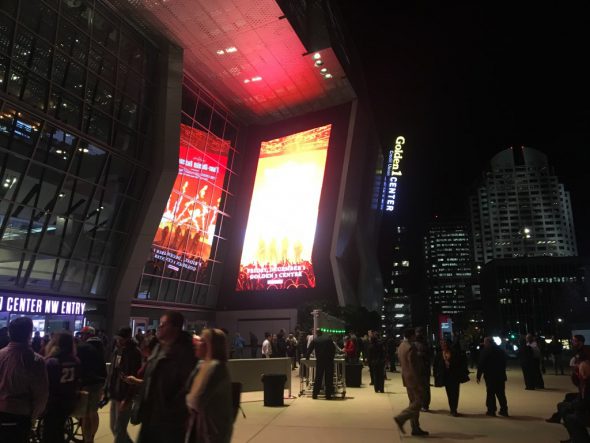 The main entrance of Golden 1 Center with downtown Sacramento in the background. Photo by Frank Martinez.

While both the Sacramento and Milwaukee arenas are downtown, this was a change for Sacramento, which replaced its Sleep Train Arena (most commonly still known as ARCO Arena), which was six miles from downtown. Its new Golden 1 Center replaced a fading downtown mall and totally changed the character of this part of Sacramento.

Sean and Alan Liou live by the old arena. These brothers, both in their 30s, moved to Sacramento from Taiwan in the early ‘90s and have been Kings fans ever since and dedicated season ticket holders for 15 years. Now they have a longer game day drive but they are happy with their new digs. They say the team laid the new arena’s seat plan over the ARCO seat layout, so season ticket holders could keep their seat location. They also could literally keep their seats; at their home Sean and Alan now have the physical seats they sat in at ARCO.

Sean loves how high tech the arena is, fast reliable wifi, and added, “we can order food from the phone app and get it faster than if we wait in line.” Their ticket prices hardly went up at all, though they say this was because the team isn’t very good. Sean and Alan’s only complaint was that the older arena was louder.

Outside the Arena: Sacramento’s DoCo and Milwaukee’s Live Block

The new Bucks arena will be state-of-the-art, as new arenas always are. Yet we all know the true success of a new arena depends less on architecture then on Jabari’s knees and whether Giannis can take yet another leap. But outside the arena, both projects hope to amplify the new arena impact by constructing an entire entertainment district. 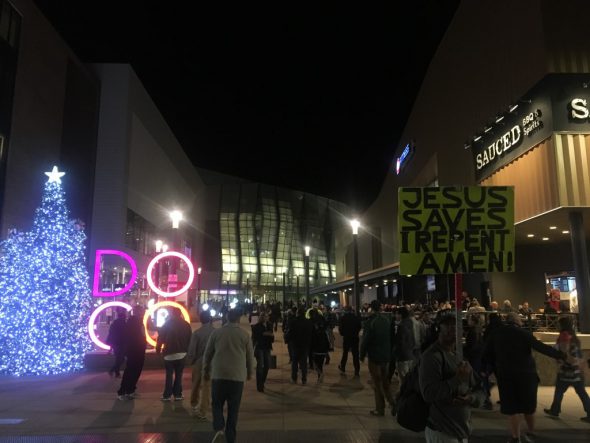 Fans walk through DoCo plaza to the arena. Photo by Frank Martinez.

The Bucks recently began construction on Live Block, a pedestrian friendly mall on 4th Street between Highland and Juneau that they hope will transform the neighborhood. There will be a beer garden and the walkway will connect the arena’s main entrance to the nightlife of Old World Third Street.

If Sacramento’s DoCo plaza is a preview of Live Block, Bucks fans and all Milwaukeeans will like what they see. Well before the game, DoCo plaza was alive with commercial activity and people walking every which way. Architect renderings often include people walking across plazas that in real life end up empty, but DoCo looked like an architect rendering’s best-case scenario.

The key to any urban development is effective integration of retail, entertainment, bars, restaurants, and residential options — in other words, people need more than one reason to show up. Long gone are the days when cities would just plop down a giant granite block and hope for the best. Next to the Sacramento arena the new Sawyer Hotel opened last month. Patrons filled almost every seat at the spacious and sleek Starbucks Reserve. There is a new Haagen Dazs. But as you walk toward Golden 1 Center’s main entrance, the most common sight is buildings under construction and “Coming Soon” signs, both for new stores and condos. This is an ongoing, slow going civic project.

Bob Simpson is one of the owners of Malt & Mash, an Irish pub, and El Rey on K, a high end cantina, two new establishments that are across the street from Sauced and about 50 yards further east from the arena. He has owned and operated venues in Sacramento for almost three decades. Malt & Mash was busy before the game, and he said “it has become a hub for industry workers to gather after shifts” even when there is no game. 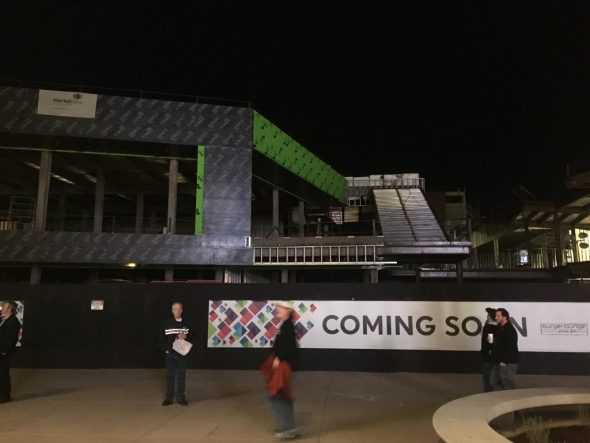 El Rey “does huge volume” on game and concert nights but “spring and summer were tough and it was almost like operating a seasonal business,” he said. Bob believes the area needs more residential development so that people are in the area every day, not just when the Kings are in town. But he is patient and pleased with the results so far. He gives “the entire project a solid A.”

But walk all the way around the arena, and on most of the west and south sides there isn’t much going on. Bob says, “the development across the street with housing and additional retail is over 16 months behind schedule and still not near completion.” There is still a ways to go. 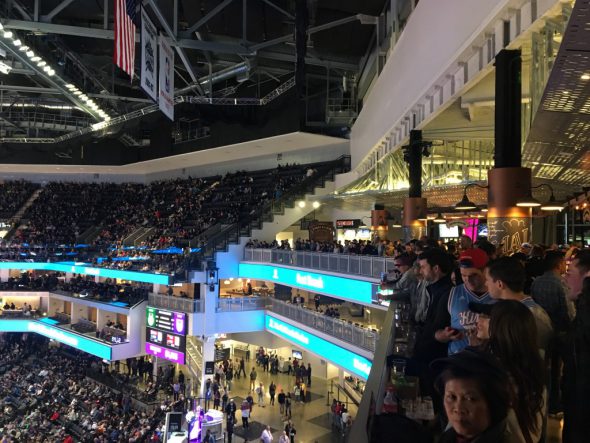 Fans hang out and watch the game from the top level Draught House. Photo by Frank Martinez.

High high above the action on the court is the Sierra Nevada Draught House, a gem of the Golden 1 Center, similar to the Panorama Club underway in Milwaukee. The Draught House turns part of the arena farthest from the players into an attraction. Fans in their 20s and 30s socialized like at any downtown hot spot and some leaned right up against a railing that looks out over the entire arena. Sierra Nevada, located 90 miles north in Chico, sponsors the Draught House and keeps their beer flowing.

New arenas bring better food, and in Sacramento that means high end and local, with 90 percent of ingredients sourced within 150 miles of the arena. One food kiosk offered duck fat fries and andouille, whatever that is. The nachos included two types of chips and a four cheese mix from the Petaluma Creamery; I would have preferred the standard stadium yellow. The bratwursts and sausages on the grill looked good, although the attendant couldn’t tell me where the sausages were from. I don’t see that happening in Milwaukee.

Like that new-car smell, new arenas just feel good. It may be irrational how we discard monstrously expensive stadiums and arenas after just a few decades, but it seemed like all the Kings fans in the Golden 1 Center had a smile on their face. 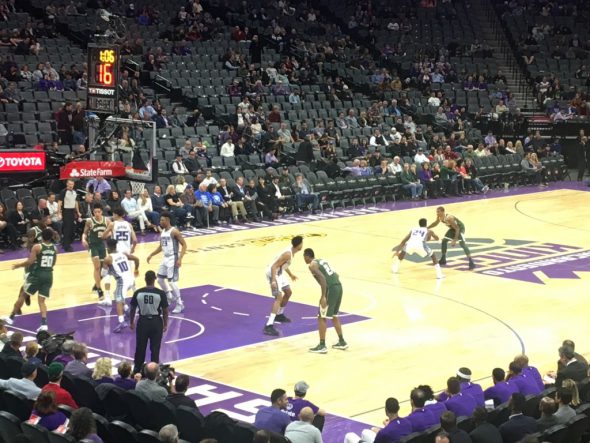 Bucks blowout, most of the fans have left with a minute left in the game. Photo by Frank Martinez.

Sacramento’s lesson for Milwaukee is that, while we will like our brand new toy and the outdoor downtown plaza we are building for ourselves, it takes time. We should not expect the opening of the Bucks arena to be like flipping a switch. Just as construction is going on now, it will continue in the years to come with more housing, office space, retail, and bars and restaurants.

Milwaukee will probably not see as dramatic of a transformation as Sacramento, because our arena is already downtown. But with integrated mixed-use development, aggressive programming of Live Block, continued investment from the team and private developers, hopefully new tenants will be lured and patrons will show up. We should be patient, but also have big expectations from the Bucks.

It was an easy 112-87 win for Milwaukee. On the court, the Bucks were up on the Kings by 24 at halftime. Eric Bledsoe drove down the middle at will. And after Milwaukee’s 40-year-old Jason Terry drilled a three toward the end of the third quarter, he did his open-armed jet plane zoom to the loud boos from the Sacramento fans. They are still mad at him for never playing a game for the Kings when they traded for him a few years ago.

But during a fourth quarter timeout, I looked up at the jumbotron and saw Jason Wallis from earlier at Sauced dancing with his friends. They were having a great time. 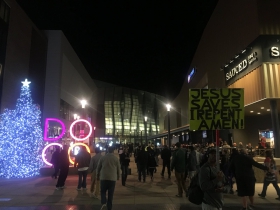 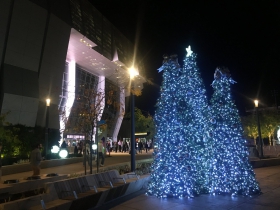 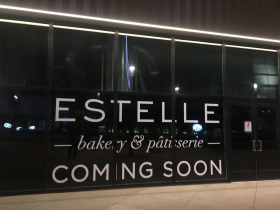 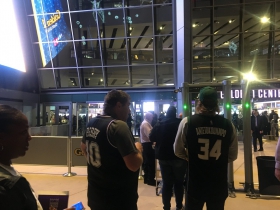 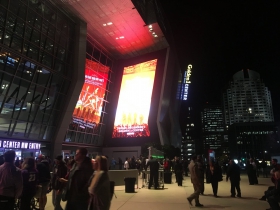 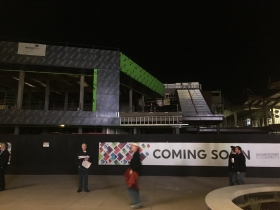 6 thoughts on “Kings Arena a Preview of New Bucks Home?”