Home for the Holidays in Riverwest

By Marguerite Helmers - Dec 7th, 2017 02:40 pm
Get a daily rundown of the top stories on Urban Milwaukee 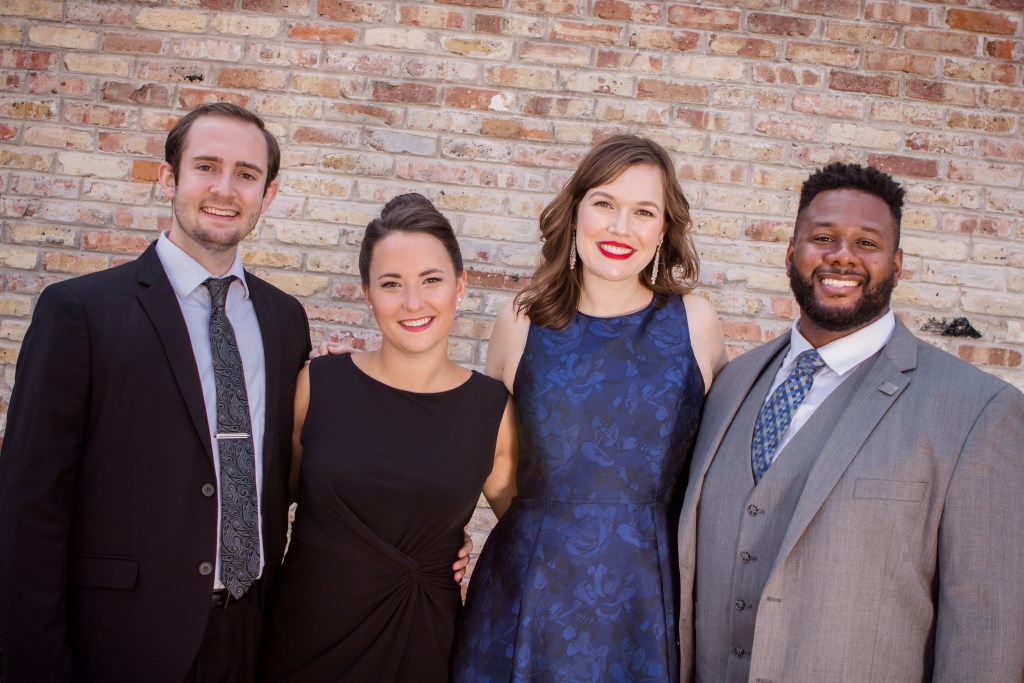 “Home for the Holidays.” Photo courtesy of the Florentine Opera Company.

Years and years ago, in the bleak midwinter days before the television and the internet, people gathered together to sing at the holidays. “Always on Christmas night there was music,” wrote Dylan Thomas in A Child’s Christmas in Wales. “An uncle played the fiddle, a cousin sang ‘Cherry Ripe,’ and another uncle sang ‘Drake’s Drum.’”

The tradition of gathering for carols and popular seasonal songs lives on in the Florentine Opera Baumgartner Studio Artists chamber concert Home for the Holidays, December 8, 9, 16 and 17 at the Wayne and Kristine Lueders Florentine Opera Center in Riverwest. Audiences will be treated to traditional songs and contemporary favorites by four up-and-coming opera stars of the future and tickets for the concert are going fast.

The quartet of singers are the 2017-2018 Donald and Donna Baumgartner Studio Artists, participants in a full-season professional training program under the auspices of the Florentine Opera Company.

Rachel Blaustein, soprano, holds a Master of Music from the Peabody Institute of The Johns Hopkins University. She has a lengthy list of performances and covered roles to her credit, including roles in Santa Barbara, Fort Worth, and Des Moines. In her second season with the Florentine’s studio artist program, Ashley Puenner is a mezzo-soprano who recently earned a Master of Music from the University of Kansas. Edward Graves, tenor, has studied at the Indiana University Jacobs School of Music, where he received his Master of Music degree. Baritone Nathaniel Hill has performed at the Aspen Music Festival, and been with the companies of the Madison Opera, and Cedar Rapids Opera Theatre. He holds a Masters of Music degree from Northwestern University.

Funded with a $1.5 million gift from Donald and Donna Baumgartner, the Studio Artist Program sponsors four early career singers over two years. Chosen from nationwide auditions where candidates number into the hundreds, these young artists headline concerts that are part of the @ The Center Series, visit schools as part of the Opera in the Schools program, and perform supporting roles for main stage Florentine Opera productions. Baumgartner Studio Artists are provided with a house adjacent to the Riverwest Opera Center campus, a unique situation for the largely itinerant population of young performers who often have to find housing and manage their own transportation in each new city.

Florescu notes that, “The at the center series has made such an impact in reaching new audiences in our community, particularly the Riverwest neighborhood.  Additionally, it provides wonderful, consistent performance opportunities for our Baumgartner Studio Artists.”