By Elizabeth Baker, Milwaukee Neighborhood News Service - Nov 29th, 2017 10:25 am
Get a daily rundown of the top stories on Urban Milwaukee 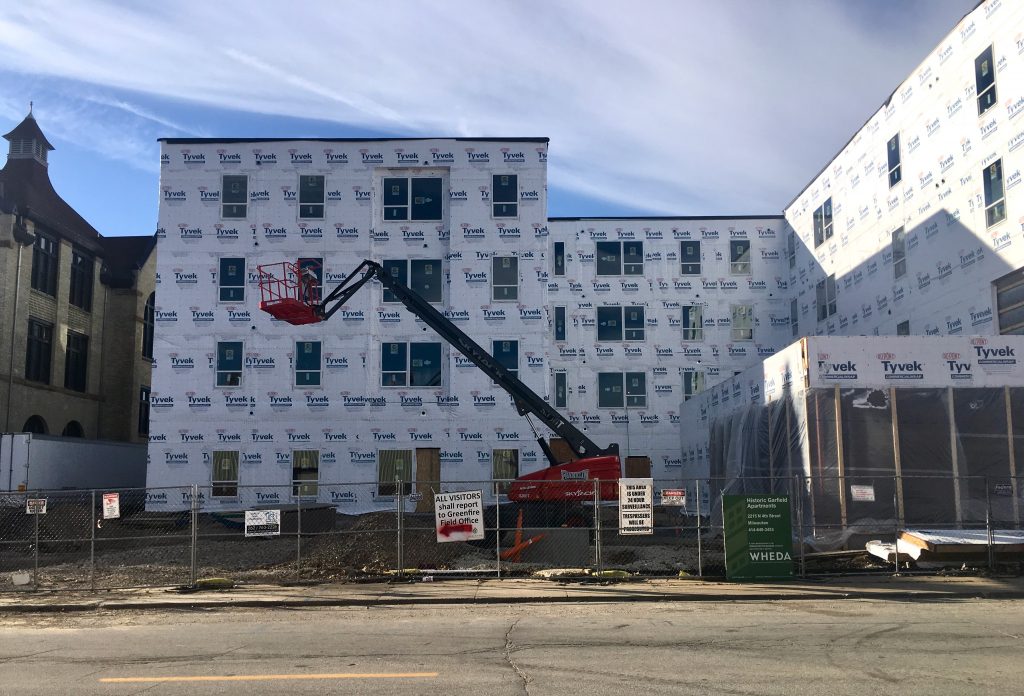 The Milwaukee Common Council Housing Trust Fund is helping fund affordable units in The Griot apartments, currently being built on North Avenue and 4th Street, just next to the Historic Garfield Apartments. Photo by Elizabeth Baker.

Danita Graham is a 30-year old mother living in Milwaukee. Despite having a master’s degree in social work, serving as a PEARLS for Teen Girls program coordinator and sitting on a development board in the Harambee neighborhood, she feels like she’s drowning as she struggles to obtain affordable housing.

“I’m in all of these systems, but yet, even in understanding real estate and development … I cannot afford a low-income property, even at the lowest level,” Graham said. “Even for an educated woman who’s communicated and worked in all these places, it’s not feasible.”

Graham voiced these concerns at a recent panel discussion, MKE Housing: Crisis & Opportunities, hosted by Global Shapers Milwaukee, a group of young adults committed to action and dialogue in the community, and ACTS Housing. About 35 people attended, including representatives from neighborhood groups, community organizations, corporations, and banks, as well as concerned residents. 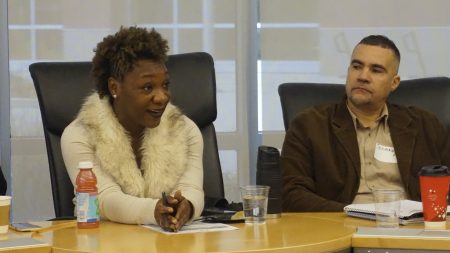 Rebecca Stoner, a Global Shaper and ACTS director of development, said the book “Evicted,” by Harvard professor Matt Desmond about the housing crisis in Milwaukee, and the 50-year anniversary of the fair housing marches this year inspired conversations about these issues among the Global Shapers and throughout the city.

Global Shapers and ACTS sought to bring together people on the front lines of the city’s housing crisis to highlight the good work being done in Milwaukee, identify gaps where additional strategy and investment are needed and raise awareness for others to get involved in solutions.

Gosman cited statistics that set Milwaukee apart when it comes to affordable housing. One-fifth of people in the United States spend more than half their income on housing, compared to one-third of Milwaukeeans. One of every eight Milwaukee renters moves because of evictions. Decades of segregation have increased disparities, and the metro area has the lowest black suburbanization rate in the country.

The panelists agreed: It’s a challenge too big for any one entity to overcome, but too often in Milwaukee organizations struggle to take a step back and make adjustments when something isn’t working.

Graham reiterated these frustrations. “How can we work together better to really make a difference, to bring that humanness to it?” she asked.

Awareness is key, said Schneider-Peragine. Her work with the Inclusive Communities Program supports neighborhood integration so that people of color and low-income families can have access to better employment and education.

“It’s like the water we swim in is segregation, and there are things that we don’t even question — when you go to a restaurant and you don’t see another person of color, or you go trick or treating and you know immediately who’s not from your neighborhood.”

City officials recognize this reality and are working to maintain affordable units as new development booms throughout downtown and nearby neighborhoods, Schneider-Peragine said. She cited a newly proposed ordinance in the city Zoning, Neighborhoods and Development Committee that would require all new privately financed apartment developments of 20 units or more to include 10 percent affordable units.

In addition, the city is talking directly with residents and local business and community leaders to make sure new developments, particularly expansion of the streetcar in Bronzeville and Walker’s Point, won’t push residents out of their neighborhoods.

Awareness and understanding about the variety of resources available to those seeking affordable housing options is also lacking, Stoner said. She cited a recent Milwaukee Journal Sentinel investigation, which noted that in July 2015 — the last time the Milwaukee Housing Authority’s waiting list for housing assistance opened up — about 35,000 people registered. From that list, only 3,000 were selected through a lottery system to join a waiting list, and as of August, more than 1,000 of those were still waiting.

Gosman said he disagrees with Desmond, the author of “Evicted,” who believes housing vouchers are the answer for Milwaukee. “The housing voucher system is broken,” Gosman said. “Anything that’s meant to be a safety net shouldn’t be rationed.”

Rental assistance isn’t the only resource available, Stoner said, “and if more people knew that, then we would be able to more clearly see the gaps of people who we’re not getting to with the current resources available.” For example, ACTS helps low-income people own homes.

York said that ACTS Housing’s one-stop shop model assists people in financing a home and helps them work through the buying and renovation process with real estate agents, contractors and repairmen. Providing these resources under one roof eliminates barriers to home ownership, York said.

The panel discussion left both Stoner and Graham with mixed feelings.

Resources exist, but Stoner acknowledged that navigating them is incredibly challenging. She said that housing organizations “are not talking to each other, and there is a lot of red tape and documentation collection that makes it cumbersome to figure it all out.”

However, she was excited to see so many people passionate about fixing these problems.

Graham agreed. She said she often sees the same people discussing the same issues at events like this. At this panel, though, she said she was happy to see several new people.

“It was good to be here today to see different faces of people who are looking for answers and educating themselves — to know that they are interested in changing the dynamic.”