Measuring How Polarized We Are

That’s what Craig Gilbert is doing, as he discusses with Mike Gousha. 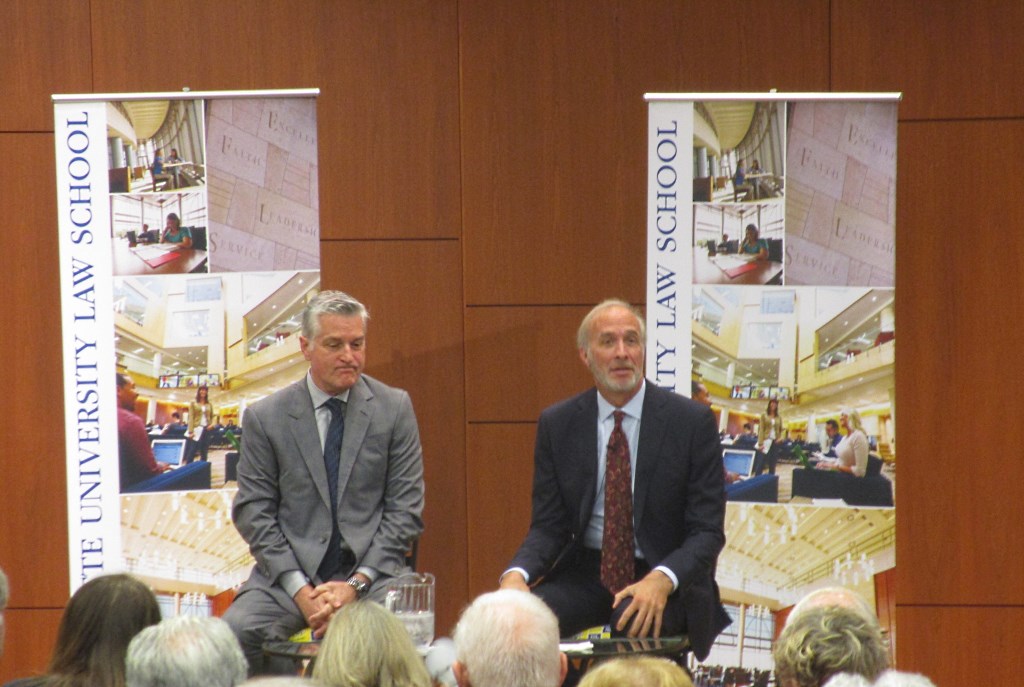 It’s no secret that Wisconsin has long been known as a swing or purple state, mixing both of the two major political parties’ symbolic colors while somehow choosing Democratic presidential candidates for two decades.

So the surprise outcome of last fall’s presidential election, where the state chose Republican Donald Trump, has drawn great interest in Wisconsin as to what factors might play into voter behavior in specific pockets of the state.

Particularly from Craig Gilbert, the Milwaukee Journal Sentinel’s Washington bureau chief, who discussed last fall’s polarizing outcome — and its aftermath — as a guest at journalist Mike Gousha’s On the Issues lecture series at Marquette University.

Gilbert is in the midst of a multi-part reporting project on the state’s political climate. His series is being supported by Marquette Law School’s Lubar Center for Public Policy Research and Civic Education. Gousha also is associated with the law school, serving as its distinguished fellow in law and public policy.

During the Nov. 14 sit-down with Gousha, Gilbert touched on the anti-political party flavor that is peppered throughout corners of the state — particularly in the southwestern portion.

Voters in a seven-county region favored former President Barack Obama by a whopping 18 points in the 2012 election; a year ago, now-President Trump took the region with a 3-point lead.

“You go, cycle after cycle, and the swings are getting bigger,” said Gilbert, who stopped by a number of local establishments in the communities he visited to get a pulse of the region.

One of the most dramatic examples Gilbert touched on occurred in Steuben, a tiny village in Crawford County with 131 residents, where eligible voters voted 38 points in favor of Obama in 2012 and 35 points in favor of Trump a year ago.

Attempting to get an understanding of the wide-swinging pendulum of votes has been at the heart of the current project, Gilbert said.

While major urban centers such as Milwaukee and Madison grab a large portion of the state’s overall vote count, Gilbert said a growing amount of attention is turning toward the rural counties.

Milwaukee and Dane counties, of course, have long had a blue tint. But Milwaukee County’s outlying suburban counties have gone a completely different shade of red.

“But the rural vote is the swing vote,” Gilbert said. “This is where people tend to vote for a person, rather than a party.”

Gilbert also delved into the growing polarization of politics. Wisconsin, in some respects, might have been a forerunner in that growing cultural shift when Gov. Scott Walker enacted his Act 10 legislation and stripped most public unions of bargaining rights in 2011.

Walker’s controversial decision had supporters singing his praises and detractors holding clipboards and calling for a recall.

“Obviously, Wisconsin has seen some of these polarizing times,” Gilbert said. He pointing to the 2004 election, when former President George W. Bush won his second term in office, but narrowly lost this state, as perhaps the beginning of strained relations among voters in the Dairy State.

In a broader sense, Gilbert also touched on the state of the nation’s top two parties and the unprecedented times both camps face with a commander in chief who readily takes to social media and espouses unfiltered comments.

“Not many people think the swamp has been drained — if they wanted the swamp drained,” Gilbert said of the comments he has gathered from the voters he has talked to in his reporting.

Trump voters, he said, have displayed a full array of comments amid his reporting efforts, which might reflect the current mood across much of the country. Diehard supporters are cheering him on for being a political outsider, while other voters are frustrated by the continued paralysis in Washington, D.C.

Gilbert was pressed on how the media plays into today’s polarization — particularly with a current president who has made the phrase “fake news” part of the cultural lexicon.

“There’s enough out there to frustrate everybody,” Gilbert said. “There’s some segment of the media that is going to piss you off.”