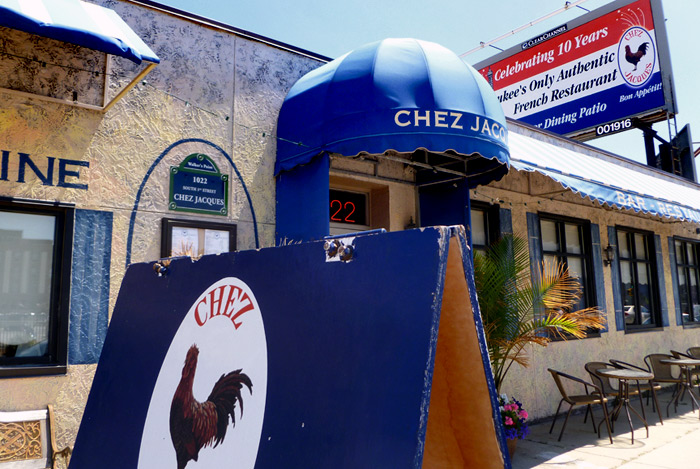 Taco-loving night owls in Walker’s Point may soon have a new spot to satisfy their late-night cravings. The former Chez Jacques (1022 S. 1st St.) is slated to become a new Mexican restaurant in early 2018. The proprietors are Kevin Lopez and his mother Judith Figueroa, and the plan is to keep the restaurant open well past bar time.

OnMilwaukee describes Lopez as “a long-time industry veteran with experience in both front and back of house.” While only a few details are available about the venture, Lori Fredrich has some information:

Lopez says the restaurant will serve some traditional Mexican fare including burritos and traditional tacos. “But it won’t be what people expect,” he says. “We will be doing something really different, something with a bit more color and variety…”

“We looked at a number of places for the restaurant,” says Lopez. “At least one was downtown, but this space seemed perfect for what we wanted to do.”

Lopez was able to acquire the space after plans for a Martini bar and lounge fell through in July.

It’s called the Birch + Butcher restaurant, located at 459 E. Pleasant St., in the first-floor retail space of the  North End Apartments on Water and Pleasant and it’s run by executive chef/co-owner Miles Borghgraef (a former chef at Lake Park Bistro) and his partner Rebecca Zwiefelhofer. And it’s got an interesting menu and approach, as Milwaukee Magazine’s Ann Christenson reports:

The B+B staff opened its retail shop last weekend (Nov. 11), selling fresh and cured meats – both made on premises and by Madison’s Underground Meats (known for incredible hard salamis, soft, spreadable nduja and others)…

The Midwestern menu, showcasing the wood-fired hearth in the center of the open kitchen, starts with various little bites, including charcuterie, charred squash with squash butter and togarashi, BBQ parsnips with harissa and yogurt, green chorizo with green mustard, and lamb tartare with lemongrass, malted cashews and crispy onions ($1-$9). Larger creations range from sunflower seed risotto with king trumpet mushrooms and sweet and sour herring on toast with egg and onions to butter-poached steelhead trout with lardo and salsa verde ($12-$18). The largest plates are aged pork chops with baked beans and onions, seared brisket steak with cabbage and agro dolce, meatballs with sweet potato ketchup and funyans, and birch syrup-glazed 3BF chicken with roast carrots and chestnuts and others ($15-$26).

The Middle-Eastern inspired restaurant which serves eggs, bagels, paninis and soups will be adding another location on the Northwest side. Sababa Cafe is expected to open by the end of the month, and will be similar to the original Sababa.

Owner Ed Wahhab spoke with Fredrich about the new addition:

The menu will largely resemble that of the Downtown location – at 391 E. State St. – including a salad bar, soups and panini. However, it will feature a number of additional dishes, as well.

“There will also be specials that we offer that won’t be on the regular menu,” he says. “We want people to try things out. We will also offer catering for corporate lunches and events.”

Wahhab says Sababa Cafe will be open weekdays from 7 a.m. to 3 p.m.

There’s no shortage of Grimaldi’s pizzerias. The national franchise boasts about 50 of them in 16 states serving “coal brick oven” style pizza. Now you can Wisconsin to the list, and where better than Brookfield? Yes, the new Grimaldi’s Pizzeria (20119 Lord St.), at The Corners of Brookfield, promises to bring “New York City”-style pizza with chain retail flavor to the metro area.

Or as Melanie Lawder of the Milwaukee Business Journal puts it:

Big Apple-themed decor and photographs are prominently displayed around the dining spot and the restaurant’s New York City roots can easily be found influencing the pages of the menu, which features calzones, pizza, antipasto, as well as New York-style cheesecake and more…

Additionally, Grimaldi’s features an open kitchen — with a 25-ton coal-burning oven to fire up its thin-crust pizza — as well as a bar area that serves specialty cocktails, craft beers and a diverse selection of wine. Diners can expect photographs of the Rat Pack, the Statue of Liberty and New York skylines to adorn the walls.

Sake Tumi is giving its dining experience a face lift with changes to the dining area and menu. New items will be added to the menu in order to appeal to a more diverse dining crowd.

General manager David Hinton told OnMilwaukee the changes are an attempt to “breathe new life” into the restaurant, as Fredrich reports:

Over the next few months, the restaurant will also roll out a number of new interior upgrades including new banquettes, table linens, improved lighting and the addition of televisions for broadcasting athletic games…

Those who enjoy friendly competition with our flatlanders to the south may need to find a new game-day hangout now that the Third Ward’s Rivalry bar (223 N. Water St.) has closed. The bar revolved around team rivalries between Wisconsin and Illinois with Chicago games shown on the lower level and Milwaukee games shown on the main floor. Owner Joshua Janis told the Journal Sentinel the bar has been closed for two weeks, as Carol Deptolla reports:

Janis, 34, who also had opened Refuge Smoothie Cafes for a time and previously was a partner in McGillycuddy’s bar downtown, said he now has left the food and beverage industry. He had been involved in owning bars or restaurants since he was 22, when he opened Three on Milwaukee St.

Janis said he will be coaching Brazilian jiu jitsu and organizing seminars in the sport, which he’s been involved with for 12 years, and also is advising clients who are entrepreneurs.

Rivalry opened at its Water St. location about a year ago. Janis declined to name the new tenant for the space.