By Gretchen Schuldt, Wisconsin Justice Initiative - Nov 14th, 2017 12:49 pm
Get a daily rundown of the top stories on Urban Milwaukee

The State Department of Corrections was unsure it could find enough contract beds in jails to house prison overflows even before State Sen. Leah Vukmir introduced a bill that could increase the prison population by an estimated 1,800 inmates per year, records show.

Vukmir (R-Brookfield), who is running for the U.S. Senate, is co-author of a bill that would require the Department of Corrections to recommend revocation of probation or extended supervision for anyone charged with a new violent misdemeanor or any felony.

The State Senate approved the bill this week. Recidivism is down sharply in Wisconsin.

DOC already was expecting that new, tougher drunk driving laws would mean that an additional 1,205 inmates would be sentenced to prison by the end of the law’s second year, DOC said in its 2017-19 budget request.

The department’s adult division already is contracting for beds in county jails to house prison inmates, the budget request said. “It is believed there are not enough contract beds available around the state to house the projected populations,” DOC said in its budget request.

DOC estimates Vukmir’s revocation bill would send an additional 1,800 people to prison per year and cost the state $57 million per year, according to the Milwaukee Journal Sentinel.

There has not yet been any official fiscal estimates made of the overall cost of the bill, according to public documents available on the Legislature’s website. The Journal Sentinel reported that Assembly Speaker Robin Vos has hired the Council of State Governments to estimate the cost, something generally done by state agencies.

In public hearing testimony, Vukmir said that “Wisconsin’s approach to criminal justice should be a two-pronged philosophy. Ensuring violent repeat offenders are no longer terrorizing our communities is as equally important as implementing alternatives to incarceration, if not more so.” 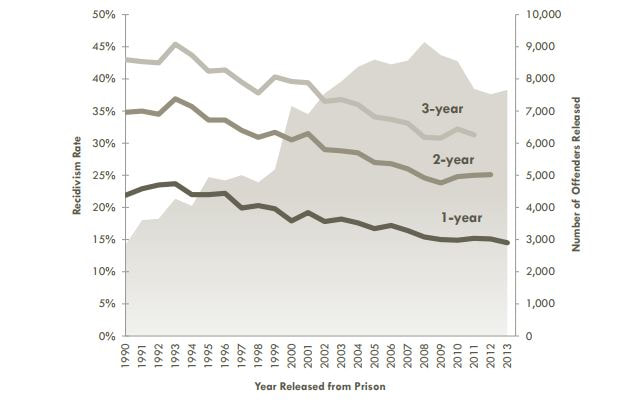 Recidivism is down sharply in Wisconsin. Source: Wisconsin Department of Corrections

Her bill, however, would ensnare far more than violent offenders — it would force a revocation recommendation if a person picked up any felony – even second offense marijuana possession –  while on probation or parole.

The Senate bill also provides no relief for individuals cleared of a crime or found not guilty in court. The Assembly version of the bill allows the department to change its recommendation if either of those things occur.

Vukmir’s proposal, according to the State Public Defender’s office, “will have several impacts which are more severe than perhaps anticipated by the author.”

The Senate bill provides no relief for individuals cleared of a crime or found not guilty in court.

One issue is a “potentially unconstitutional burden shift for extended periods of incarceration,” the public defender’s office said in March testimony.

There are times that new charges are not pursued in cases involving people on supervision; their status is simply revoked and they go to prison. Revocation does not require proof beyond a reasonable doubt, as convicting someone does; it requires only the same probable cause standard a prosecutor needs to issue charges, the agency said.

In addition, a violation during a term of supervision can result in re-incarceration for the full term, it said. A person serving 10 years of extended supervision who commits a crime in the ninth year can be incarcerated for the full 10 years, the agency said.

“This bill may result in a significant number of new prison terms, which will neither be cost effective nor have a substantially beneficial impact on future criminal behavior,” the public defenders office said.

And the League of Women Voters was short and sweet: “With the Wisconsin prison population on the rise, removal of DOC discretion here is similar to increasing mandatory sentencing, the continued expansion of a bloated Corrections budget.