By Marguerite Helmers - Nov 6th, 2017 04:10 pm
Get a daily rundown of the top stories on Urban Milwaukee 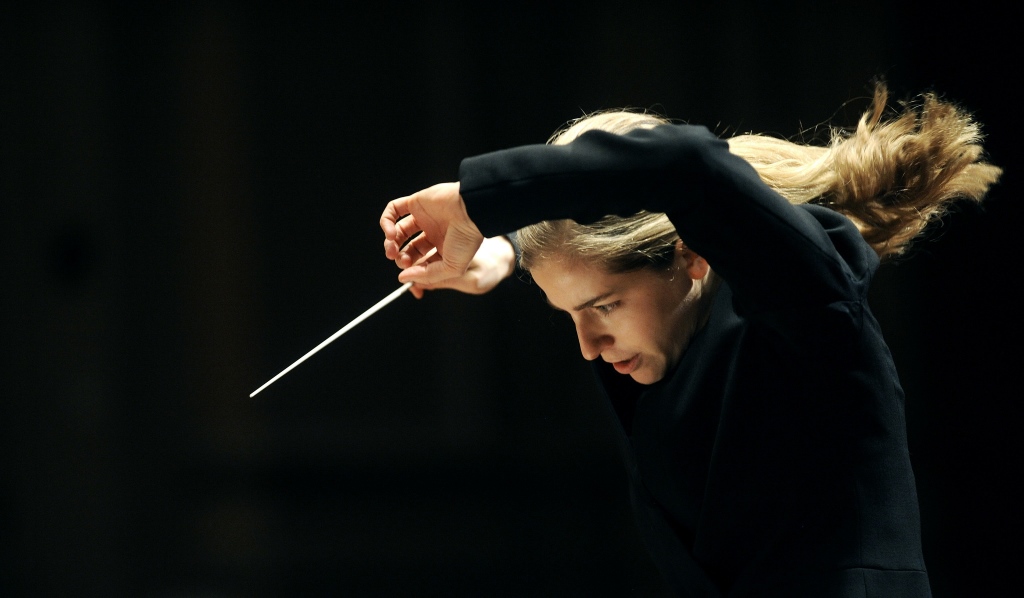 Canellakis won the 2016 Sir Georg Solti Conducting Award. Originally trained as a violinist, she played with Berlin Philharmonic and Chicago Symphony before turning to conducting and obtaining a masters from Juilliard. The last three years have seen her conducting debuts in the United States and Europe. In a 2016 interview, Canellakis said that her desire to conduct “came out of being inspired to know more about the score, the details of the piece, and to know what everyone else was doing, not just the violin part.” She also credits her father, who is a conductor.

The concert opens with an eleven-minute work titled Mixed Messages by American composer Nico Muhly. Muhly is known to cross genres in his music. He has collaborated with the pop star Björk and composed the scores for the films Kill Your Darlings and the Academy Award-winning The Reader.

Mixed Messages calls for a full orchestra and a percussion section that includes piano, bongos, and sleigh bells. Agitated strings are punctuated by percussive moments and fragments of brass fanfare. Unlike Romantic music that develops a theme, this piece accumulates, adding musical phrases and instrumental groupings.

Karol Szymanowski‘s Second Violin Concerto is music on a Wagnerian scale that also incorporates Polish folk music and a hint of the blues. Credited with a wholly individual musical voice, Szymanowski’s music has been called cosmopolitan, sensuous, opulent, decadent, and intense. Syzymanowski was in Paris during the jazz years of the 1920s and admired the compositions of Maurice Ravel.

The twenty-minute concerto is divided into four movements, performed without interruption. The violin does not engage in a dialogue with the orchestra, but contributes to the overall fabric of the colorful composition. The solo line is filled with double-stops, drones, open octaves, and folk-sounding fifths. A concerto of contrasts, its tranquil, reflective moments are interrupted by cinematic passages for full orchestra punctuated by bold commentary from the brass and winds.

The concerto opens with a three-note motive in E minor, a triad based on the Podhale Goralski scale of the Polish Highlanders. Igor Stravinsky’s use of folk song in Petrouchka persuaded Szymanowski to incorporate Polish folk music into his compositions. He wrote, “Today I have developed into a national composer, not only subconsciously but with a thorough conviction, using the melodic treasures of the Polish folk.” He marked the end of his Second Violin Concerto with a note reading “Zakopane,” referring to the artists’ colony in the southern Tatra Mountains, south of Krakow and on the border with Slovakia. Here he retreated to his 19th century wooden chalet Villa Atma to compose the concerto.

The cadenza is attributed to Szymanowski’s close friend Pawel Kochański. It is almost a full movement in itself. Kochański was dying of cancer as he helped Szymanowski with the composition and premiered the concerto in Warsaw in 1933. Kochański was so weak that he had to play sitting down. Szymanowski himself was in poor health, suffering from tuberculosis and this was his last major piece.

Jennifer Koh will perform the concerto. She has premiered and recorded many works by contemporary composers and credits over sixty works written especially for her.

Pyotr Ilyich Tchaikovsky’s Fifth Symphony in E minor (Op. 64) premiered in St. Petersburg 1888 with Tchaikovsky conducting. He thought the piece was a failure. At forty-eight, he felt tired and old–and he was still smarting from a comment made a dozen years earlier that he was “played out as a composer.” Despite a generally positive reception, he wrote that “there is something repellent, superfluous, patchy and insincere in it” and claimed that he much preferred the Fourth Symphony. However, by the time the piece was performed in Hamburg in 1889, his mood had brightened and he hoped that Russians would recognize his success.

Leonard Bernstein called the Fifth “a symphony of waltzes.” Tchaikovsky wrote that his subject was “Providence… the predestination of fate.” The symphony opens with the main theme played by two clarinets. This has come to be known as the theme of Fate. It recurs as an idée fixe throughout the symphony. The second movement also opens quietly with solo French horn that gradually merges into a duet with the clarinet. The third movement, a melancholy waltz, leads into the emotional transformation of the theme in the final movement. Changing into the major key, the symphony ends self-confidently and courageously.