By Jabril Faraj, Milwaukee Neighborhood News Service - Nov 1st, 2017 11:10 am
Get a daily rundown of the top stories on Urban Milwaukee 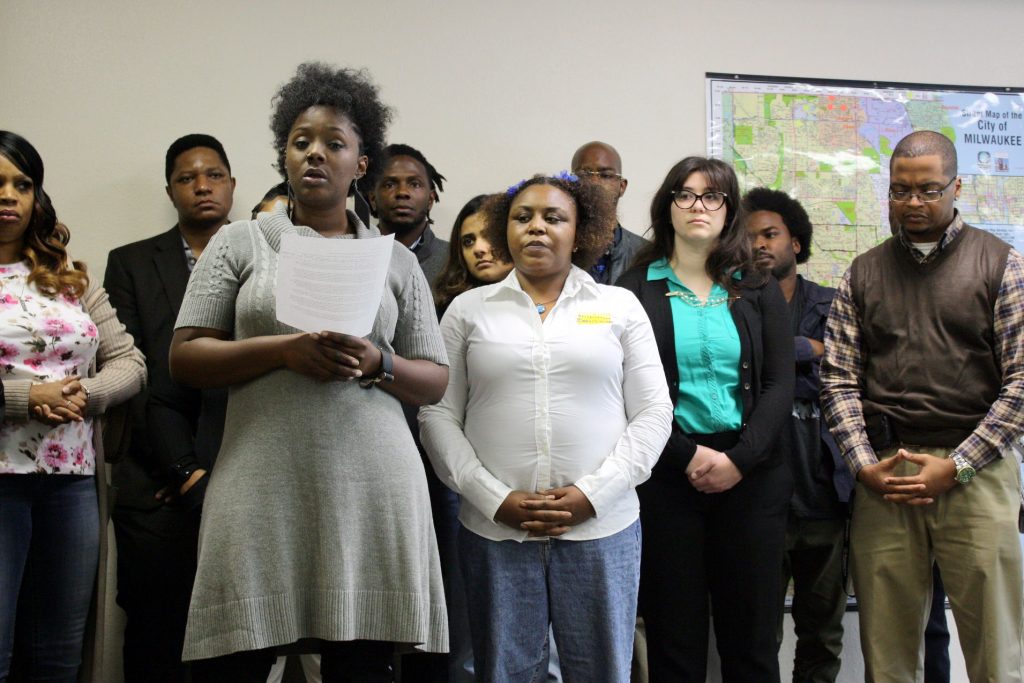 Markasa Tucker speaks during a news conference as representatives from the ACLU and Coalition for Justice look on. Photo by Jabril Faraj.

Community groups are taking the lead in addressing recommendations of a draft Department of Justice Report — leaked in August — that focuses on the Milwaukee Police Department.

According to the report, MPD lacks racial and gender diversity, has inconsistent body camera policies, does a poor job of documenting and processing citizen complaints and practices a traffic enforcement strategy that disproportionately affects African-Americans. It also said officers do not understand community policing, which the department claims it has practiced for years.

At a Sept. 14 Steering and Rules Committee meeting, MPD Chief Ed Flynn attacked the credibility of the draft report on the grounds it was created by consultants — a practice Flynn acknowledged is not out of the ordinary — and is oversaturated with “anonymous personal anecdotes.” At the hearing, Common Council President Ashanti Hamilton called on MPD and the Fire and Police Commission (FPC) to work with the Common Council and community to create a community-led public discussion regarding the report’s recommendations and how to move forward.

Hamilton framed this process as an opportunity to build trust in a community-police relationship that has been strained by high-profile police killings of black men and allegations of misconduct. He said, “From the side of the community it’s just feeling like many of their stories, many of their experiences, have not necessarily been a focal point.”

A week after the hearing, the FPC decided to continue the reform process, which had been dropped by the DOJ Office of Community Oriented Policing Services (COPS). Days after that decision, Flynn struck a different tone, saying it was up to the police and community to work together to address crime.

But more than a month later, prominent community groups have heard little from the FPC, MPD, Mayor Tom Barrett or the Common Council. September letters — one from the Dominican Center for Women and another from the African American Roundtable went unanswered for weeks, according to representatives of the organizations. 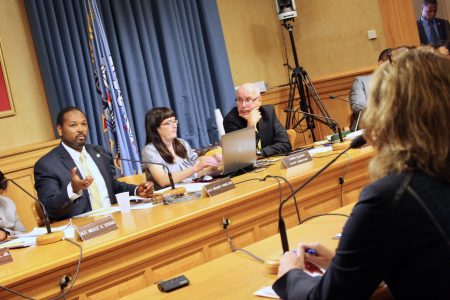 In response, a coalition of organizations — including the ACLU, Milwaukee NAACP, UBLAC, Coalition for Justice and more — announced at a recent news conference that it has scheduled two town hall meetings. The goal of the meetings — on Nov. 30 and Dec. 2 — are to make sure the community “gets the information that they need” and that the recommendations aren’t “swept under the rug,” according to Markasa Tucker, director of the African American Roundtable.

“We’re used to this,” she said. “Everybody knows that we constantly have to push forward and we have to come and speak up when we want to see change. We can’t expect, or wait, for city officials to come and do that for us.”

Executive Director MaryNell Regan said the FPC plans to announce a process to engage the community later this week. She said a lot of planning has happened so far, but, “The process isn’t completed yet.” She added that the FPC has been in touch with some groups, but did not name them specifically. When asked if the FPC will help publicize the town halls and take the feedback from those sessions into account, Regan said, “Of course.”

Hamilton, who met with Tucker late last week after the news conference, said the African American Roundtable has already taken a leadership role in the process, adding that it will have “100 percent cooperation” from the Common Council in publicizing and staffing the town halls. He acknowledged that some of the organizations and people “who have been involved from the beginning” have not been properly engaged.

“It [is] my intention … that they be at the table,” Hamilton said.

The Dominican Center, in Amani, has partnered on two recent grants with MPD, the Building Neighborhood Capacity Program (from 2012 through 2015) and the Edward Byrne Memorial Justice Assistance Grant Program, still in progress. MPD administers the Byrne Grant, and partners meet every two weeks. But, according to Rogers, in the three meetings since the Common Council hearing, the DOJ report has not been addressed with the group, either by Flynn or the District 5 captain who attends partner meetings.

She expressed disappointment about the lack of initiative, saying, “They have not been true partners to the community.”

For things to change, she said it is important for police to sit down with people and listen to what they think will work. “None of them think that we’re going to police our way out of this craziness that’s going on,” said Rogers.

Nate Gilliam, part of the People’s Progressive Organizing Committee, called the city budget “out of whack,” noting 47 percent of the city’s almost $633 million 2017 general budget goes toward funding MPD. He said it is simplistic to equate public safety with police and that more money should be invested in youth programming, job creation and social services, areas that could “tangibly help improve the situation within the city.” He suggested that kind of investment would lead to less crime and a better quality of life for people.

The Milwaukee Police Department did not respond to specific questions regarding city funding or Rogers’ criticisms. Sgt. Timothy Gauerke provided an email statement, writing that MPD “looks forward to collaborating with elected and community stakeholders to prioritize and move forward with implementation of recommendations in the report.” He added that Flynn is still committed to the process.

State Rep. David Bowen said it’s essential to have an authentic conversation about how to get everyone on the same page and start working together.

“There are really no sides to having a police department that’s accountable to its community,” Bowen added.