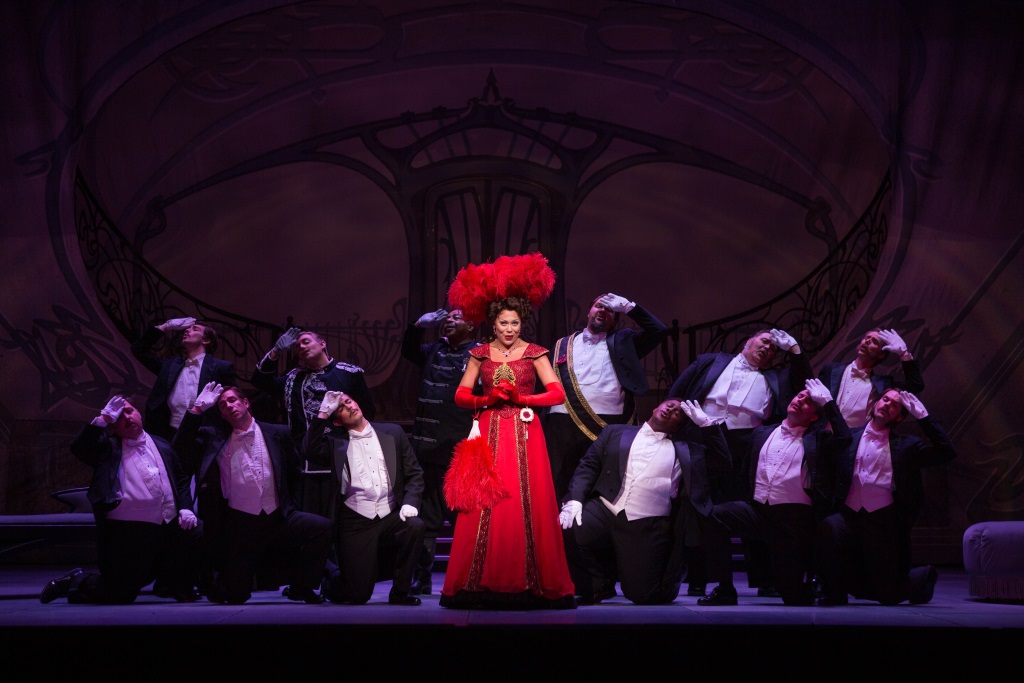 Despite its famous melodies, Florentine Opera’s The Merry Widow was not looking so merry in the first of its three acts.

The second became a pastiche of styles, better than a first act where the cast was playing the humor so blandly and the singing so routinely that it seemed like a long predictable evening ahead. The show ran on Friday night, followed by a Sunday matinee.

And by the third act the decision was clear — let the energy flow, the can- can invigorate and ignore the complicated plot of misguided lovers. That was also the act that rescued tenor Rodell Rosel, turning him from annoyingly childish factotum to a show-stopping cabaret host.

Dating from 1905, Franz Lehar’s The Merry Widow has enjoyed runaway popularity existing between low operetta and high operetta — the high because of some musical passages that challenge the greatest human voices and the low because it can be a burlesque, a Maurice Chevalier movie (“I’m Going to Maxim’s”) or a vehicle for comic actors in some roles and opera singers in others.

It is being sung in English, which (strange for me to complain) is not as flowing for the singers as the original German. The libretto has more talking than singing — but frankly the supertitles get more laughs than the performers. Once their speaking voices bounced around chest cavities and tortured enunciation, much of what they were saying was hard to pick out in cavernous Uihlein Hall.

There were interludes of famous romantic music with conductor Joseph Rescigno and the Milwaukee Ballet Orchestra providing workmanlike lyricism – nothing stellar but certainly serviceable.

Someone also decided the comic or overly arduous moments should be played full or three-quarters front with little intrusion of human interchange, along with too much reliance on the lilting tenderness of the famous central waltz.

There was never a clean decision on a stylistic spine, so the performers who had done the parts in many different productions before just seemed to be landing on that memory. The audience just waited for something to work.

And some things did. Usually the Florentine can be counted on for singers of or near world class. But only Alyson Cambridge as the titled widow and Corey McKern as the Danilo she really loves had voices deserving that stature, he with a personality that made his baritone real not showy, she with a power on high notes and a sense of musicality. I suspect that she has stronger acting chops than displayed here, but the famous “Vilja Song” was well handled. McKern caught more of the take-charge manner of Danilo, which also aided his switch from romantic numbers to comic excursions.

The quintet singing was accurate, though some of the individual voices faded away. A different problem afflicted bass Jamie Offenbach. He was solid with the occasional singing, but he and his hands couldn’t decide how buffoonish to play the Baron.

In the flirty role of the Baron’s scheming wife, warm soprano Stacy Dove has to keep her voice smaller than Cambridge, who relishes the flourishes the widow’s role allows. Dove was inconsistent in an inconsistent production, but she delighted the audience by keeping up with the ballet corps at Maxim’s.

As her not so secret lover, tenor Vale Rideout has an inviting sound and manner, but seemed to over-attack the high notes.

Over the decades, Merry Widow has been a staple for both the Florentine and the Skylight. Its familiarity should not breed dismissal of the emotional vignettes in the plot’s unfolding and the genuine comic possibilities inherent in the confusions over who’s in love with whom and who is hiding the telltale fan of the unfaithful lady. An operetta that can range from luscious beauty of song to risqué ballads to connective motifs was given short shrift by a Florentine Opera that knows and has done better. 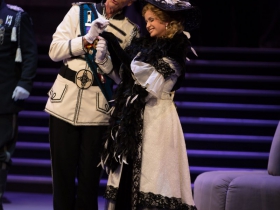 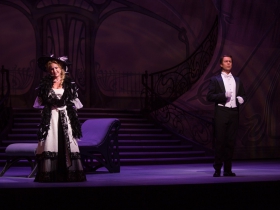 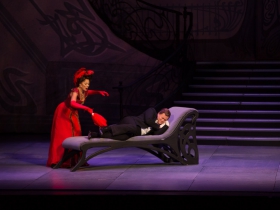 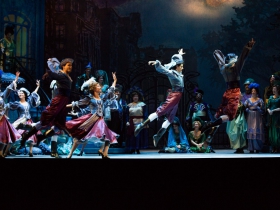 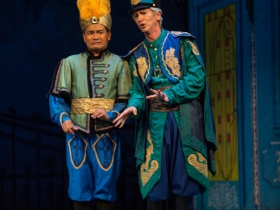 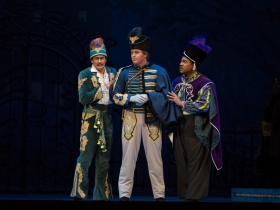 2 thoughts on “Classical: The Not Always ‘Merry Widow’”