By Wisconsin Democracy Campaign - Oct 23rd, 2017 11:50 am
Get a daily rundown of the top stories on Urban Milwaukee 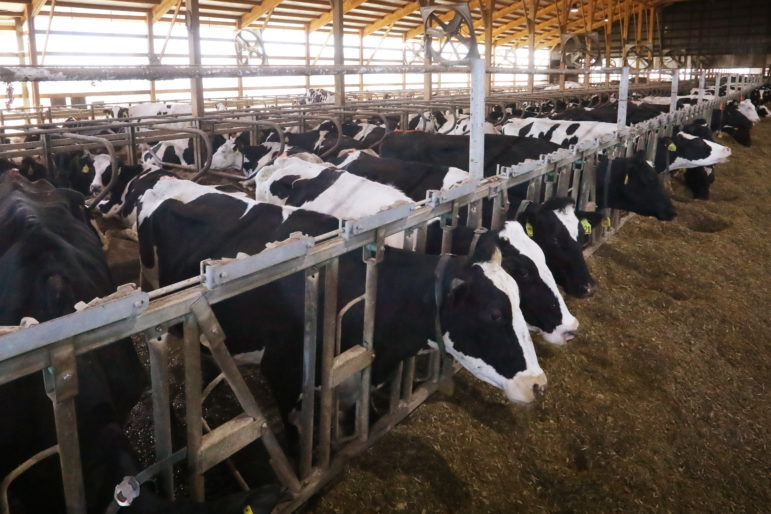 Dairy cows. Photo by Coburn Dukehart of the Wisconsin Center for Investigative Journalism.

This week, the Wisconsin Department of Natural Resources (DNR) gave in to the Dairy Business Association, one of the most powerful special interest groups in the state.

It did so by settling the lawsuit that the Dairy Business Association had brought against the DNR on terms that were highly favorable to the big dairy group, which goes to bat for factory farm owners.

In the settlement, the DNR agreed with the Dairy Business Association on these two charges and pledged to stop engaging in those kinds of regulation.

In return, the Dairy Business Association agreed to drop another claim it was making – that the DNR exceeded its authority by requiring factory farms to apply for a permit for their discharges.

The Dairy Business Association cheered its victory: “The settlement will bring immediate relief for dairy farmers facing uncertainty and costly changes, and will provide assurance that the DNR will create future rules only according to the law,” the organization said in a press release.

The Dairy Business Association is backed by dozens of wealthy special interest sponsors that have contributed more than $2.1 million to statewide and legislative candidates, including more than $710,000 to Republican Gov. Scott Walker in recent years.

A recently formed front group for factory farms and other industrial polluters, the Wisconsin Water Alliance, also praised the settlement, calling it “a major victory for farmers, landowners, and the rule of law.”

One of the three named officers of the Wisconsin Water Alliance is Deric DuQuaine, who is also general counsel of MilkSource LLC, which operates about a half-dozen large factory farms throughout Wisconsin. MilkSource’s owners have contributed more than $130,000 since January 2011 to Walker.