GMF oversees 5,000 people at 200 locations in metro area “On the Table” discussions.

By Elizabeth Baker, Milwaukee Neighborhood News Service - Oct 20th, 2017 10:18 am
Get a daily rundown of the top stories on Urban Milwaukee 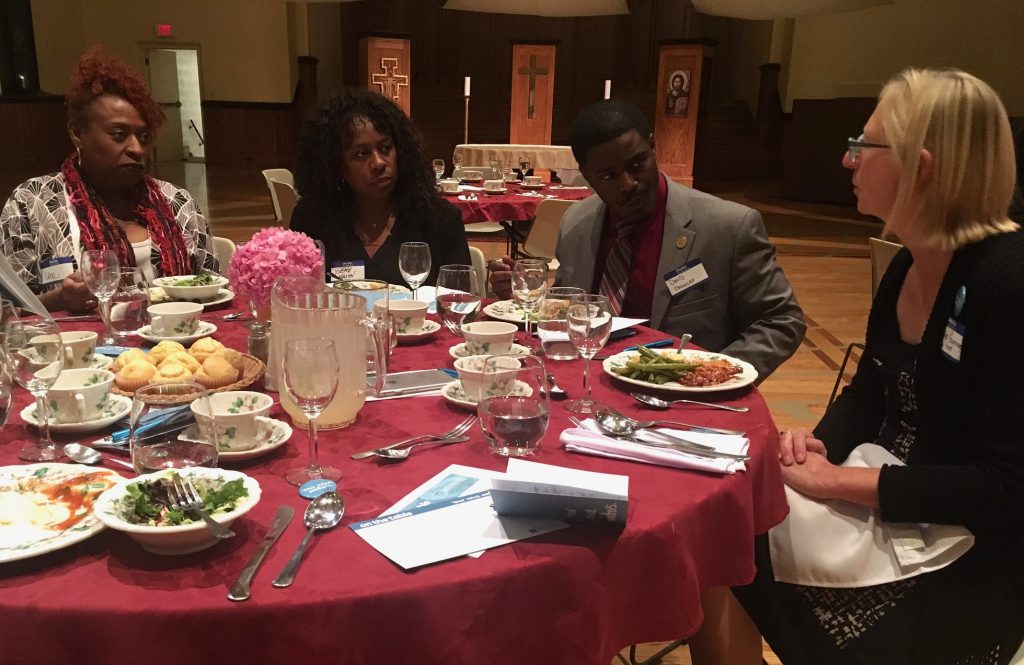 A nurse, a state representative, a retired public school teacher and two nonprofit case managers sit down for dinner. The issue on the table? Housing in Milwaukee.

Conversations like this — among people from diverse backgrounds, organizations and ways of thinking — rarely occur. On Tuesday, however, groups all over the city and the region came together to talk about ways to improve the community as part of On the Table, an initiative of Greater Milwaukee Foundation (GMF).

At Calvary Presbyterian Church, 935 W. Wisconsin Ave., the topic for the night was housing, place making and home. About 25 people attended.

Yvette Mason, a case manager at SET Ministry who works to provide housing for the chronically homeless — those who have been displaced for at least 12 months — came to learn what others think about the programs and organizations addressing housing in Milwaukee. 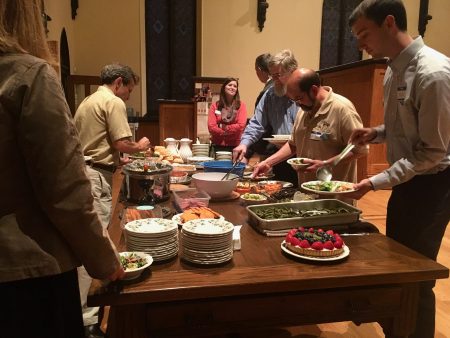 People fill their plates in preparation for their mealtime conversation. Photo by Elizabeth Baker.

Also at her table was State Rep. David Crowley, who shared the story of how he moved every single year between his freshman year of high school and age 25. In fact, Crowley said he plans to introduce an eviction and discrimination prevention legislative package this week.

However, he told his dinner companions that lasting solutions will come from spreading awareness of the problem.

“You can always put policies in place, but they still have to be practiced,” he noted, citing discrimination as an example. “We have to change the culture. We use policy to push the message out there, but that doesn’t necessarily create good actors.”

Una Van Duvall, a manager at the Nonprofit Center of Milwaukee, said housing represents a connection among all the issues Milwaukee needs to address — economics, education, race, gender and more.

All the dinner conversations at the church reflected the complexity of the problem, as people shared their experiences, opinions and ideas on successes and failures in cities similar to Milwaukee, poverty, education, family life, gentrification and healthcare.

Jonnie Guernsey of Calvary Presbyterian helped choose this particular topic after an experience she had trying to help a young man who was on the streets find a place to stay. She said it was terribly difficult, and the man grew very agitated with the process.

The church often partners with nonprofit groups in the city to serve homeless people.

Vice President of Civic Engagement at GMF Marcus White said Calvary Presbyterian’s long history of social engagement and location in the heart of downtown made the church a great host for this conversation. “It’s really encouraging to see that they’re taking on a very specific, difficult topic.”

On the Table conversations took place all over the city and throughout Milwaukee, Ozaukee, Washington and Waukesha counties Tuesday. White said more than 5,000 people participated in more than 200 locations. Any organization, group or individual could volunteer to host one or many tables and discuss the topic of their choice, as long as the general focus centered on improving the community.

This open-endedness and flexibility was GMF’s strategy in planning its first ever On the Table, White said. “We just wanted to put an idea out there and encourage people to use On the Table as a vehicle for their own conversation.” White added that GMF was pleasantly surprised at how many groups crafted topics that align with both the theme of the region-wide initiative and their own organizational missions.

After collecting input from On the Table participants, GMF will write and make public in the coming weeks a report on what issues were identified as the most prevalent and important, White said.