How a Church Became a Home

Adventist church from 1920s on Van Buren is now one of the area's oddest homes. 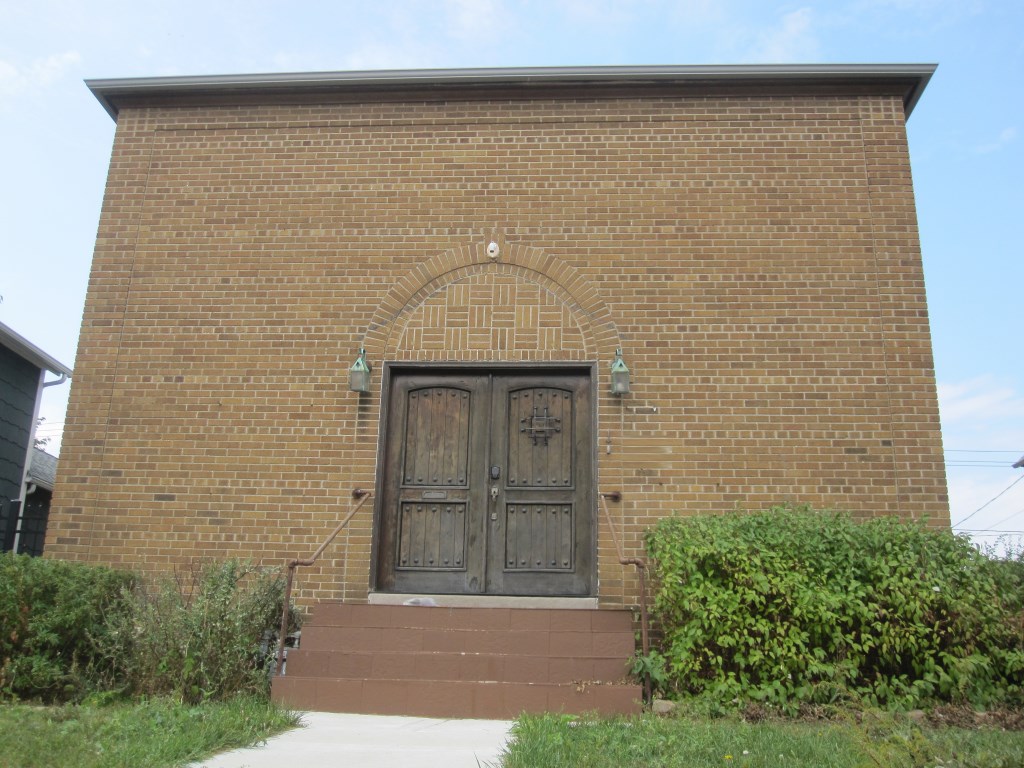 The blank, unornamented brick facade of this Lower East Side home on N. Van Buren St. stands in stark contrast to its Victorian neighbors, all of frame construction, older, larger and of unquestioned residential origin.

Nor, unlike its neighbors, does this highly visible outlier have any first floor windows facing the street, giving it a foreboding presence. The severity of the visual impact is heightened by a stout, solid oak double entry door, centrally placed, with a single tiny window protected by stout iron bars.

So what was this place? Who built it, and why?

On October 18th, 1921, the Adventist Italian Mission received permit #26114 to construct a temporary chapel here of 18 feet in breadth and 24 feet in depth, yet only ten feet high. For an unknown reason, perhaps related to the newly enacted zoning code, construction of the building required a resolution of the Milwaukee Common Council, which passed on October 14th, 1921. The temporary chapel had an expiration date: “to be removed as will be directed by the Common Council,” the permit clerk wrote.

Construction moved quickly on what must have been a rather insubstantial structure. Two days after the permit was issued the inspector passed by and noted, “Frame Up and sheathed.” Scarcely two weeks later, on November 7th, the inspector came by and noted tersely in his record: “Complete.” It made quite a contrast with the neighboring homes.

Before the first Holton Viaduct (1894) connected it at its north end to what is now Riverwest, Van Buren St. dead-ended at the Milwaukee River and reached within a couple blocks of the river at its southern terminus two miles south in the Third Ward.

The opening of the viaduct, equipped with streetcar tracks, turned N. Van Buren St. into a prominent thoroughfare. To capitalize on the newfound traffic, a number of the old homes perched on the hill sprouted first-floor retail spaces from what had been their basements. These remain, under various uses.

The northern end, where this home is located, is the highest point on the street which, due to grading to accommodate the bridge, runs a good ten feet below the homes. Only in the high ground, like here, were the truly fine homes to be found, built for a mix of Germans and white Anglo-Saxon protestants. These large homes were sited to capture the breezes of what little fresh air prevailed in the hodgepodge of tanneries, sausage makers and other industrial processes, all of which made use of the neighboring stream as a convenient sewer, adding its unhealthy miasma to the coal-fired haze emitted by the many power plants in the area.

The housing stock and public health rapidly deteriorated toward the river, just a few blocks to the west and north. There, near their places of employment, lived the workers, largely immigrants, many of them Sicilians squeezed out of the crowded Third Ward. It was an easy commute to get to work, since both home and job were located at the bottom rung of the economic ladder.

Recent immigrants, particularly from Roman Catholic backgrounds, have always been courted by Evangelical churches and other proselytizing religions like the Seventh Day Adventists, and such was the case here, where a spare lot was available in a transitional neighborhood for this temporary chapel to convert Italians, which would soon become a more permanent structure.

A Brick Church for Adventists

In 1927, church elders felt sufficiently comfortable in the location that they authorized a $5,000 expenditure for a full-fledged church of masonry construction to be designed by Albert J. Petelinz and built by contractor E. C. Knuth. (City records incorrectly date the structure to 1917.)

Today this church is a residence, but it took some time to get to that point.

With dimensions of 26 feet by 42 feet, it had a much larger footprint than its predecessor, and at 15 feet in height, it was half again as tall as the old chapel, but was still no cathedral in height or aspect. The new church was still just a third the size of the neighboring mansions, today largely converted to multi-family residences.

The church went about its activities saving the immigrant residents, but as the years wore on, the foreign-born Sicilian population was readily outnumbered by those born in America. Like the Germans and WASPs before them, many moved from the crowded Brady Street area as their fortunes increased, often heading to the North Shore, which, like the Third Ward and Brady Street, was comfortably bounded by the Milwaukee River to the west, and Lake Michigan to the east. The void was filled by another wave of newcomers, among them Puerto Ricans.

By 1942, the Southern Wisconsin Conference Association of Seventh Day Adventists was in the vanguard of another Diaspora, that of the wealthy residents of the East Side abandoning their aged yet fabulous mansions in favor of newer, less fabulous, but far more manageable mansions in the suburbs. Moving on up, the congregation purchased the Jesse Hoyt Smith House, designed by Alexander C. Eschweiler in 1913, from the estate of his widow, Ida Lane Smith. The congregation hired the same firm to convert the mansion as 2229 N. Terrace Ave. into its church, as it remains today. Meanwhile, the little church on Van Buren was in decline.

By 1960, we find the old church on N. Van Buren St. operating as a neighborhood “Welfare Workshop.” The Adventists paid electrician Ed Makowski $200 to install 100 amp service and 16 outlets in the shop.

In January 1962, officials fielded a complaint from Charles Menner, who contacted the city from his home all the way across town at 4020 N. 69th St., demanding an inspection of the Welfare Workshop.

It is not known what Menner’s particular beef was, but the busybody had a tip for the inspector, who then drafted an order to his field crew: “Check bldg. Have rummage sales on Tuesday.”

The administrative machinery of the City of Milwaukee Building Code Enforcement team was mobilized, with a duly authorized agent dispatched to the scene of the offending commercial activity on the next market day.

“Report: Bldg. 1-story church, now used for sales,” his superior was informed. Citizen Menner was on to something.

A memorandum of enforcement prepared in response worked its way through the maws of the bureaucracy: In order to continue to sell Adventist hand-me-downs, the church would have to “Provide exit light, Bas’t & 1st fl. over all exit doors; A new exit stair (& Boil encl.) is required from basement to first floor, a permit is req’d.” A contractor was hired to do the work for $300. Score one for Menner.

A Prophecy in a Crumbling Retaining Wall?

An alarming bulletin appears in the inspector’s notes of June 6th, 1962: “Fence Collapsed In Need (Church) Christian Welfare Center 7th Day Adventists.” The rear retaining wall was collapsing. “Make immediate repairs to fence,” he ordered, and four months later it was done. This, from a congregation that forty years earlier, had built a temporary chapel in two weeks. Today, the front retaining wall is deteriorating.

The Adventists sold the place, which was converted into a residence, at last. We find Rev. Moses E. James here on Halloween, 1988, as the pastor of Morning Star Unity Baptist Church.

The inspector took a look around and was not pleased.

And, just so the minister learned his lesson, the inspector added this admonitory and punitive order: “Have your Milwaukeee licensed electrical contractor take out a double-fee permit for the furnace and install same properly.”

Rev. James bailed shortly thereafter, and the home was turned into a single family dwelling, bereft at last of ecclesiastic connections, when in December 1988 it was bought by Glen Schmeig, who operated it as a straight-up home, properly permitted. In 1992 owner Thomas Brittain added a 480 square foot garage, which remains.

A second floor was added in 2001, giving the home its present aspect.

Today the home is owned by Anthony Martel, who bought it in January for $292,500. Martel may have been enticed by the poetry of the real estate agent’s description of the home:

Best of Both: Loft-type living with the privacy of separate rooms as well. Main floor is essentially one large room with 11′ ceilings: Living, Dining, Kitchen, Library areas and 1/2 bath. Front upper: Bedroom and Bath with skylights. Up the spiral stairs: Japanese Zen-inspired space with bath, steam shower, balcony, shoji screens-up above the rooftops with views of downtown and the weather sweeping in from the west! Fenced backyard deck w/Hot Tub. Two car garage. 1 block to Brady, 3 minutes downtown.

The brick cube of the original building still stands out among the Victoriana of N. Van Buren St., its blank brick facade easily attracting attention from the over 10,000 vehicles and hundreds of pedestrians and bicyclists that pass it daily. The second floor rises discreetly beyond, and shows an open face to the street. There is a slight masonry arch above the oaken double doors, the north panel of which includes an iron-bracketed Speakeasy-style window. The flanking light fixtures appear to be original. The entryway, the only feature of the facade, is located five steps up a stoop, which you don’t approach until climbing up from the sidewalk and taking a fairly level stroll to the door.

The land rises precipitously, by Milwaukee standards, from the sidewalk. Poorly laid blocks form a deteriorating retaining wall, constructed without any apparent concern or awareness of the weight of dirt and the influence of gravity. Some of its capstones have worked their way loose from their adhesive. The landscape plants, of recent vintage, are in rough shape, and invasives like knotweed are having their way. The rear retaining wall no longer poses a problem, since the 480-square-foot garage serves that function now. A chimney from the wood burning fireplace can be seen from the alley. To the north of the garage is a pile of unused retaining wall blocks that would be better employed at the front.

But these are minor issues and do nothing to distract from the overall interest of this most curious building that was once a church, and has now been converted into what is essentially a single-family loft building, which, at over $150 per square foot overall, is among the highest valued on the block.

A Footnote on Residential Conversions

Many thousands of Milwaukeeans today live in homes once designed for other purposes. Most notable are the loft dwellers who have brought vibrancy to the huge former warehouses of Historic Third Ward. Milwaukee Bucks player Jabari Parker has attracted much attention for the ongoing revitalization of a former Brewers Hill power plant as his new single-family residence, as recounted by House Confidential (“Jabari Parker’s New Bachelor Pad,” Urban Milwaukee, June 7th, 2017.) 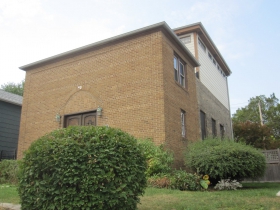 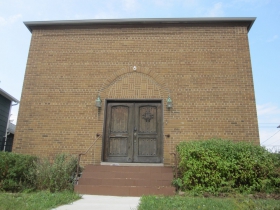 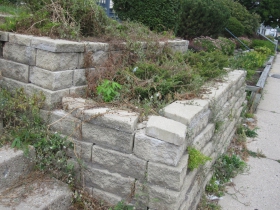 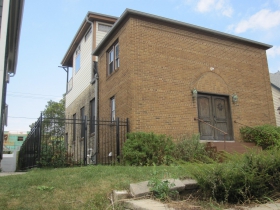 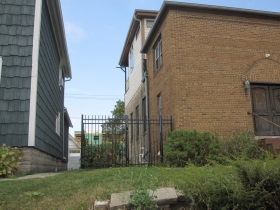 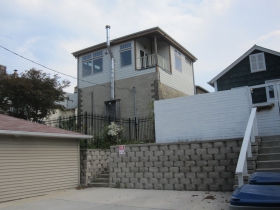 How Milwaukee Is It? The residence is one mile northeast of City Hall

8 thoughts on “House Confidential: How a Church Became a Home”