We’re All Running For Governor

Ten Democrats are running, and most were at this forum, chastising Walker. 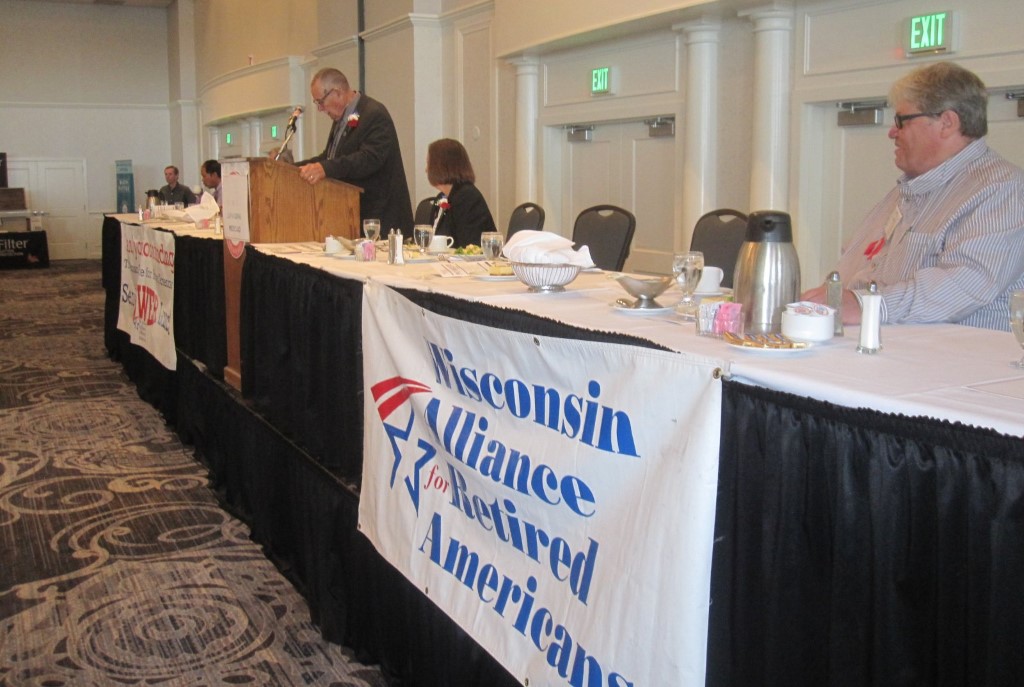 The event served as a de facto launch of the 2018 campaign for governor, and featured eight potential or announced Democratic Party candidates, along with one surrogate standing in for a candidate who was ill. A tenth candidate was not in attendance.

The WIARA has strong connections to organized labor, and many of the 175 in attendance on this Columbus Day luncheon wore shirts or badges showing their affiliations.

The event took place at the grand ballroom of the ICC, recently redecorated to the standards of the Bartolotta Restaurant Group, which has taken over the restaurant, catering and banquet operations of the Third Ward facility, now nearly 30 years old.

The first speaker was Mike McCabe, the former executive director of the Wisconsin Democracy Campaign who emphasizes his populist appeal by using the tag @bluejeansgov on Facebook and Twitter.  Mr. Blue Jeans wore a shirt with no tie, and spoke with a “Fighting Bob” fervor, showing a good deal of animation at the podium.

“Medicare for all,” is McCabe’s rallying cry, particularly in an audience of retired people waving signs reading, “I Support Medicare Expansion.” McCabe also called for statewide high-speed internet, and said that government should once again work for the people.

Milwaukee attorney Matt Flynn, an East Sider, looked just like he would if you bumped into him at Sendik’s on Downer, dressed in the uniform of his neighborhood, namely a blazer and tie. His delivery to the audience in his gruff voice showed some element of the political Pit Bull, suggesting that should he be in a position to debate incumbent Republican Gov. Scott Walker some day, Flynn might be able to tear up the guv but good.

Flynn equated Scott Walker’s honesty (or lack of, as he put it), with that of Donald Trump. Flynn noted that Walker turned down Medicaid money, and asked why. It was because Walker decided to put his political future ahead of people’s lives, he answered.

Walker “does not care about people .. he cares about pawns on a chessboard,” Flynn charged, adding that he would repeal Act 10 and “take any Medicare money I can get,” he said.

A Flynn Facebook page was not found, but presumably will soon be created. He is expected to make his official campaign announcement Tuesday.

Flynn was followed by Wisconsin Superintendent of Public Instruction Tony Evers, who announced his candidacy in August. Evers was dressed in a business suit. He promised to fully fund public education, and reminded the audience that he carried 70 per cent of the vote statewide, a claim no other Democrat can make.

This, however, was in a non-partisan race, and not a supercharged general election. Sill, his message was simple: “I can beat Scott Walker.”

Andy Gronik, a candidate from the North Shore of Milwaukee County, appeared in a jacket with no tie. He spent his career in business helping struggling companies, Gronik said, and promised “health care for all.”

Gronik (see Facebook page) vowed to “create jobs in science, technology, manufacturing and agriculture, because that is who we are as a state.” He added that “We need young people in our state because people like me are getting old.”

Gronik made a novel proposal to allow the young folks to use their state income tax levy to pay down their student debt. We must “tell young people that Wisconsin is your future. Costs are going up, revenue is going down, people are getting old and young people are leaving,” he exhorted.

Gronik was followed by Bob Harlow, who appears to exemplify Gronik’s coveted youth demographic, as the young man’s Facebook page quickly reveals. Harlow, 25, a 2016 Stanford University Physics graduate, is the youngest of the candidates and is tall, with red hair and black rimmed glasses. He was dressed in a sports coat and tie over blue jeans and sneakers.

He advocates for high speed rail and high speed internet. In 2016 he was an unsuccessful candidate for Congress in California’s 8th District, and he has since returned to his native state, where three of his grandparents were professors at UW.

“We discriminate against old people. When people reach retirement age they want to continue to contribute,” Harlow said, adding that he supported an expansion of Medicaid.

The next speaker was Kurt Kober of Sheboygan, who is considering a run for the top office, but has not yet decided whether to do so. His uniform was a jacket, no tie, over blue jeans.

Kober is the child of two public union employees, he said. He said that “we need to expand Medicaid in Wisconsin. ”

Wisconsin faces a “major generational change,” he said, echoing the words of Gronik. “Technology has changed in the last decade and will continue to change. … We must transition to a knowledge-based economy.” We must recruit and retain a skilled workplace, he stressed, addding that “people should be able to age in place. We could lead the country.”

Kober envisions a Wisconsin where “everyone has access to high speed internet access.” There could be “purposeful work no matter where you live. … We’ve done it before, we can do it again.”

The next speaker was Kelda Roys, an attorney, entrepreneur and former legislator who was dressed in a black blouse with no jacket. She was the only potential candidate dressed in maternity clothing, and made a Facebook quip earlier in the day en route to Milwaukee about her upcoming presentation:

“Heading to Milwaukee to speak to Wisconsin Alliance for Retired Americans. Hoping that spending some time with my friends in the labor movement may spur some labor movement, if ya know what I mean…” We do indeed.

Her first act as governor would be to get Medicaid expansion for Wisconsin, she said, while emphasizing that Walker’s policies in general are contrary to what we need as a state. Roys has not yet made an announcement declaring her candidacy.

Rep. Dana Wachs, who has been running for some time (see Facebook page), was not in attendance, and was represented by Pat Kreitlow, his campaign’s senior adviser. Wachs caught “a nasty bug” Kreitlow said.

The Wachs message was directed toward Milwaukee, which might get the attention of locals. Wachs “understands that Milwaukee is the engine of the state’s economy,” Kreitlow said, speaking for Wachs, adding that “Democrats need an urban core strategy” throughout the state.

“Every person needs access to healthcare and that includes an expansion of Medicaid,” he concluded.

State Sen. Kathleen Vinehout was the next scheduled speaker, but she was not in attendance, nor did she send a surrogate.

Finally the audience heard from Mahlon Mitchell, president of the 4,000-member Professional Fire Fighters Union of Wisconsin and former candidate for Lieutenant Governor. Mitchell was scheduled to speak first before the labor group but was detained at another event, and arrived late, speaking last and most. Mitchell was dressed in a suit and tie.

He opted for the call-and-response method of campaigning, which rouses the crowd and eats up the speech time without having to say much of anything.

Mitchell: “Are you Fired Up?”

This was repeated three times.

Before he really said anything, he was over his time limit, but kept speaking nonetheless, on the subject of income disparity.

Again the quiz for the audience:

Mitchell: “If the middle class has more money in their pocket, what do we do?”

Mitchell (responding to his own question): “We spend it!”

Mitchell also called for expanding Medicaid, making it unanimous — and with “no lifetime caps. Make sure we take care of pre-existing conditions,” he specified. 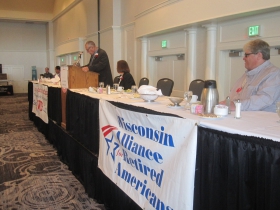 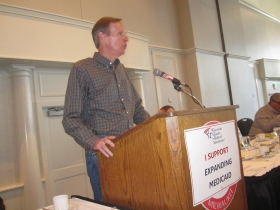 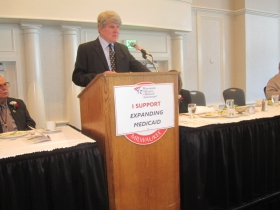 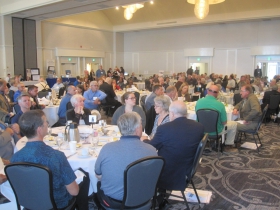 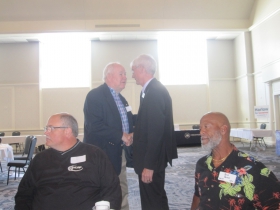 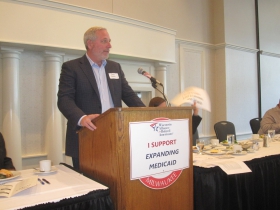 You would imagine that a place called the Italian Community Center would make a big deal about Columbus Day, but that is not the case in Milwaukee, where the luncheon, which never mentioned Columbus, was the only event in the massive building that day. Milwaukee Italians are predominantly of Sicilian background, and have not traditionally allied themselves with their non-island compatriots. The Italian community of Milwaukee is more likely to celebrate its heritage on the Feast Day of St. Joseph, the Patron Saint of Sicily, which is always celebrated during Lenten season.

10 thoughts on “Plenty of Horne: We’re All Running For Governor”