Major landscape architecture projects have had huge impact. What can we learn? 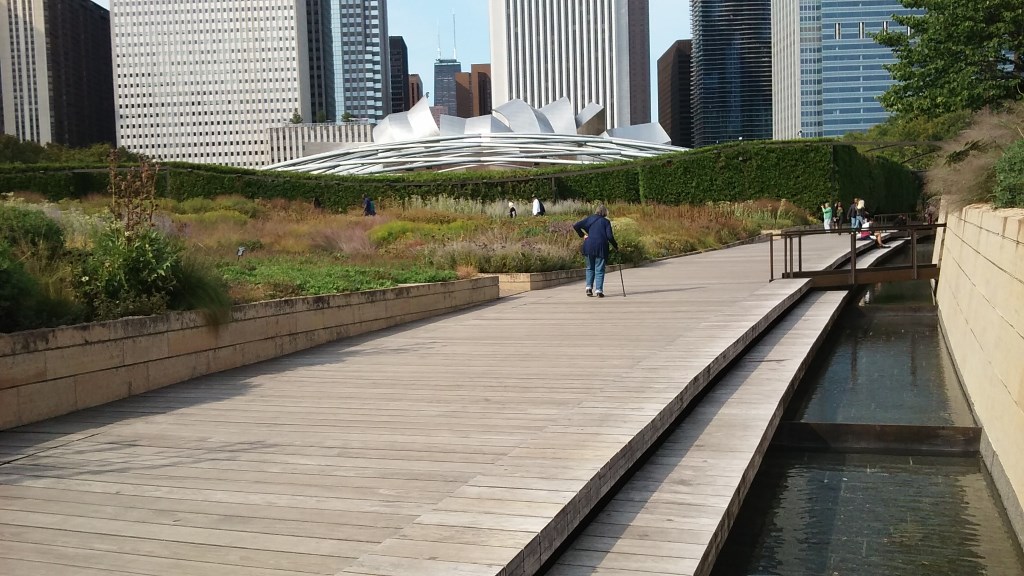 The opening of Millennium Park in 2004 in downtown Chicago is widely credited with launching a renaissance of public spaces—not just in the Windy City but nationally and even globally. The 25-acre park, built above a massive parking structure on a former rail yard, offers diverse and welcoming places for people to enjoy year-round. This ground-breaking “town square” has enhanced the city’s tourism, land values and overall cachet. It has also spurred numerous new and renovated parks, including adjacent, family-oriented Maggie Daley Park and the re-imagining of the Navy Pier.

These cutting-edge landscapes are even outpacing what’s happening with the city’s buildings, long the pride of Chicago. Blair Kamin, longtime architecture critic for the Chicago Tribune, wrote on September 9th: “As the 2017 Chicago Architecture Biennial prepares to open… the city occupies the unaccustomed position of boasting more innovation in the horizontal realm — evident in the vibrant landscapes of Millennium Park, The 606 trail and the downtown Riverwalk — than in the vertical one.”

Milwaukeeans have easy access to these exemplary spaces, whether for recreation or civic inspiration. I recently attended two programs that addressed landscape architecture in Chicago—past as well as present. In conjunction with The Cultural Landscape Foundation’s touring exhibition about modernist landscape architect Dan Kiley, the Chicago Architecture Foundation hosted a program that concluded with a stroll through the Art Institute of Chicago’s Kiley-designed South Garden. (In Milwaukee, Kiley’s Horse Chestnut Grove next to the Marcus Center for the Performing Arts has a similar mood of shaded respite. And UW-Milwaukee’s School of Architecture and Urban Planning will next host this Kiley exhibition, October 30 through January 12, 2018. 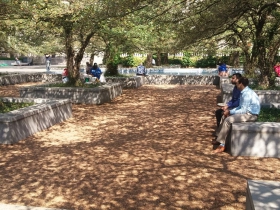 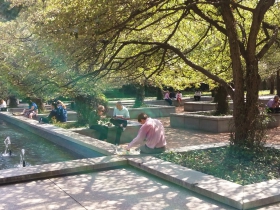 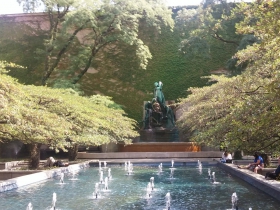 The Illinois Institute of Technology hosted a panel on the same day in Crown Hall, a modernist glass-and-steel icon designed by Ludwig Mies van der Rohe that feels like a huge treehouse. That program featured several leading Chicago landscape architects. Both events included presentations by Charles Birnbaum, founder and president of The Cultural Landscape Foundation in Washington, D.C. (an event co-host) and Ron Henderson, chair of IIT’s master’s program in Landscape Architecture + Urbanism. Henderson has been involved in landscape restorations of national and international significance. The Illinois Chapter of the American Society of Landscape Architects also co-sponsored both events.

Speakers made several references to Milwaukee. Brad McCauley, managing principal of Site Design Group, said he recently participated in a national meeting here of the American Society of Landscape Architects, which focused on Three Bridges Park. Terry Guen, master landscape architect for Millennium Park, gave a shout-out to the Urban Ecology Center for its leading-edge work.

Creative ideas are not bounded by locale—all the more so in today’s digital landscape. Here are 10 takeaways gleaned during these forums and from multiple visits to Chicago public spaces, which can help Milwaukee improve its own public spaces.

1. Successful Projects Attract The Public In Millennium Park, throngs mill around the gleaming kidney-shaped sculpture officially titled “Cloud Gate” but known as “The Bean,” as well as Jaime Plensa’s massive sculpture of ever-changing images that flank Crown Fountain. People rest on varied types of seating or on the park’s lawns. Some enjoy food and drink in an outdoor bar and café with plaza seating. There are places to enjoy quietude as well as activity, including free programming 365 days a year. 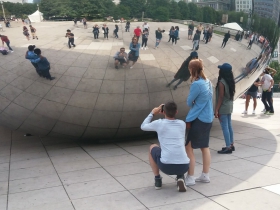 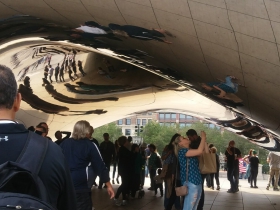 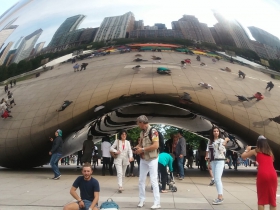 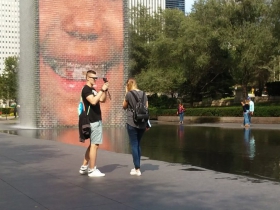 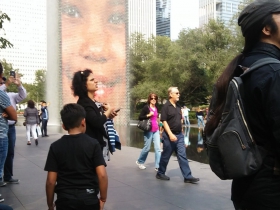 2 .Popular Public Places Breed Demand for More. Chicago parks have become so popular that developers now are willing to invest in creating more while ensuring they remain fully public. One such developer spoke from the audience at the IIT forum. Fees paid by developers have long played a role in funding parks in Chicago and Bob O’Neill, executive director of the Grant Park Conservancy, says there’s a strong culture of “parks philanthropy,” since both individuals and corporations recognize their value.

3. Influential Public-Space Champions Are a Key. Chicago’s former Mayor Richard M. Daley is unequivocally lauded for “changing the world for landscape architects” by making parks and other types of “urban greening” and beautification a top priority. Daley had an epiphany while visiting Paris and wanting his hometown to be as beautiful and welcoming. Landscape architects gained much stature and many commissions during Daley’s tenure from 1989 till 2011, which generated momentum that continues. Although current Mayor Rahm Emmanuel is less evangelistic than Daley, he advocates expanding the riverwalk and improving neighborhood parks.

4. Collaborations Can Be Fruitful. Chicago-based Terry Guen Design Associates worked with influential Dutch garden designer Piet Oudolf to implement his plan for Millennium’s innovative Lurie Garden, on which Washington, D.C.-based Gustafson Guthrie Nichol served as landscape architect. Guen spoke about how much she learned from that collaboration. Other high-profile landscape architects currently designing Chicago projects include James Corner Field Operations and Michael van Valkenburgh, both based on the East Coast and known for their ecological approaches to landscapes, like Guen. 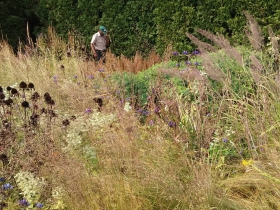 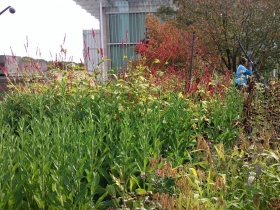 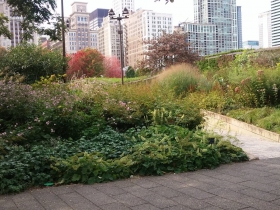 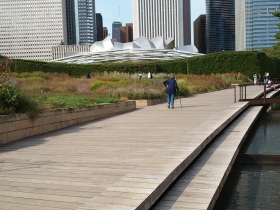 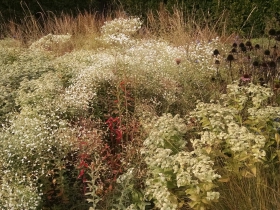 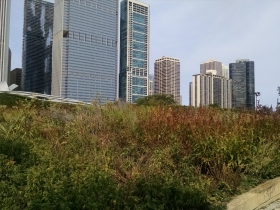 6. Great Public Landscapes Should Embrace Nature. Guen spoke about cultivating “biophilia,” and sees “no difference between gardening and landscape architecture (noting that the renowned Beatrix Farrand considered had called herself a “landscape gardener”). Guen believes that landscape architects must know how plants grow and how ecology works.

7. Landscape Architects Deserve Equal Footing With Building Architects. Panelists said that often happens now in Chicago. However, there’s still work to be done so that landscape planning does not happen as an afterthought, or merely under the direction of architects. Conor O’Shea, who recently moved from Chicago to join the faculty of the University of Illinois in Champagne-Urbana, spoke about the “Grass Ceiling” that often still exists for landscape architects.

8. Sensitivity To The Site Is Essential. In 1893, the World’s Columbian exhibition served as a showcase of ideas, including for landscapes designed by Frederick Law Olmsted, considered the father of American landscape architecture. Later, Burnham & Bennett’s 1909 Plan for Chicago “set a new bar for what landscape can do for you,” said Guen. Nonetheless, landscapes can too easily be undone through neglect or even wrecking balls. Some in Chicago have taken pains to honor existing landscape designs while updating them. Birnbaum noted that today’s landscape architects would not think of proceeding without an ecological survey and should take equal pains to know the historic and cultural significance of spaces and neighborhoods. He touted the value of accessing and contributing to the Historic American Landscape Survey. TCLF also has an ever-growing searchable database of important landscapes throughout the U.S.

9. Public Spaces Must Be Truly Public. Birnbaum noted that design of public landscapes has long been based on “democratic values,” on creating spaces that are inclusively, equitably public. Chicago officials and designers are taking note that appealing parks can also lead to gentrifying displacement of the very people they are meant to serve. Numerous strategies are being discussed–and some implemented–to promote equity. (For example, funding neglected neighborhood parks and including affordable housing as part of planning for areas getting upgrades to their parks.)

10. Getting The Word Out About Great Landscapes Is Crucial. Users of public spaces essentially vote with their feet—and often with their cell-phone cameras—when they like being in a public space. Birnbaum saw it as a positive sign that many professionals in the audience share images through Instagram and other social media. He also encouraged publishing in peer-reviewed journals. Panelists also stressed the importance of building relationships between working professionals and academia. Henderson urged that people simply share as widely as possible “whatever you’re passionate about.”