How to Build Wisconsin’s Economy

Bribing companies to relocate here doesn’t work. So what does?

In previous columns I argued that Wisconsin’s attempts to lure companies—particularly manufactures—through subsidies have been largely ineffective and threaten to become increasingly expensive, by promoting an arms race among states. But are there alternative strategies to build a stronger economy for Wisconsin?

Years ago, Michael Porter of Harvard Business School argued that successful business strategies took one of two forms: cost leadership versus leadership in differentiation. A company emphasizing cost leadership will do everything it can to drive down costs. Differentiation strategies take a variety of forms, but they all emphasize finding some unique characteristic, ideally something that others find hard to copy. It might be innovative products, responsiveness to customer needs, or a high service level.

What seems clear is that Wisconsin’s current leaders have chosen a cost leadership strategy, hoping to attract firms by offering low net costs. Underlying this strategy is the assumption that firms are also following cost strategies and will pick a site with the lowest net costs when all factors are considered. These include taxes and subsidies, labor costs, and environmental and other regulatory costs.

First, and perhaps most important, it would encourage “odd ideas.” In a 2006 essay, entitled How to be Silicon Valley, the venture capitalist Paul Graham discussed why the Silicon Valley ended up in the Bay Area:

The Bay Area was a magnet for the young and optimistic for decades before it was associated with technology. It was a place people went in search of something new. And so it became synonymous with California nuttiness. … a place that tolerates oddness in the search for the new is exactly what you want in a startup hub, because economically that’s what startups are. Most good startup ideas seem a little crazy; if they were obviously good ideas, someone would have done them already.

That’s the connection between technology and liberalism. Without exception the high-tech cities in the US are also the most liberal. But it’s not because liberals are smarter that this is so. It’s because liberal cities tolerate odd ideas, and smart people by definition have odd ideas.

Wisconsin has become more intolerant of “odd ideas” in recent years. The underlying notion seems to something like: “Since I don’t like X and you do, there is something wrong or immoral about you.” This is reflected in the legislature’s continued attempts to limit Milwaukee’s ability to run its own affairs. (To be fair, this instinct for telling other people how to run their lives is not unknown on the left.)

An example of this instinct is reflected in the instinctive rejection of public transportation. In recent years, proposals for light rail, a fast train to Madison and extending rail service north from Kenosha to Milwaukee have all been shot down by politicians playing to a crowd that believes everyone should be satisfied by a transportation system that consists solely of cars. And we still see the legislature sniping at the Milwaukee Streetcar.

A second element of a differentiation strategy is enhancing the quality of life. Are people moving to Wisconsin motivated in part, at least, because of the environment, or is it just for the job? During the height of the Great Recession as most of the US was shedding jobs, the Bakken region of North Dakota enjoyed a boom from jobs related to fracking. With lower energy prices, people left; there was nothing to hold them there.

Analysis from the Kauffman Foundation has found that startups were the main driver of job growth. With larger and more mature companies job growth at one firm was cancelled out by job shrinkage at another. (It is, of course, mathematically impossible for startups to have negative growth since they start the period under study with zero employees.) This discovery has led to an increasing emphasis on encouraging entrepreneurship.

Graham is skeptical of these efforts. “The way to get innovation is not to aim for innovation but to aim for something more specific, like better batteries or better 3D printing.” He points out most successful startups “grow organically out of a couple of founders building something that starts as an interesting side project.”

Likewise, a commentary from the Brookings Institution finds that economic development is moving away from the traditional models that hope to attract big investments from companies looking to relocate. “While landing a big brand name firm (invariably with sizeable public incentives) still grabs headlines, we are seeing more attention paid to business formation, talent creation, and the role of placemaking and infrastructure in both.” (Placemaking is defined as capitalizing on a local community’s assets, inspiration, and potential to create public spaces that promote people’s health, happiness, and well being.)

In a more recent talk in Pittsburgh, Graham singled out interesting restaurants, cheap housing, historical preservation, and a bicycle-friendly environment as reasons to be optimistic about Pittsburgh’s future.

Traditional economic development activities have come under increasing criticism in recent years. One problem is that they are a zero-sum game that doesn’t result in any net jobs. Economically they represent a redistribution of funds from predominantly middle class taxpayers to wealthy owners of companies. By contrast, improving the desirability of the Milwaukee environment benefits residents whether or not they result in increased economic activity.

A recent analysis of business incentives for economic development offered by state and local governments from the Upjohn Institute for Employment Research estimated that these incentive packages cost state and local governments $45 billion in 2015. It also found that the incentives “do not have a large correlation with a state’s current or past unemployment or income levels, or with future economic growth.”

This conclusion is consistent with Wisconsin’s jobs record as its manufacturing tax credit was phased in. As the following chart shows, it is hard to identify any bump from the credit. Wisconsin’s manufacturing growth, despite the huge tax credit, has basically been the same as what occurred nationally, while trailing the growth in most neighboring states. 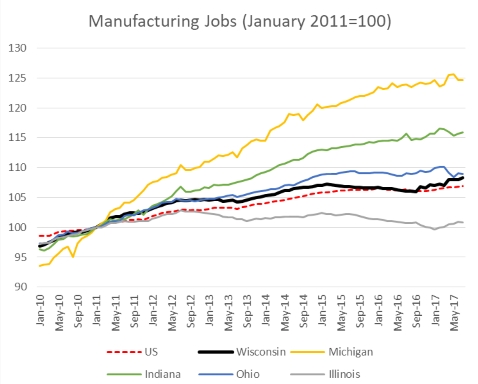 The evident failure of the tax credit to create jobs seems to have caused the state to double down, resulting in the very generous offer to Foxconn. Rather than signaling that “Wisconsin is open for business,” the size of the subsidy may signal that it takes a huge subsidy to make Wisconsin competitive.

It is past time for our state’s leaders, particularly those charged with development in Wisconsin, to take advantage of increasing research data on what works and what does not.

9 thoughts on “Data Wonk: How to Build Wisconsin’s Economy”