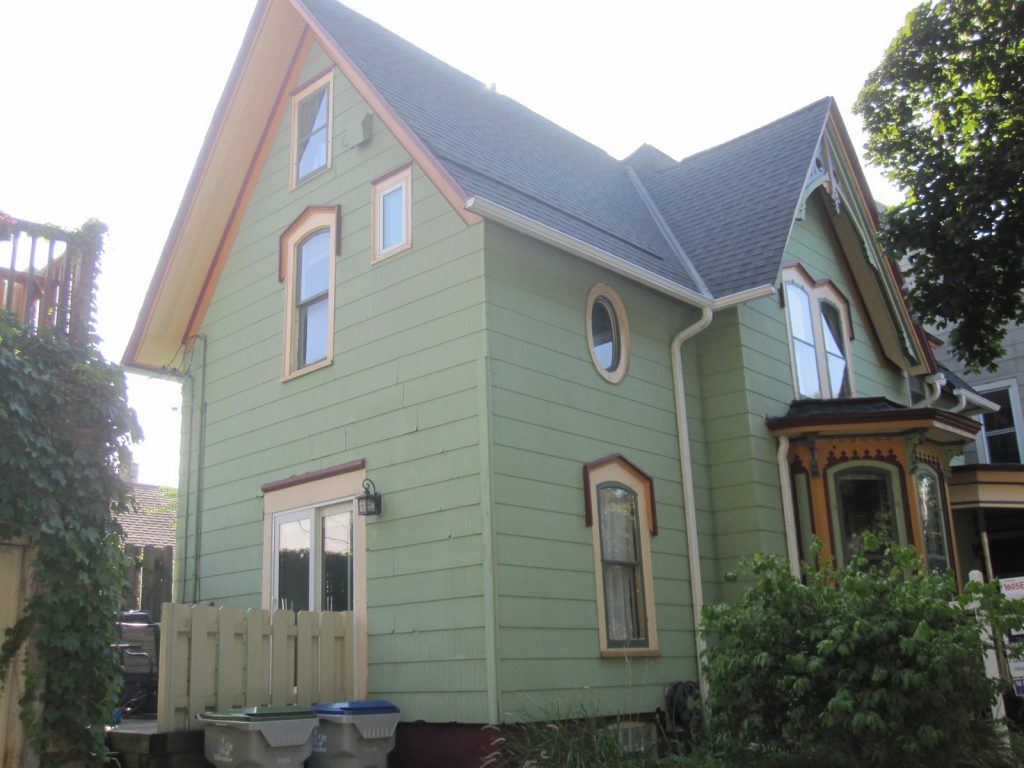 House Confidential today departs from the usual format to write about a home, an attractive Lower East Side cottage, which is now for sale. For readers as well as for any new owner, the house offers charm, history — and a bit of mystery.

The charm is evident and understated in the home’s modest, yet fine detailing, and articulated fenestration, a lovely central bay, a cute little oval window on the second floor, an inviting porch and plenty of scroll-cut detailing on its gable.

Its history is also evident, if understated. According to city records the residence was constructed in 1889, and therein lies the mystery, since the home is of the Carpenter Gothic Style (c.1840-1870) that had been out of fashion for a good quarter of a century by 1889.

And why on earth would an architect design a cottage and have it share a wall with a building immediately to the east? This is not a row house; it clearly was meant to be a stand-alone structure.

Yet an “Application for Permit to Build” dated September 21st, 1889 is found in the city’s records, filed under its current address showing that Mrs. Clara J. Gunn hired architect C[harles] O. Parsons to construct a $2,000 dwelling on Lot 32, Block 236 of Ward 18. And a search of the 1890 City Directory shows Ms. Gunn comfortably settled in her residence here on Lot 32, Block 236 at what was then 337-Kane Pl.

How to explain this? Easy. Blame a long-dead file clerk at City Hall. The building permit, it turns out, (after four trips to City Hall) is for the home immediately to the west of this residence. A search of that address shows no permit on file. Blame the dead clerk.

Was Once a Cottage on a Corner Lot

Originally Ms. Gunn’s home indeed was visible from all four sides, and from two streets, enjoying a comfortable setback from its corner lot. It had an address of 310 Oakland Ave., and Ms. Gunn had lived there since at least 1880.

But, in the pre-zoning era of 1889 it appears Ms. Gunn wanted to construct a home in that small space on her lot, and had it built right up to her home, cutting the old place off from any western exposure, and creating the landscape we see today.

Eventually, the 310 Oakland Ave. address was abandoned, the lot was legally subdivided and Ms. Gunn and her new neighbors were assigned Kane Place addresses.

The City of Milwaukee building permit system was in its infancy in 1889, when the corner property was to be constructed in “strict compliance with the provisions of Chapter 3 of the General Ordinances of the City of Milwaukee, passed February 13th, 1888,” as the permit application reads.

The permit ordinance helped city officials get a handle on the development of their burgeoning metropolis while also generating fees for the city treasury. In the period from 1880-1890, the population increased from 115,587 to 204,468. Land was at a premium, so it was not unusual to have several buildings constructed on a single lot, as is the case here. Just two blocks to the west, Polish flats were built as many as four deep in the immigrant neighborhood.

The city officials used the newfangled permits for a number of purposes, including to make sure that any new construction would not escape the attention of the assessor, to let the fire and police departments assess neighborhood needs, to plan for school construction and, incidentally, to make it easier for future historians to date the buildings of the city. So thanks for that.

For now, the age of this quaint cottage remains a mystery, but it could easily be dated to the Civil War or shortly thereafter. There is no way this thing was put up as late as 1889, so let’s not hear any more of that talk!

One day the assessor took a look at the property, which he described as the “East Side of Double House,” noting the odd fact that “Properties have separate [tax] key #s. … House needs painting.”

An unnamed assessor at an unknown date got closer to the truth of the building’s history in his remarks:

By September 24th, 1903, the home was owned by Mrs. E. Roberts. She hired C. O. Parsons to “set interior partitions. Room entry and Ice Box arrangements” in the amount of $200. This is the only evidence that Parsons was connected with this particular building.

The home, with its fine details, must have aged gracefully, since it required little work until December 1950, when the city was gripped in a new energy craze. Natural gas, piped in for the first time, provided a clean and economical heating fuel. This was one of the thousands of homes in the city to convert an old coal or oil burner to the new fuel. Gross Heating Co. did the job for $250. Nine years later the electricity got updated when A. C. Electric Co. charged $130 to install 16 outlets for Alice M. Coates.

A Change to the Porch

In 1965 this home was owned by Irene H. Ponto, who, as we can see, is one of a string of female owners of the property. Thanks to her $200 effort, the front porch assumed much of the shape it has today. She removed the steps that faced E. Kane Pl., and redirected them to the east, while extending the porch platform about three feet to allow the work to be done. She had her crew replace the foundation of the porch, and repair it.

(A remarkable feature of this porch is that its west end is the east wall of the home next door — the one built in 1889 by Charles O. Parsons as a rental property for Mrs. Clara Gunn. The curious thing is that this portion of the wall of the grey house is painted green, as is this cottage, helping to identify it as a space belonging to this residence. An elegant touch.)

In 1968 Mrs. Ponto got tired of exterior maintenance, and clad the side of the building “with 5/8″ asphalt shake and insulated siding,” which remains. That set her back $1,000. Fortunately, the contractors resisted the urge to tear the gingerbread off the trim. Such forbearance was not always the norm in those Space Age days. In 1976 Ponto listed the home for sale, asking $26,700.

The real estate agent was giddy with excitement about this listing:

The 16 outlets that Alice Coates installed in 1959 and the 11 new ones mentioned in the real estate advertisement were not enough to satisfy Mioskowski. She hired Dahlke Electric Co. to install 12 additional outlets in 1977, at a cost of $605.

Thus wired, Ms. Mioskowski stayed in the home until 1984, when she sold it to William and Carol Kissinger for $45,750. This appears to be the first time in a century that a man’s name was listed on the deed to this home. The Kissingers were also short-term owners, selling the home to Charles R. Ramage on the last day of 1985 for $52,000.

The house slips from the record until 1990 when JoEllen Mason, apparently a renter, wanted to use the living room and dining room of the home for her Synagraphic Design Co. business. “Not permitted. Board of Zoning Appeals variance required,” the city wrote her. The application was cancelled.

In 1991 Ramage appears to have been residing here and was tired of climbing upstairs whenever he had to answer the call of nature.

The city’s permit desk approved his application to “Remodel pantry into bathroom. No change in floor plan. Has existing window for ventilation.” The ventilated half-bath remains today as a welcome convenience.

Ten years ago Stephen Hewlett was the owner of the home, and he took some steps to modernize the interior. He spent $8,500 for a new bath tub, a lavatory, a shower and a water closet. He spent another $500 to wire the new whirlpool tub with electricity, in the meantime spending another $1,400 to upgrade the 200-amp service to a mighty 400-amps, all the better to whirl the water in the tub.

If there remains any further doubt that Charles O. Parsons was not the architect of this cottage, the reader is invited to take a look at the images of a number of known Parsons buildings in Milwaukee, none of which resemble in the least the architecture of the cottage, and all of which resemble to a great deal the home to the west. The homes include the one-time residence of poet Carl Sandburg when he served as secretary to Mayor Emil Seidel.

The home is currently listed for sale by Maureen Baumann of Coldwell Banker Realty. The home’s website shows a number of interior and exterior photographs of the property which may be of interest to readers. 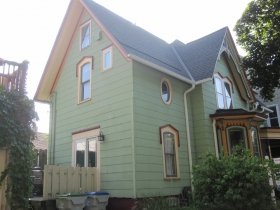 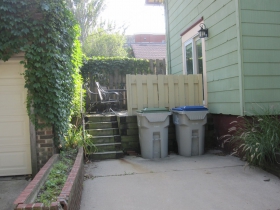 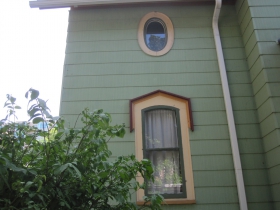 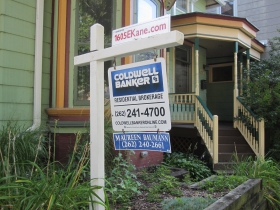 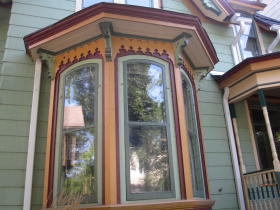 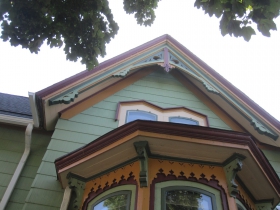 How Milwaukee Is It? The residence is 1.8 miles north of Milwaukee City Hall

6 thoughts on “House Confidential: A Cottage of Curiosities”