Any Whites Nabbed for Pot Possession?

By Gretchen Schuldt, Wisconsin Justice Initiative - Aug 28th, 2017 11:12 am
Get a daily rundown of the top stories on Urban Milwaukee

Research has shown that blacks and whites use drugs at roughly the same rates. And Milwaukee County is mostly (about 65 percent) white. So you might expect that most pot arrests would involve whites, but that is not the case.

The issue becomes all the more critical for second offense possession, which is still a felony in Wisconsin, even as some states have legalized marijuana.

With that in mind, the Wisconsin Justice Initiative has spent hours examining Circuit Court files to find who gets busted for second offense marijuana possession, where they get busted, and what happens to them.

Note, we are looking at only those cases where the defendant was charged ONLY with possession of marijuana, second offense (or greater). We are not including any case where there were other charges involved. 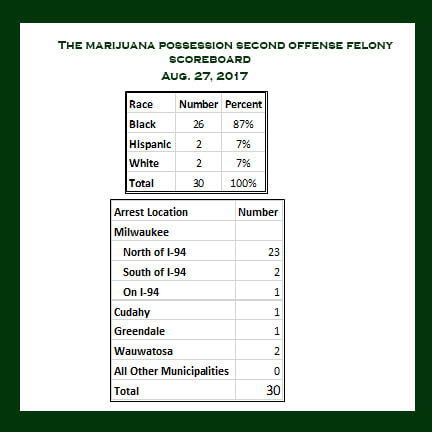 So far we have researched 30 cases and you can find a description of each case here on The Pot Page, where we do periodic updates.

Thus, 28 cases — about 94 percent — involved non-white defendants. Just two were Hispanic, while 26 involved African Americans. And all 26 of those cases involved men.

The pattern is pretty clear: So far, 26 of 30 cases, or 87 percent, were arrests made in the city. And of those 26 cases, 88 percent (or 23 cases) were arrests made north of I-94. Pot possession second offense appears to be a charge that overwhelmingly targets black men.

9 thoughts on “Court Watch: Any Whites Nabbed for Pot Possession?”