A Walk to Sustain Our Great Lakes 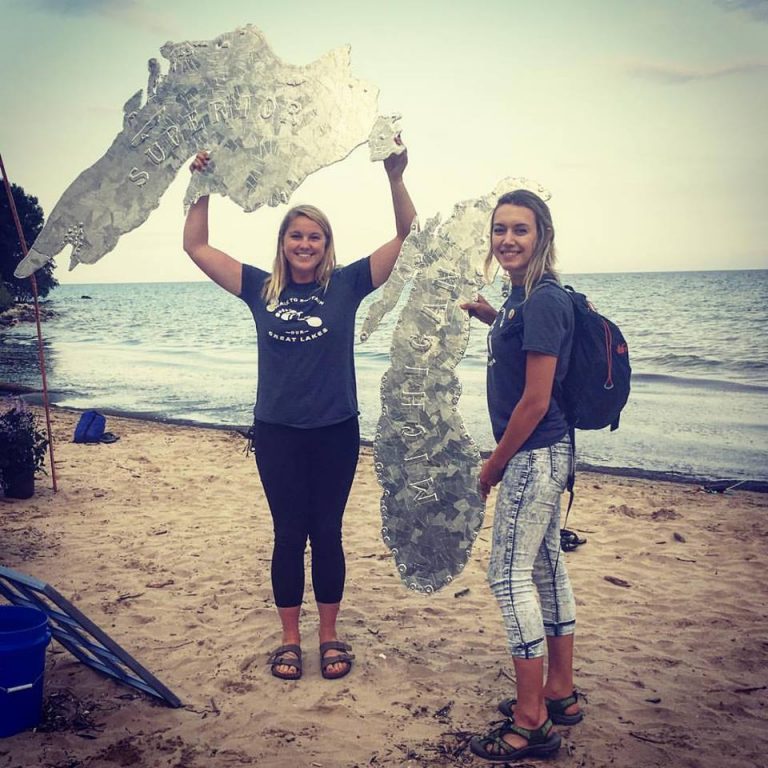 It takes about five and a half hours to drive from Milwaukee, Wisconsin, to Michigan’s Porcupine Mountains.

It will take Alyssa Armbruster and Julia Robson one month to walk the same route.

Starting on August 26, the pair will hike 332 miles from Milwaukee to the shores of Lake Superior at Union Bay. Their purpose is to highlight the Great Lakes as valuable natural resources and to raise awareness for freshwater conservation.

They’re calling it the Walk to Sustain Our Great Lakes.

Armbruster and Robson, both employees of the Milwaukee County Park Department’s Natural Areas Program, will meet with members of the communities they walk through to speak about conservation in the Great Lakes.

“It’s really rewarding to meet with people who live on the Great Lakes and discuss some issues that aren’t always as obvious to members of the public,” Robson said. “I’m looking forward to the learning opportunities we have and the ability to do outreach along the way.”

The pair will also do video blogging and social media outreach throughout their journey, which you can follow on Facebook.

Fundraising for the walk is being donated to several environmental nonprofits that engage in Great Lakes research and education. These include the Alliance for the Great Lakes, Discovery World and Milwaukee’s Urban Ecology Center.

Robson first presented the idea for the walk to Armbruster in January 2017. It took three months  to plan their route from Lake Michigan to Lake Superior — what Robson called the “most strenuous portion of the process.”

Their route takes them along paths like the Oak Leaf Trail and the Fox River State Trail. They’ll also be traveling some interurban trails and U.S. Forest Service roads.

Natural highlights along the way include Wisconsin’s Kohler-Andrae State Park, which boasts an impressive sand dune landscape, and the waterfalls in the Porcupine Mountains.

“Neither Alyssa nor I have ever been to the Porcupines,” Robson said. “We’ve spent some time in the U.P., but the Porcupine Mountains was the one spot in the U.P. that neither of us had been before. It’s going to be a pretty exciting finish for us.”

There will be a feature-length documentary of their travels produced by Rayni Day Productions.

The documentary will show the walk itself, interviews with community members and video of current conservation projects in the Great Lakes.

It will also include interviews conducted before the walk starts. The pair spoke with scientists from universities across Wisconsin. They even got to take a spin on the School of Freshwater Sciences’ research vessel, the Neeskay, to learn more about their buoy monitoring system.

They also talked with Great Lakes area farmers and commercial anglers for their take on local issues.

“Speaking to them was honestly one of the most eye-opening, interesting conversations I’ve had,” Robson said. “Especially with farmers, because in Green Bay or Lake Erie where they have a lot of harmful algal bloom problems, sometimes the public can easily villianize them. But speaking with these individuals, they genuinely do care. They’re not trying to be the bad guys. They’re just looking for solutions that work.”

Through the documentary, as well as community and social media outreach, Robson and Armbruster say they hope to connect people to the Great Lakes who might never think of them otherwise.

Most of all, they want the walk to spark conversation.

“There’s conversations that can be had amongst people from all backgrounds that are really important, and they need to happen,” Robson said. “I think that would be an accomplishment for me, to feel that I’ve well informed somebody of the positive things that have come out of what we’ve done in the Great Lakes region in terms of restoration.”

Eventually, Robson said she hopes the documentary will be shown in schools to educate children about the Great Lakes. She and Armbruster have plans to show it at the 2019 Environmental Film Festival in Washington, D.C.

They also said they hope to develop a lecture series based on what they learn during the walk. They want to deliver it in the communities they will visit, telling them more about Great Lakes conservation projects.

But on a more personal level, the walk will culminate in the satisfaction of having literally come so far.

“I don’t think I’ll ever do something quite like this again,” Robson said. “I just can’t wait to get to put my feet in Lake Superior, and just look down on it, and in simple terms, to just have walked that far, from one Great Lake to another. That’s going to be huge.”

You can find out more about the walk, and keep up with its progress, at its website and Facebook page.