Their support for Wisconsin gerrymander part of a disturbing international trend.

It is no secret that democracy is under stress in the early 21st century, both in America and globally. The US has a president who repeatedly expresses his admiration for foreign dictators and extremist groups.

The fragility of democracy is underlined by posts on the home website of Freedom House as I write this column. Internationally it reports on the “illegal grab of legislative powers by the constitutional assembly”—“part of Venezuelan President Maduro’s efforts to silence all dissent and shore up a dictatorship,” the imprisoning of democracy activists in Hong Kong, the assault on press freedom in Poland, and the new strategies of repression in democratic countries themselves.

How does democracy end? Classically, with a military coup. But in a disturbing number of cases, it commits suicide, as a democratically-elected group, once in power, changes the rules to entrench itself in power.

Despite this threat to democracy, groups that support partisan gerrymandering–at least when done for the benefit of the party they support—are easy to spot. Below is a list of the groups that submitted “friend of the court” briefs in support of the Wisconsin gerrymander, Act 43. These were sent to the US Supreme Court in anticipation of its October 3 argument.

Groups Who Support the Wisconsin Gerrymander

That the two dozen states and other organizations represented were willing to stand up for gerrymandering represents the triumph of partisanship over devotion to democracy. While several of the organizations represented describe themselves as “non-partisan,” it is doubtful they would have endorsed a Democratic-favoring gerrymander. (The briefs themselves can be downloaded from the Campaign Legal Center website.)

I find this a very depressing collection. Much of the right-wing seems to have adopted the attitude that gaining and holding power is more important than respect for democracy.

In ruling against Act 43, the federal district court adopted a three-part test to identify whether a redistricting plan is an unconstitutional partisan gerrymander. It concluded “that the First Amendment and the Equal Protection clause prohibit a redistricting scheme which (1) is intended to place a severe impediment on the effectiveness of the votes of individual citizens on the basis of their political affiliation, (2) has that effect, and (3) cannot be justified on other, legitimate legislative grounds.”

In his appeal to the US Supreme Court, Wisconsin Attorney General Brad Schimel complained that this test came as a surprise to him. “Are Defendants entitled, at a minimum, to present additional evidence showing that they would have prevailed under the district court’s test, which the court announced only after the record had closed?” he asked. If it truly came as a surprise, Schimel is confessing to incompetence at reading the direction the court was likely to take.

What additional evidence could Schimel offer? Once the court adopted its three-prong test, Act 43 was doomed. Wisconsin’s gerrymander fails all three parts of the court’s test. This was clear from testimony of the very people who had worked to develop the district maps.

In drafting Act 43, the Wisconsin legislature’s Republican leadership hired Keith Gaddie, a political scientist from the University of Oklahoma, to assess the maps drawn by staff members of the Republican caucus. Gaddie testified that he measured each map’s conformance to “the so-called good government principles of redistricting,” such as the appropriate racial and/or political make-up of legislative and congressional districts in Wisconsin, compactness, and the integrity of county and city boundaries.

He also built a regression model that allowed him to test the partisan makeup and performance of districts in the Assembly maps that the drafters passed on to him. The staff members then proceeded to choose the map with the greatest Republican advantage, according to Gaddie’s analysis. Given this history, it is hard to see what additional evidence would allow Act 43 to pass the circuit court’s test.

Among the amicus briefs to the US Supreme Court is one from two political scientists, Bernard Grofman of the University of California at Irvine and Keith Gaddie. Both have extensive experience with redistricting cases, in addition to Gaddie’s role as a consultant on Act 43.

Having studied redistricting from both sides, they are no fans of partisan gerrymandering. The quote with which I opened this column is from their brief.

Grofman and Gaddie argue that partisan gerrymandering has become steadily easier to quantify. This is partly because of advances in political science and partly due to vastly increased computer power allowing the quick generation of hundreds of possible district maps. This same advance increases the ability to create a map that favors one party over the other, without resorting to the odd-shaped district that were typical of gerrymanders of the past.

Grofman and Gaddie propose a three-part standard, similar but not identical to the standard used by the circuit court.  The first element is partisan asymmetry, “based on the idea that a citizen’s representational rights must not depend on the party with which he chooses to affiliate.” The next two graphs demonstrate how much Act 43 increased Wisconsin asymmetry to favor Republicans.

The first is based on the 2008 election whose districts were designed by a panel of federal judges. It is not perfectly symmetric; if each party won half the votes, Democrats would have won 48 seats, compared to 51 for the Republicans. 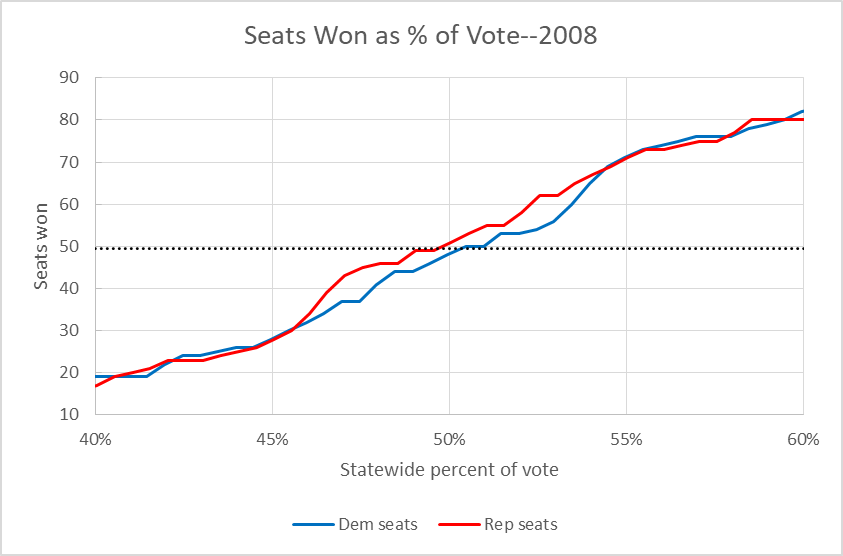 Compare this to the story told by the three statewide elections since Act 43. The gerrymander opened a huge gap between the ability of Republicans and Democrats to convert their votes into seats. With each party receiving half the votes, Republicans will win around 60 seats to Democrats’ 39. 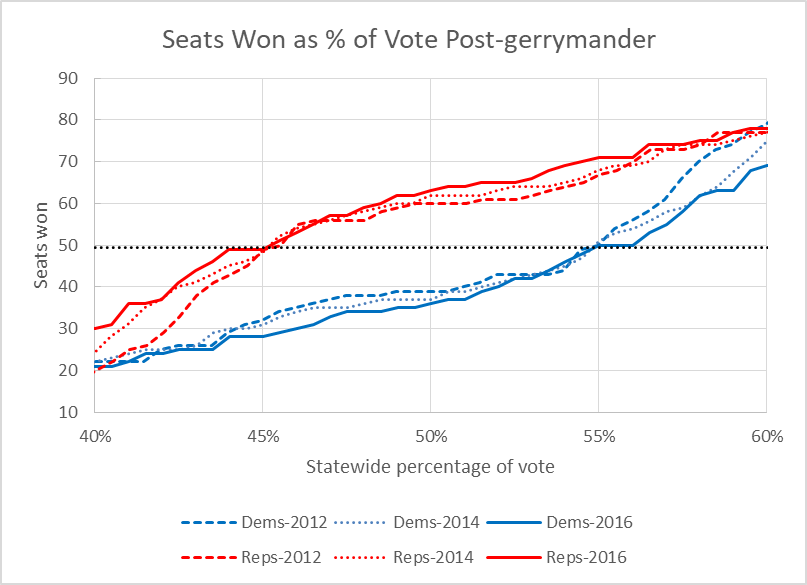 Seats Won as % of Vote Post-gerrymander

The second element in Grofman and Gaddie’s proposed test is lack of responsiveness. When voters change their allegiances, does their representation also change? The plot of the post-Act 43 elections shows the durability of the Republican advantage. It persisted whether the election favored Republicans (2014), favored Democrats (2012), or was almost tied (2016).

The third element in Grofman and Gaddie’s proposed test is causation. It requires that the partisan bias must be intentional, rather than the natural byproduct of ordinary districting practices or of chance. The history of Act 43, with a steady progression of maps with a greater and greater partisan bias towards Republican domination would seem to settle the question of causation.

I find the idea of symmetry an attractive one, because it comports with American democratic values. In contrast to some other countries, such as Russia, we expect courts to not favor people based on how the currently governing leader views them. This concept is inherent in the quote attributed to John Adams, that we are a “government of laws, and not of men.”

It is sometimes argued that turning redistricting over to legislators is an exercise in democracy. Instead as Wisconsin amply demonstrates, it creates an obvious conflict of interest. The steady improvement in measuring partisan bias means that situation will steadily worsen if the courts refuse to intervene. By the same token, this improvement in measurement offers the courts exactly the means they need to manage this threat to democracy.