Legislative language suggests this. What are the deal’s true aims and costs?

An outsider presented with the proposed Foxconn legislation and having no other information about it might conclude its primary aim is addressing economic distress in Wisconsin. The bill requires the Wisconsin Economic Development Corporation to designate “tier 1” and “tier 2” counties and municipalities. In doing so, it can consider (1) the unemployment rate, (2) the percentage of families with incomes below the poverty line, (3) the median family income, (4) the median per capita income, and (5) “0ther significant or irregular indicators of economic distress, such as a natural disaster or mass layoff.”

The same themes appear in language allowing the establishment of an electronics and information technology manufacturing (EITM) zone. In determining whether to designate an area as a zone, WEDC would have to consider “Indicators of the area’s economic need, which may include data regarding household income, average wages, the condition of property, housing values, population decline, job losses… the rate of business development, and the existing resources available to the area” and “the effect of… other initiatives and programs to promote economic and community development in the area, including job retention, job creation, job training, and creating high-paying jobs.”

The bill goes on to say that WEDC shall specify whether the designated zone “is located in a tier I county or municipality or a tier II county or municipality.” It adds that WEDC “shall, to the extent possible, give preference to the greatest economic need.” The bill’s language, if read alone, gives the impression that a prime motivation for choosing Racine or Kenosha counties is to attack pockets of poverty in those counties, and perhaps Milwaukee as well.

However, I am not aware of any mention of poverty reduction in the discussion. One would expect some analysis of the likely effect. At the very least, I would expect some analysis of the home ZIP codes of people at the time they were hired at the Amazon and Uline facilities which are located in the area where Foxconn would locate. That analysis could give a rough approximation of the effect on poverty of the Foxconn facility and would, I estimate, take less than a day.

I suspect that the real motivation behind the economic distress language is not concern about poverty. Instead, it’s meant to create a legal fig leaf to disguise the fact that, for all intents and purposes, the bill is a private bill aimed at subsidizing a single company, Foxconn, to convince it to build a plant in one of two counties. Yet nowhere does the bill utter the words “Foxconn,” “Racine,” or “Kenosha.” There is a reason for this; authors of Wisconsin’s constitution plainly dislike bills to benefit one person or entity. The Wisconsin legislature employs highly skilled bill drafters who know that by employing generic language they can guard against a constitutional challenge.

The same legislation offers another example of language that seems generic but is actually targeted at helping one private business. It would add a new section, 238.399 (5) (f), to the Wisconsin statutes that adds another a new category to the business eligible for enterprise zone credits:

Only those in the know would spot FISERV as the only beneficiary of this verbiage. Compared to the Foxconn part of the bill, the aid for FISERV, capped at $10 million is chicken feed. As the New York Times headlined its article on the Foxconn agreement, Wisconsin’s Lavish Lure for Foxconn: $3 Billion in Tax Subsidies.

Just how lavish is the lure?  According to the Legislative Fiscal Bureau’s analysis of the Foxconn bill, the company would gain two refundable tax credits. First, Wisconsin would reimburse Foxconn for 15 percent of its capital expenditures for the Wisconsin plant. This credit would be capped at $1.35 billion. The second would pay for 17 percent of Foxconn’s payroll and be capped at $1.5 billion. The next graph shows the LFB’s projection of the cost of these two credits. 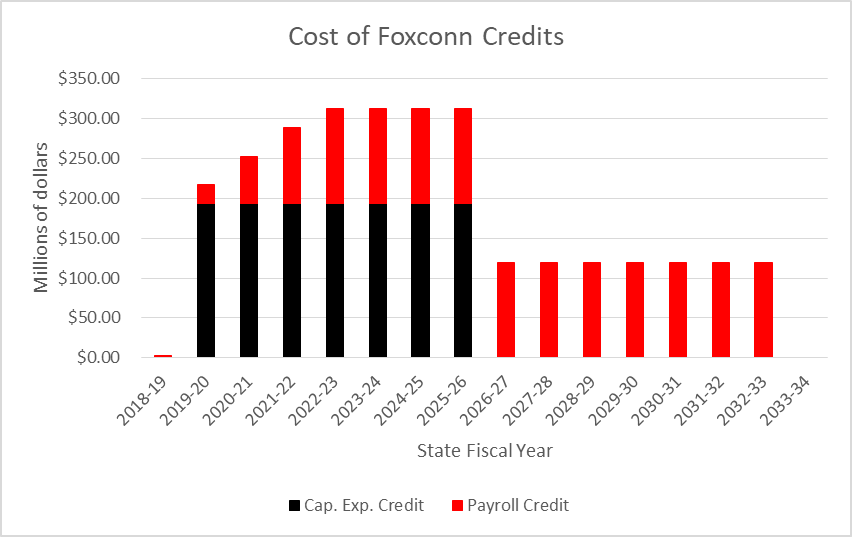 Because the Manufacturing and Agriculture Tax Credit would leave Foxconn with little or no tax liability even before the new credits kicked in, these credits would result in cash payments to Foxconn, rather than a reduction in its tax liability. At the peak, between 2022 and 2026, about 2 percent of Wisconsin’s state revenue would go to Foxconn.

The LFB, by necessity, makes a number of assumptions in its projection. One is that the average annual salary is $53,875, as estimated by Foxconn. Another is that all capital spending takes place in the first seven years, at which point the capital spending credit hits the cap. A third is that by the fourth year employment reaches the estimated maximum of 13,000.

It is unclear how many jobs will actually be created by the Foxconn deal. While a fact sheet from the WEDC flatly asserts “it will employ 13,000 workers,” the more cautious LFB inserts “up to” in front of that number. Although Foxconn would need to hire around 13,000 workers to get the full credit, there is no requirement that it do so.

It appears that the hiring of 3,000 workers is a firmer commitment from Foxconn. Foxconn’s president has been quoted as desiring to more fully automate his plants. It has been suggested that if Foxconn heavily automated its plant, the number of employees could be radically reduced. In this scenario, the payroll tax credits drop substantially but the capital expenditure credits continue, shown in the next chart. 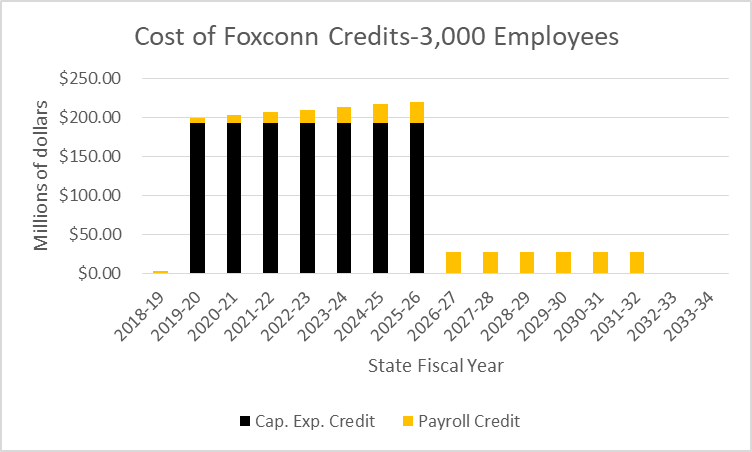 In this case the total cost of the credits would go down, but the cost per job would rise. The next graph shows the annual cost per employee of Foxconn payments under three scenarios: (1) assuming the LFB’s projections are met, and Foxconn hits 13,000 jobs in the fourth year, shown in red; (2) assuming that employment takes seven years to reach its peak of 13,000, in sync with capital spending, shown in green; and (3) assuming employment levels off at 3,000 rather than 13,000, shown in yellow. While the third strategy reduces the state payments to Foxconn (as shown above), the payment per job created increases substantially (as shown below). 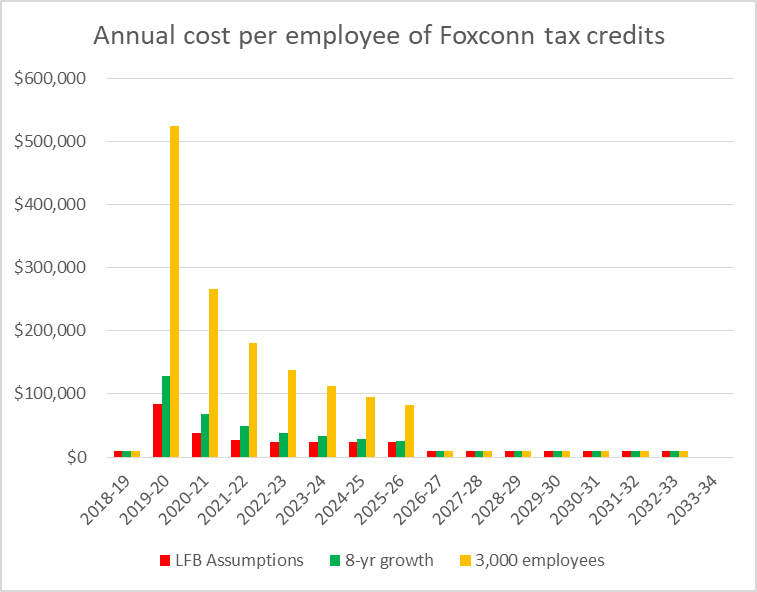 Over the entire 15-year period under the LFB’s assumptions, Wisconsin would pay Foxconn a total of $218,516 per job created. If, instead, the number of jobs topped out at 3,000, the cost per job would rise to $546,958. It should be remembered that the total cost is likely to be substantially higher when sales tax exemptions and things like training and infrastructure costs at both the state and local level are factored in.

WEDC’s fact sheet describes the Foxconn proposal as “transformational.” In its words, “Foxconn is bringing the future of manufacturing to the U.S., and Wisconsin will be the leader.” This term has been picked up by other supporters of the Foxconn tax credits.

Certainly the proposal is very large, but one has to worry that the enthusiasm it has generated reflects nostalgia for the Allis-Chalmers era of very large employers who hired lots of people. Does this nostalgia for past economic success get in the way of carefully analyzing the Foxconn deal, and doing this in the context of a sophisticated analysis of what it will take to move Wisconsin into the new economy?