Wisconsin-based cheese producer has been building homes in Milwaukee for 25 years. 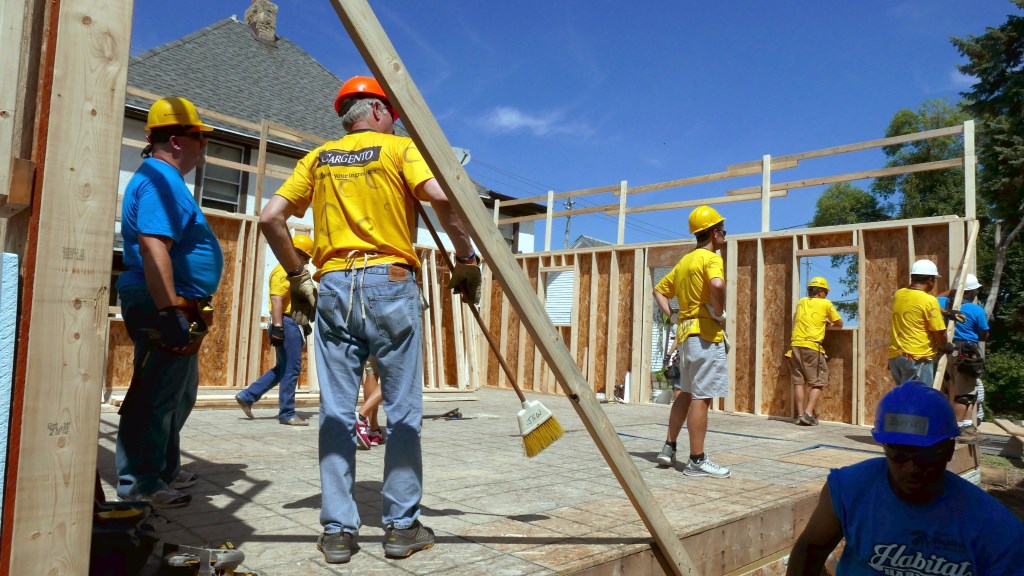 Sargento is helping to build this house, near the corner of N. 39th St. and W. North Ave. Photo by Graham Kilmer.

Sargento, headquartered in Plymouth, Wis., has been building homes in Milwaukee for 25 years, and is working with Habitat for Humanity on its 28th home. The latest home is in the Washington Park neighborhood.

The house, near the corner of N. 39th St. and W. North Ave., is going to Paul Walker, a father of three, whose latest child was born four days before the build started. Needless to say, Walker is excited to move his family into the new four bedroom house. But for now, he’s still working with volunteers to put the frame up.

Walker has an interest-free mortgage for the home. So even with the corporate partnership, this build will function like any other Habitat build. Except, Sargento has contributed to a lot of the construction costs, and is paying its employees to help build Walker’s home all week.

“Shelter being one of the basic needs for people,” said Sargento CEO, Louie Gentine. “We feel strongly as a company that, beyond food, that supporting organizations that help provide shelter for individuals and Habitat is especially near and dear to our heart.”

Gentine was joined Monday by the rest of the executive leadership team at Sargento. Men and women who would normally be in business attire and air conditioning were sweating through yellow Sargento shirts and carrying lumber. For this, Walker was grateful.

“I don’t know nobody out here,” Walker said. “It’s just nice for them to come out and help me.”

Out on the site were Sargento employees, retired and working professional contractors, and Habitat for Humanity volunteers, like Craig Hahn.

Hahn is the president of the Milwaukee Habitat for Humanity Board of Directors. He said on a build like this there are a lot of donations both in-kind and monetary. But the homeowner still has a mortgage and pays for the house.

“Contrary to what a lot of people think they don’t get the houses given to them,” Hahn said.

Along with the mortgage, Walker has to put in sweat equity in the form of construction hours as well as community hours. The latter involves volunteering for local events or fundraisers or attending community meetings in Washington Park.

“I think what Habitat’s doing is not just building houses,” he said. “We’re also working on revitalizing a neighborhood.”

Walker’s house is only a few blocks from his childhood home near the intersection of N. 38th and W. Galena streets. He credited organizations like Habitat for helping to rehabilitate his neighborhood.

“They’ve done a lot for the community and I just hope that they can continue to help the city out and keep building affordable homes for people like myself,” he said.

Growing up, Walker’s parents owned their home. And he said they were important to getting him on the path to owning his. “I think my parents showed me what to do, how to do it.”

Habitat homes typically take about 9 to 12 months to be ready for the family to move in, but with three kids, one of them a newborn, it really can’t come soon enough for Walker. Still, owning his own home will be gratifying no matter the timeline. Simply put, “It feels good.”

That feeling is a large part of why Sargento partners on these homes.