The House of Buried Cars 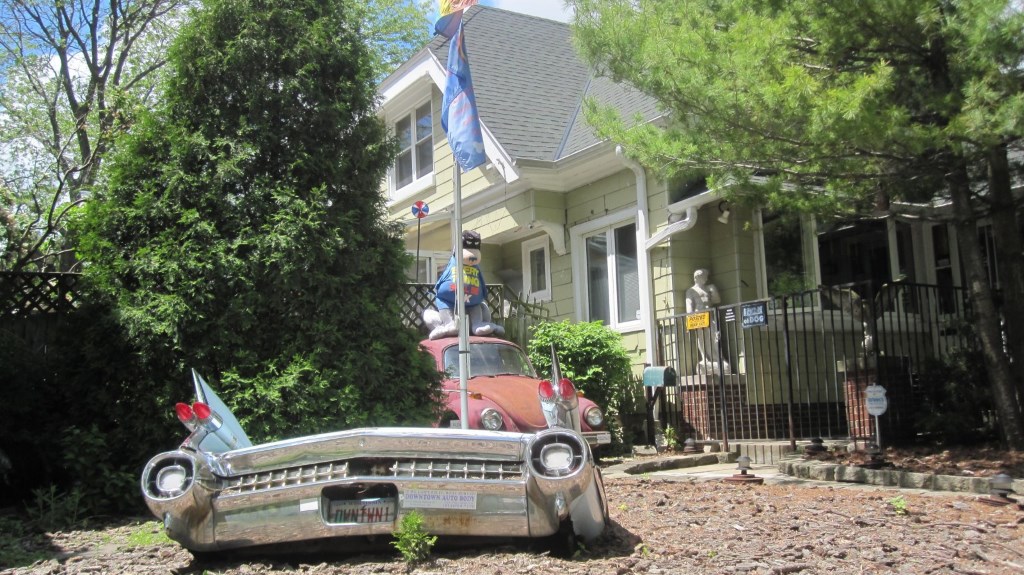 The House of Buried Cars. Photo by Michael Horne.

And some, it turns out, do get buried.

The company’s bumper stickers can be seen on a number of irreparable vehicles that have found their way from the shop to the N. Humboldt Blvd. home of Anthony Balistreri and David R. Jones, who have been a couple for nearly 30 years.

The first vehicle to dress up the yard was a 1959 Cadillac. It had a fine exterior, but little else of salvageable condition. Balistreri sawed it in half and planted it in his front yard, hooking up the lights as a novel effect. The machine was installed in 1998 as a tribute to Balistreri’s father, Anthony Peter Balistreri (1932-1995), who for many years operated Tony’s Place at 701 E. Center St. (See Urban Milwaukee Bar Exam: High Dive‘s Equitable Atmosphere)

The Cadillac was later joined by a Volkswagen Beetle and a  Model “A” Ford.

Both of those machines are functioning — after a fashion.

The VW, which is heading straight east toward the street, is caught in a fence.

The window of the Beetle serves as a place for the couple’s dogs to keep an eye on the front yard, which attracts a continual stream of visitors.

The old Ford also serves its purpose. Hidden within its fender is a logbook where participants in the sport of Geocaching record their victory in locating the spot with their GPS devices, another draw for the yard.

The home enters the city’s records in 1909 with what was called a “building addition” of $800 for Phenix Manufacturing Company. The addition was possibly to a $700 cottage — “no city water” that was built in 1896 for W. Cyminski. Neither of these structures show on 1894 or 1910 maps of the city, so we have a bit of a puzzle here, especially why the Phenix Company — manufacturers of sash and door products located nearby — was building additions to waterless cottages.

On July 6th, 1925, Robert Diekow spent $500 to build a garage here. This was an era of unprecedented garage building, and Riverwest was ideal for the phenomenon, since nearly every street in the neighborhood, including this one, had an alley in the rear. Diekow settled in for a long run at the home. In 1937 he added dormers so that the attic could be expanded, and apparently converted into a duplex. “The ceiling height must be 8′ 6″,” the inspector cautioned. In 1948 Diekow spent $1,380 on the place. “Old bld’g being repaired. Insulated stone siding,” the permit read.

By July, 1958 this was the residence of one Willy Mielke. He did Diekow one better in the exterior surfacing department by installing mineral fiber siding at the cost of $1,600. “Mineral Fiber,” popular in the mid-1950s, usually included asbestos.

With his house all dormered and multi-sided, Willy sold the place in 1973 to E. Stanisliewski, who held on to it until 1979 when it was purchased for an impressive $47,000 by Robert Liek.

It appears it took some time for Stanisliewski to sell his home. A “For Sale” advertisement for the home dated 1976 noted “natural woodwork throughout. Oversized lot. … Garage has electric and water … This home has that OLD World Charm. … Roof needs replacement.”

The assessor agreed, noting in an inspection that the “Ext. is well maintained. Property is in very good condition.”

A photograph of the property shows what appears to be a traditional bungalow on a typical, if somewhat large (55 foot x 120 foot) lot. The grounds were traditionally landscaped with a sloped lawn in front, which required tedious and possibly dangerous mowing.

If there remains room to bury anything else in this yard, a lawnmower would be a good suggestion, since the owners have turned their property into a comfortable, pleasant garden with many attractions beyond the vehicular, and many projects to be attended to other than mowing.

The projects include maintenance of multiple pieces of statuary, including a (replica) of Michelangelo‘s David, who is poised on the front porch to welcome visitors. A rainbow flag takes prominence in the front yard’s pole, and a stuffed animal informs us that “Everything Will Be OK,” brave words considering the times we live in. The backyard is fenced and is filled with wonderful and fantastical features, including no shortage of housing for cats and dogs.

The house itself has expanded under the current ownership. In 2006 the couple built a rear addition, and at some point a carport was attached to the south side of the old garage, along with a blue mannequin lying on the roof and a fierce concrete lion, perched high and ready to pounce.

The rear exterior is also equipped, a sign announces, with 24-hour security cameras, which the occupants, regrettably, are obliged to continuously monitor. On May 19th, Balistreri noted an attempt to steal his license plate, and the story made it to the lead on the evening news that night.

Jones and Balistreri have put much into their home and neighborhood, have rescued countless animals over the years, and have been open and welcoming to the community. It’s a shame that they have to put up with criminal activity in their own back yard.

About David Jones and Tony Balistreri

The couple were interviewed by the UW-Milwaukee “Shall Not Be Recognized” Gay Oral History project in 2007 when they discussed their then-18 year relationship, which has since been recognized, thanks to a Supreme Court ruling. 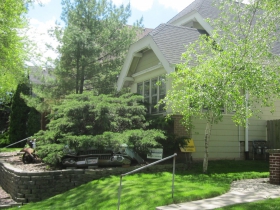 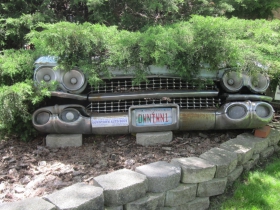 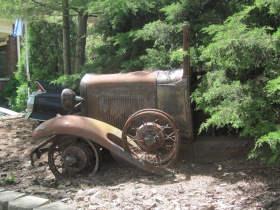 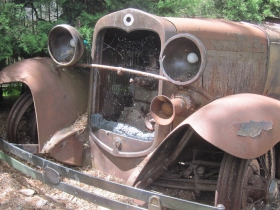 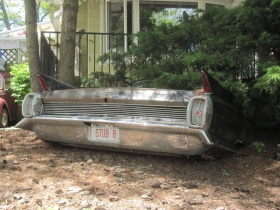 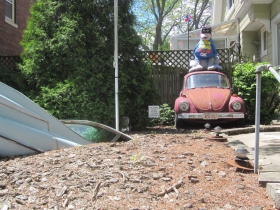 How Milwaukee Is It?  2.2 miles northeast of Milwaukee City Hall.

The Rundown was researched and compiled by Amanda Maniscalco

2 thoughts on “House Confidential: The House of Buried Cars”