Who is Leaving Wisconsin?

Wisconsin’s economic performance is dinged in a report put out by the American Legislation Exchange Council (ALEC) because more people leave the state each year than enter it. What can we learn about this migration and which states share residents with Wisconsin?

The migration data are a by-product of the US income tax system. Each year at the end of tax season the Internal Revenue Service reports on the number of taxpayers whose addresses have changed from the previous year. The most recent data compare addresses on 2015 and 2014 returns. Did the state change—or the county within the state?

Before jumping into interpreting this data it is worth pointing out two observations:

Which states are the primary Wisconsin migration partners?

As can be seen from the chart below Minnesota and Illinois are the two largest sources of new Wisconsin residents (shown in green) and also the primary destinations for former Wisconsinites (shown in yellow). The net migration is shown in red, pointing upward if the net flow is into Wisconsin and downward if it is out of Wisconsin.

In the case of Minnesota, more people leave Wisconsin than enter it. The opposite is true in the case of Illinois. 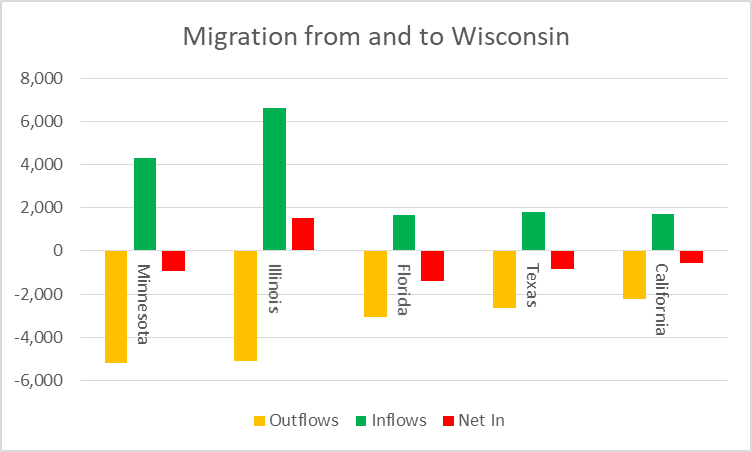 Migration from and to Wisconsin

The next three biggest flows are between Wisconsin and Florida, Texas, and California. While the net migration in each case is outward, the inflows are also the next three largest. As with trading partners, where Canada, Mexico, and China are the largest importers of Wisconsin products and the largest exporters to Wisconsin, larger inflows seem to be associated with larger outflows.

The IRS also counts moves between counties. (New addresses within the same county are counted among the non-migrants.) The next chart shows the in- and out-flows between Milwaukee County and its six largest migration partners. Except for Cook County (Chicago), all are in Wisconsin. Three are within the Milwaukee metropolitan areas. Waukesha County is by far the largest partner. 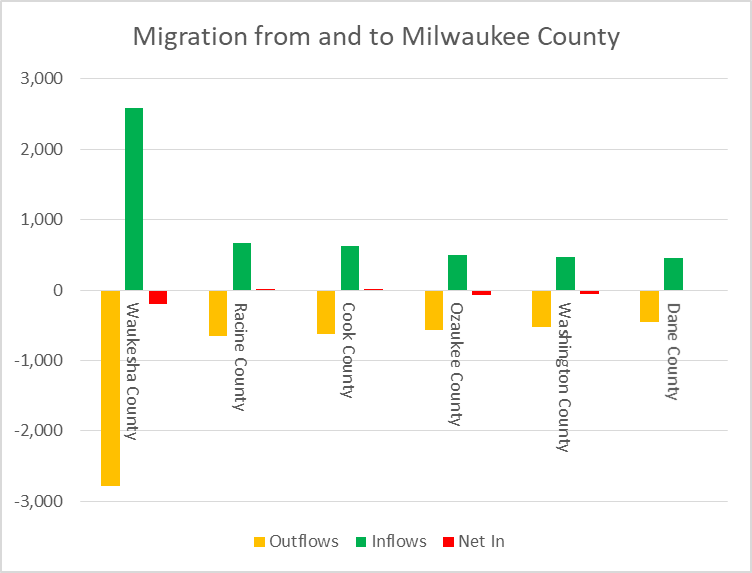 Migration from and to Milwaukee County

One reason to move is for higher pay. The next chart shows the pay for Wisconsin and its five largest migration partners. To check for consistency, I calculated it two ways. The first is the adjusted gross income (AGI) per year, shown with a yellow line and using the scale on the left. It was calculated by dividing the total AGI for a state by the number of returns for that state.

The second was the state’s average weekly wage, as estimated by the Bureau of Labor Statistics. I included them both because they show a remarkable consistency despite being calculated using very different methodologies and data sources. 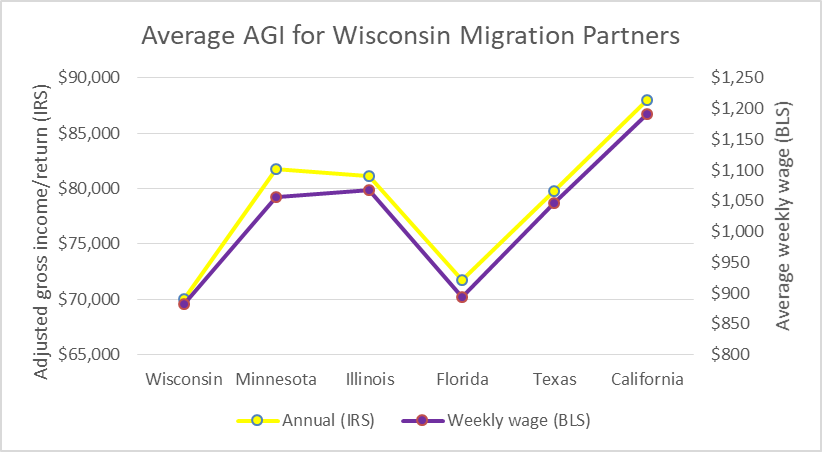 Here is a second way of showing the same information, showing the income clusters among Wisconsin and its migration partners. Now the story gets complicated. Minnesota and Illinois have about the same average pay, both substantially better than Wisconsin. Yet their net flows run in opposite directions.

One can speculate that government dysfunction in Illinois—the inability of the governor and legislature to agree on a budget and how to solve the state’s pension shortfall—helps explain the difference. However, this is a dangerous and well-trod path, leading to finding reasons to explain away data that does not fit a hypothesis. 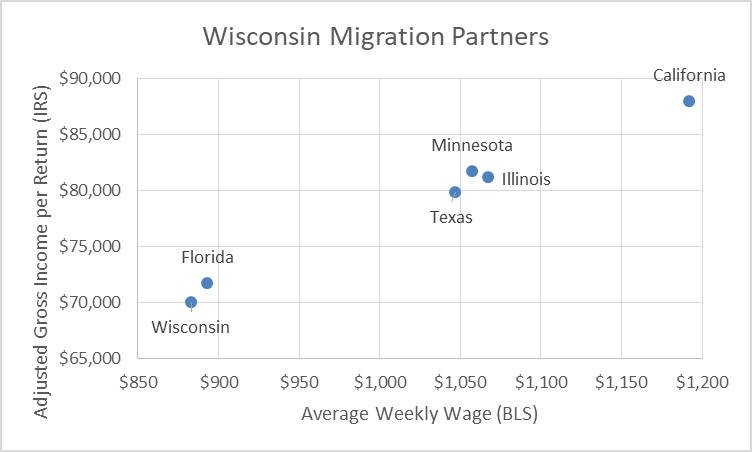 Another problem with going this route is that it assumes that a new resident in a state with higher average pay will personally benefit from that higher average. That may or may not be true in a particular case.

Do people move because they are suffering financially?

This asks a slightly different question. Do people leave a place because they are not doing well where they are? If this were true, one would expect the non-migrants to report higher average AGI than the migrants.

The next chart offers limited support for this hypothesis. It shows average AGI for those who had the same Wisconsin address both years (non-migrants), followed by those moving to or from other states and those moving within Wisconsin. This is followed by income for moves to or from Wisconsin’s 5 largest migration partners. 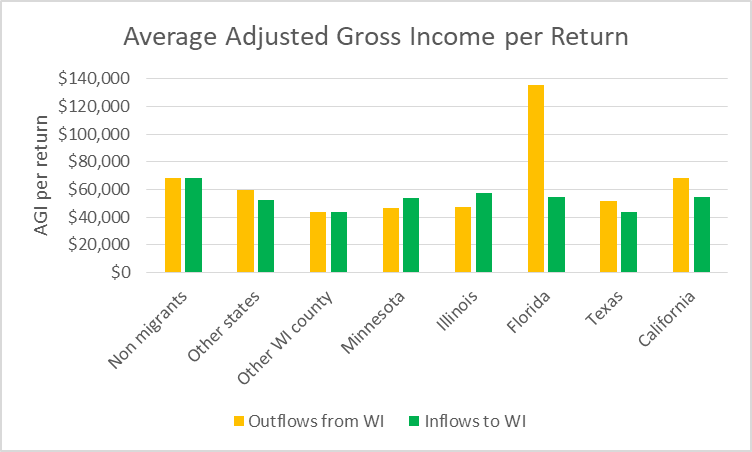 On average people who stayed put in Wisconsin did better than those who moved from or to other states and especially better than those moving within Wisconsin. One has to be careful with this conclusion, however, because it does not control for the stage of a person’s life among other possible factors. For example, perhaps the results for the migrants is heavily influenced by the inclusion of young people just starting their careers. The fact that the migrants have fewer exemptions on their returns suggests that this is a factor.

As with always there are exceptions to this rule. People moving to Florida and, to a lesser extent, California show higher income than the non-migrants. Perhaps this spike reflects retirees who sell their Wisconsin assets and get a boost in AGI.

The average AGI is for the second year—in this case 2015. This means we cannot check whether the move improved a person’s financial situation.

One oddity in the state data is that in-state migrants seem to be poorer not only than non-migrants but also those moving across the state line. Perhaps this reflects moves between rural counties where average income is lower than in the cities.

Why does moving within Wisconsin seem to hurt financially?

The next graph shows moves from and to Milwaukee County. As with moves to and from Wisconsin, people who move show lower average income than those who stay put. This is particularly true of people who move into the county. 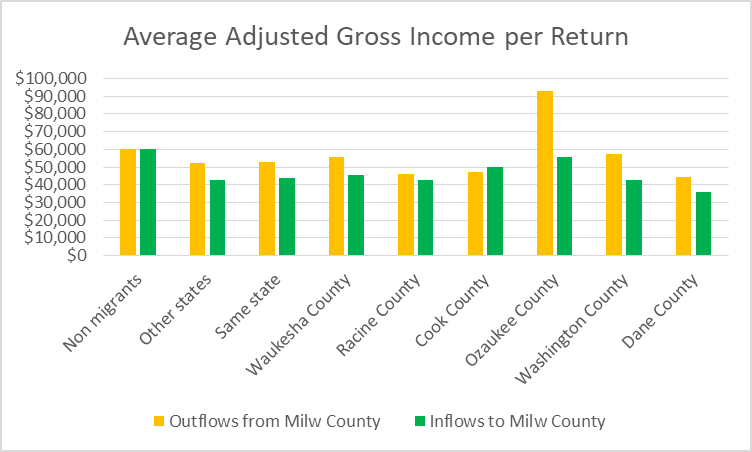 Again there are exceptions. Notably those moving to Ozaukee County seem especially prosperous.

Is moving an advantage?

The next chart shows the average AGI per return for Wisconsin based on the primary taxpayer’s age. This is based on another IRS data set, which does not show which state was also involved in the move. The solid lines are for 2014; dotted lines are for 2015. 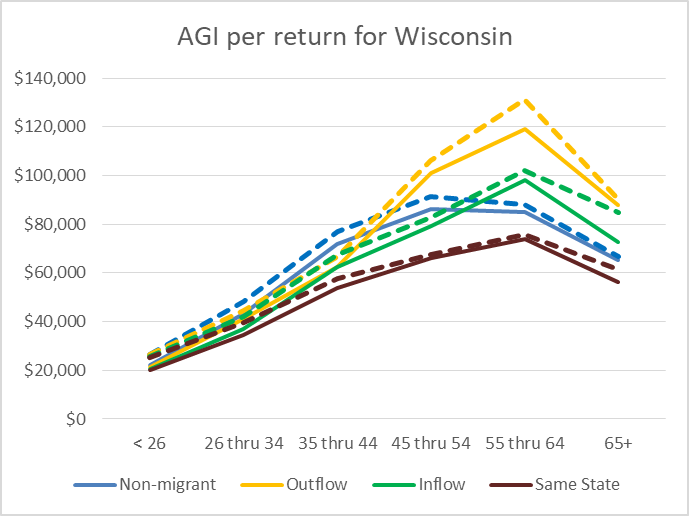 AGI per return for Wisconsin

Again, interpretation is tricky. A superficial conclusion is that for a middle aged Wisconsinite, moving out of Wisconsin is a good career move. More likely, executives moving up in their companies bias the data.

Is net migration a good measure of effective state policy?

Much more is needed to know about the reasons that people in various stages of their lives decide to move from one state to another before concluding that the reason people move is because of the presence or absence of a particular state policy.

After studying the IRS migration data from various angles, I find that the broad patterns are not easily explained. For individual states, constructing a plausible story is often possible in individual cases: for instance why there is net migration from Wisconsin to Minnesota or from Illinois to Wisconsin. But so far there are more mysteries than answers.

5 thoughts on “Data Wonk: Who is Leaving Wisconsin?”