The Vangard Group got a key city approval today for their three-building, 90-unit apartment proposal. The three phase project, known as City Place, would be built on a city-owned lot. The site, located at the southern edge of the city’s Halyard Park neighborhood, has been vacant since 2000.

Vangard Group, led by Kalan Haywood, would develop a mix of market-rate and affordable housing on the site bounded by W. Vine St., N. 5th St., W. Walnut St. and N. 6th St. The entire project has an estimated cost of $17.5 million.

Phase one would include a four-story building with 51 units, 43 of which would be affordable housing built with low-income housing tax credits. Twelve of the units would be townhomes with private entrances. City documents note it has an estimated cost of $8.8 million.

Phase two of the project, to be built at the northeast corner of N. 5th St. and W. Vine St., would include nine market-rate townhomes. They would be constructed as one two-story building, each unit with a private entrance. The estimated cost is $1.2 million.

The third and final phase of the project, would be a 3-story, 30-unit building built at the southeast corner of N. 6th St. and W. Vine St. The third phase carries an estimated cost of $7.5 million and would be entirely market-rate rental housing.

According to city documents, the entire project is expected to be completed by April 30th, 2021. The first phase is scheduled to get underway this year.

The project is being designed by Korb & Associates. Korb previously worked with Vangard on the Ingram Place Apartments and the conversion of the historic Germania Building from office space to apartments.

The 1.48 acre lot is really a collection of 19 lots that Vangard and co-developer Cardinal Capital Management will acquire from the Redevelopment Authority of the City of Milwaukee. The site was formerly all single-family homes that the city began demolishing in the 1970’s according to project architect Jason Korb.

The project drew praise from area alderwoman Milele A. Coggs. Coggs stated “I do want to commend Mr. Haywood for working with the neighborhood because this wasn’t the original design. There were concerns about tax credit projects in the area because they are plentiful in the district.”

Haywood stated that the neighbors wanted a project like Germania Building. He told the committee that when he inquired more about what they meant he found that they didn’t mind the high density, and in fact would have supported a taller building, but wanted a project closer to half low-income housing units. That’s in effect what Haywood is now proposing with 43 of the 90 units being set aside for those qualifying for rent assistance.

Because the developers are buying land from the city’s redevelopment authority they will be required to meet the city’s Residents Preference Program for 40 percent of the total worker hours on the project. RPP is a city-program aimed at creating jobs for unemployed or underemployed city residents. The developers will also need to hire city-certified Small Business Enterprises for 18 percent of the professional services costs and 25 percent of the construction and supply costs.

In exchange for the local hiring, Vangard and Cardinal Capital will be able to acquire the site in phases for $50,000.

The project was unanimously approved by the city’s Zoning, Neighborhoods & Development Committee. It will go before the full Milwaukee Common Council on June 20th. 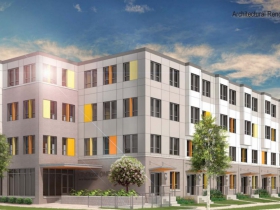 One thought on “Eyes on Milwaukee: New Apartments Approved for Halyard Park”