Judges give sentences twice as long with more jailing than other counties.

By Gretchen Schuldt, Wisconsin Justice Initiative - May 25th, 2017 12:55 pm
Get a daily rundown of the top stories on Urban Milwaukee

Milwaukee County judges handed down longer sentences – a median of 65 days – for nonviolent misdemeanors than did other judges around the state, new data show.

The statewide median sentence was 30 days.

None of the offenders considered had a previous conviction for violence.

Milwaukee County also ranked near the top in the share of nonviolent misdemeanants it sent to jail. Pepin County was tops, at 43.3%; Milwaukee County clocked in at 37%; and statewide, the median was 27.7%.

There also was a racial disparity the length of sentences for those nonviolent misdemeanors in Milwaukee County. The median sentence for nonwhite defendants was 70 days, 17 percent longer than the 60-day median for whites. 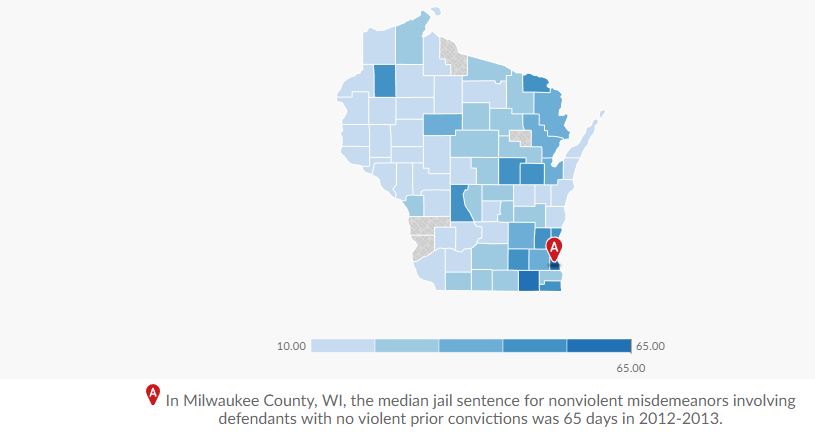 The median is the midpoint, meaning half the sentences were longer than the median and half were shorter.

Statewide, there was no racial disparity in sentencing, though individual counties did show disparities — in six counties, nonwhite defendants were sentenced to longer terms, and in 20 counties whites received longer median sentences than nonwhites.

The data, part of the new Measures for Justice portal that made its debut Tuesday, cover the years 2012-2013.

Milwaukee County Chief Judge Maxine White said the county is in the midst of implementing a $2 million grant Safety and Justice Challenge Grant from the John D. and Catherine T. MacArthur Foundation, to reduce the inmate population at the jail and the House of Correction.

Reducing the “misuse and overuse of jails is the mantra they gave us,” she said Wednesday.

The partners in the grant, including the courts, the district attorney’s office, the public defender’s office and others, are working to keep low-level offenders out of the criminal justice system, she said.

If methods other than criminal prosecution can be effective in dealing with those low-level crimes, she said, “we would have a substantially reduced caseload.”

The county, according to the Safety and Justice Challenge website, is focusing on three initiatives.

The portal’s data on nonviolent misdemeanors is only one of the data points that can be compared across county lines for the first time. The portal is still under development and contains data for just six states, including Wisconsin.

“The data are a treasure trove for communities that will now have access to reliable, informative, and comprehensive data about their criminal justice systems,” Amy Bach, president and executive director of Measures for Justice said in a prepared statement. “Our portal is intended to be a starting point for conversations about how to address the multiple issues facing the criminal justice system.”

There are data points a user will not find on the portal — at least not yet. There are no statistics about specific crimes, for example. But the data that are available will provide new context to criminal justice discussions in the state.

More Wisconsin tidbits from Measures for Justice for the 2009-13 time span — we’ll be looking deeper into these in the coming weeks and months: