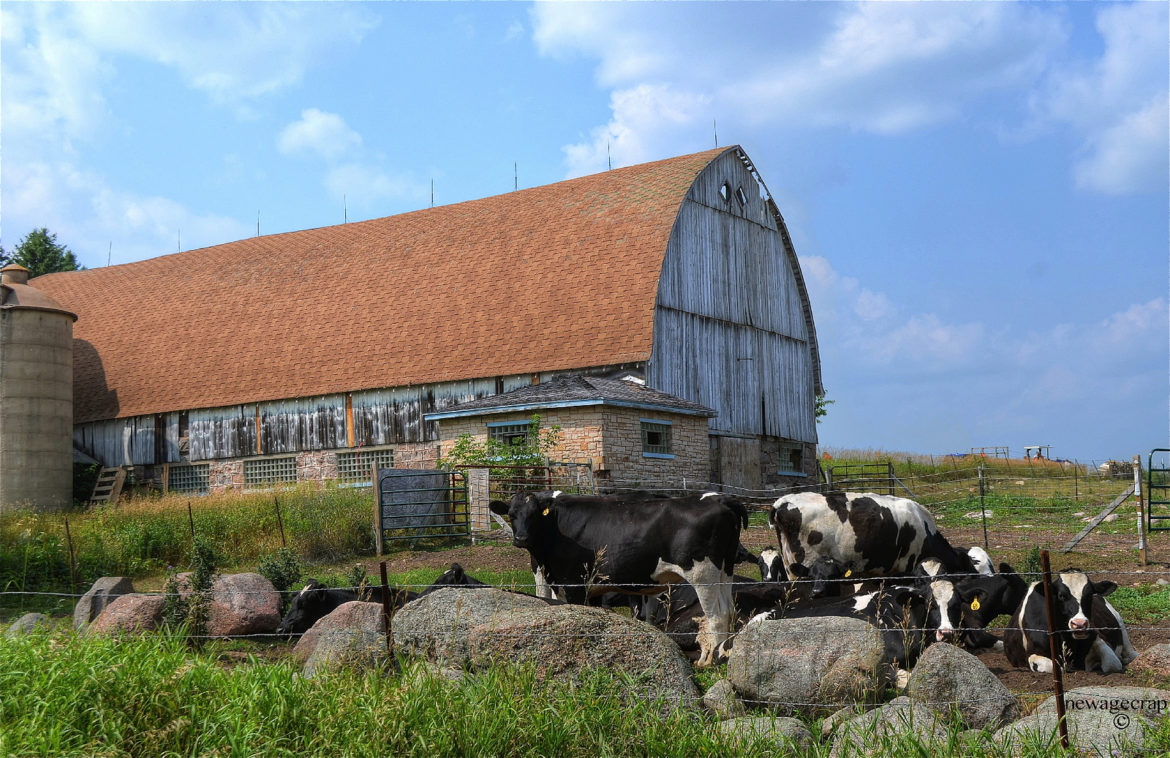 Some things to think about the next time you buy a gallon of milk or turn on your kitchen tap.

You have probably read about a trade-related change in milk supply purchasing procedures that places many smaller Wisconsin dairy farms in serious jeopardy:

Dairy farms in Wisconsin and other states could be forced out of business as early as May because of a trade dispute that has halted the export of their milk to Canada.

About 75 farms in Wisconsin have already been told that, in less than 30 days, Grassland Dairy Products of Greenwood will no longer buy their milk – leaving the farms without a place to ship their product in an already oversupplied market.

I was struck by that phrase “in an already oversupplied market.”

That oversupply threatens small farms in Wisconsin, as explained in this very personal, recent essay:

It is insanity to continue full throttle with production. We need to develop common-sense oversupply management measures that will responsibly balance the milk supply and take some of the gamble out of farming – milk supply management should not be achieved by processors abruptly dropping existing  farmers. I believe that when milk goes down the road, farmers shouldn’t be losing money. I also believe farmers shouldn’t have to fear the walk down their driveway to the mailbox.

You may also know by now that GOP servitude by Wisconsin Gov. Scott Walker to donors, trade associations and lobbyists is approaching a big payoff: the privilege through de-regulation to pump out large volumes of groundwater through permanent, big-volume permits at the expense of downstream and nearby users. That violates a constitutionally-guaranteed clean and fully accessible statewide water table where groundwater and surfaces are inextricably linked.

Or as the state DNR still describes it:

Wisconsin’s Waters Belong to Everyone

Wisconsin lakes and rivers are public resources, owned in common by all Wisconsin citizens under the state’s Public Trust Doctrine. Based on the state constitution, this doctrine has been further defined by case law and statute. It declares that all navigable waters are “common highways and forever free”, and held in trust by the Department of Natural Resources.

This constitutional right is being undermined, to the advantage of Big Agriculture as a result of Walker’s appointment of a developer to run the DNR, as indeed she has, with a “chamber of commerce mentality.”

So let’s make some connections:

It’s not surprising that the smaller farming operations are at the greater risk when the supply chain take a sudden hit due to changes in Canada, yet Wisconsin government in the Walker years of one-party, corporate-obeisant rule has been applying its official authority in a coordinated way to increase milk production to over-supply conditions while disregarding the consequences on small dairy farmers – – and the water supply, drinking water contamination and other issues.

Clearly there is a lot wrong with this picture;  the common thread is that those with the least power are being ignored and abused by those with more power.

*  Walker in 2012 began financing a state plan to boost milk production in the state:

Walker hopes to grow Badger State milk production to 30 billion pounds annually by 2020. The effort to do that has been dubbed “30×20” and is part of the Grow Wisconsin Dairy program.

Walker unveiled his proposal in Madison on March 13. He chose the twentieth annual business conference of the Professional Dairy Producers of Wisconsin (PDPW) for his announcement.

*  The GOP Attorney General, at the request of GOP legislators, issued an opinion last year that would make it easier for the DNR to award high-volume ground water permits sought by Big Ag and Big Dairy.

Wisconsin Attorney General Brad Schimel says the Department of Natural Resources can’t consider the collective impacts of high capacity wells in a given region when issuing new well withdrawal permits, according to an opinion released Tuesday.

That began with a request by GOP Assembly Speaker Robin Vos, who, in turn, was carrying water for major special interests who’d without shame hand-delivered their demands to the Legislature:

Since taking over state government in 2011, Republicans have made significant changes to natural resources laws, but they have failed to remove obstacles for frac sand mines, farms and food processors that want to dig more wells able to draw 100,000 gallons of water a day.

And big business hasn’t been shy about its demands, noted in October:

Here is the full text of the Vos request.

*  Meanwhile, the DNR has followed through with more and more permit approvals for the large, Concentrated Animal Feeding Operations, or CAFOs – – principally dairy farms and feedlots:

*  In fact, Grassland Dairy Products, the same big corporate buyer which is cutting off the smaller Wisconsin dairies, is applying for a DNR permit to open a 5,000-cow CAFO in Dunn County, so it looks like the bigger operators are going to continue their marketplace dominance – -with a boost from the state..

*  Information posted by the DNR shows a big increase in CAFO operations between 2010 and 2014.

*  Here is a newly-posted interactive map of all the CAFOs statewide, though it may be missing a few, some observers have told me.

Some of the CAFO dairy approvals give the OK for massive herd expansion – – and besides the milk supply issue also bring with them more demands for greater high-capacity groundwater pumping.

State regulators have granted a hotly-contested expansion permit to Kinnard Farms in Kewaunee County despite complaints from residents and environmentalists that manure is contaminating private drinking wells.

The Wisconsin Department of Natural Resources on Friday approved the large-scale dairy operation’s plans to grow from about 4,000 milking cows to about 6,200 milking cows.

*  There are now thousands of the high-capacity wells in Wisconsin which keep these expanding CAFO’s running – – just look at the number of recent applications which the Attorney General and DNR now agree cannot be reviewed with downstream or so-called cumulative impacts in mind.

The state Department of Natural Resources is inching closer to a long-anticipated decision involving the construction of a massive dairy farm that would house more than 5,000 cows in Wood County in central Wisconsin.

*  CAFOs contribute to the large dead zone in Green Bay, made worse by Walker and his Legislative allies’ unwinding of years of work to limit the runoff of algae-producing phosphorous.

Lobbyists for a farm group met with Gov. Scott Walker’s staff and talked about moving more authority over large farms from the Department of Natural Resources to the agriculture department several months before Walker directed the move be studied in his budget.

*  Major ag donors are getting controversial DNR groundwater pumping permits – – the kind which will become permanent if the Assembly passes that permission which has just gone through the Senate:

Two permits for controversial high-capacity wells that were issued by the Department of Natural Resources (DNR) and challenged last month by an environmental group belong to generous donors to Republican Gov. Scott Walker.

Clean Wisconsin filed nine lawsuits against the DNR that claimed the agency is violating its duty under the Wisconsin Constitution to manage and protect the state’s rivers, lakes, and streams by failing to consider the cumulative impact that high-capacity wells have on surface and groundwater when it approves high-capacity well permits.

So who and what’s getting screwed here?

People who want to fish an unpolluted or degraded stream, like the Little Plover River.

Clean air and water and our rights to it.

The expectation of fair and principled government without the constant presence of a big, rich, partisan thumb on the scales of justice, the legislative process, the assessment of permit approvals and the drafting of Attorney General opinions.

In other words, everyone but major corporate interests, high-capacity water users and the largest dairy operators – – also known as everyday Wisconsinites — are getting screwed.