Why Walker Should Expand Medicaid

Both the data and politics point in one direction: accept the federal funding.

In a recent exchange of letters with Congressman Ron Kind, Wisconsin Governor Scott Walker wrote that “we do not need to take the Medicaid expansion under Obamacare.” Is Walker right?

Rather than take the federal money to expand Medicaid, Walker adopted a unique plan that eliminated Medicaid coverage for those recipients who made more than the federal poverty level (mostly parents), thus making room for people making less than that (mostly adults without children). Those pushed out were expected to seek insurance through the federal insurance exchanges set up by Obamacare, as Walker also refused to set up a state health insurance exchange.

Many, including Kind, have suggested Walker did this for political reasons. As described in last week’s Data Wonk column, Walker’s maneuver was successful in reducing the number of people without insurance. Gallup’s state results are summarized in the chart below, showing the drop in the uninsured rate between 2013 (the left-hand end of each bar) and 2016 (the right-hand end). States expanding Medicaid are shown in blue; those refusing the federal funds in red. 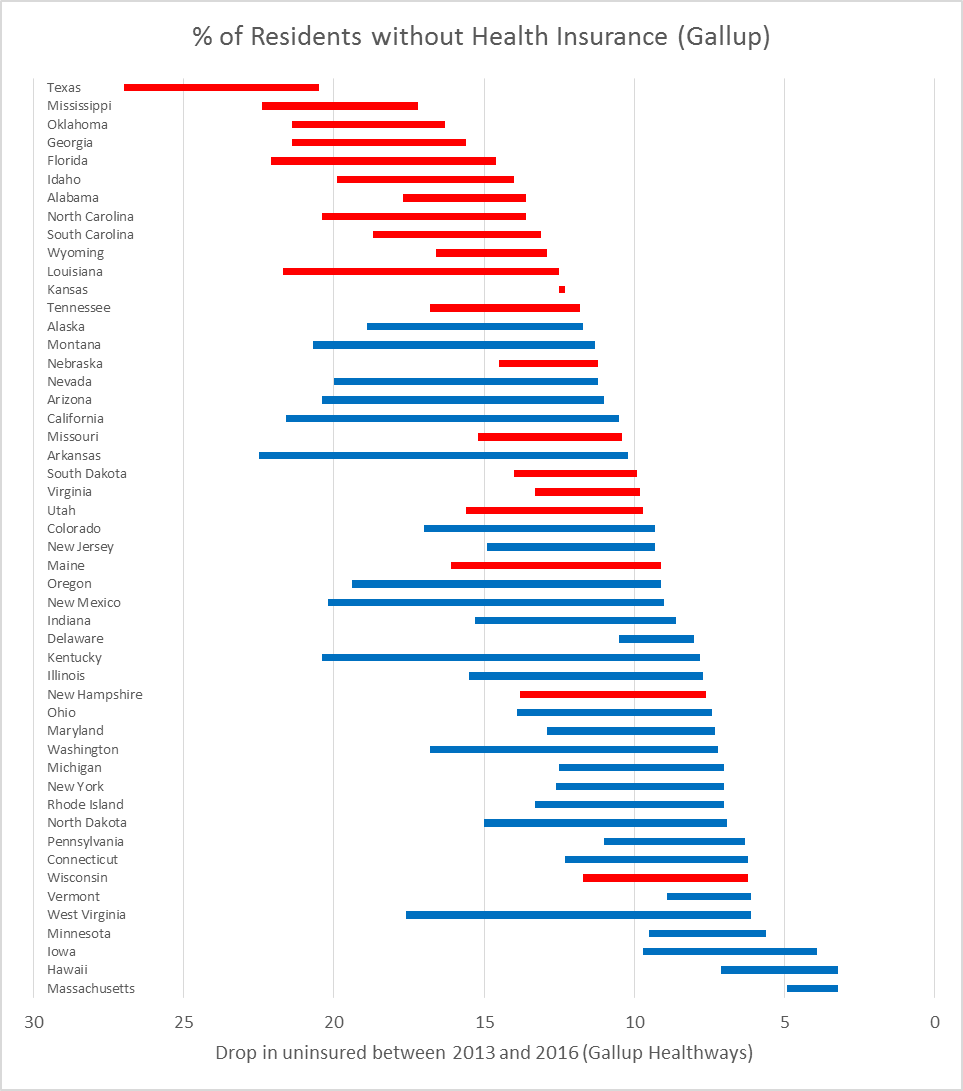 % of Residents without Health Insurance (Gallup)

Your oversimplified suggestion would use federal taxpayer dollars to shift people from coverage in the private marketplace to a government-run system. This would subject Wisconsinites to the whims of Washington D.C.

This comes with a certain irony. Who does he think runs the federal insurance exchanges his approach has relied on? As to the “whims of Washington,” the recent Trump–Ryan proposal to replace Obamacare would have made insurance purchased through the exchange unaffordable to many people just above the poverty line, particularly to those in their 50s or 60s.

Would Wisconsin be better off if it accepted the increased federal funds? Here are four considerations:

1. The cost to Wisconsin taxpayers

The non-partisan Legislative Fiscal Bureau has estimated that the cost to Wisconsin taxpayers of turning down the federal funds is around $200 million per year. The foregone funds could have helped reduce program cuts or even reduced Wisconsin taxes.

This is the main point that Kind made in his letter. He referred to a billion dollar cost, which is the total over six years, from 2013 to 2019. Kind also refers to a projected shortfall of over $1 billion in the current budget bill, which presumably covers two years. The casual reader might come away with the overly optimistic impression that accepting the expansion funds would solve Wisconsin’s budget problems. Accepting the funds would reduce the gap, but not fill it.

Some defenders of turning down the expansion funds argue that while doing so might be bad for Wisconsin taxpayers it is good for federal taxpayers who pay over 90 percent of the expansion. The chart below shows the Legislative Reference Bureau’s calculation of the state cost (in blue) and the federal cost (in orange) of the current law and of full implementation. 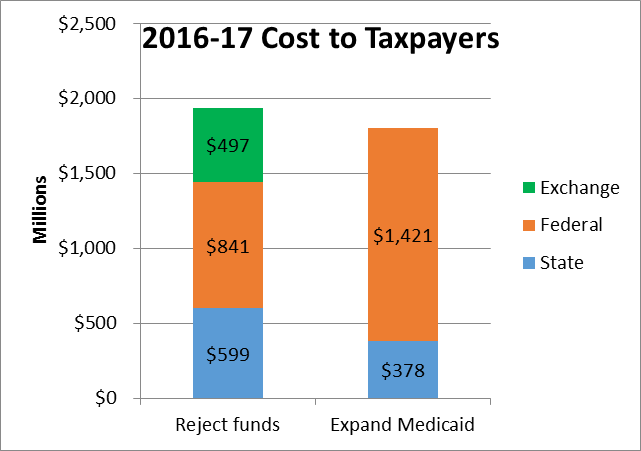 I find this argument odd philosophically. Essentially it demands that Wisconsin make decisions based on whether they agree or disagree with federal law, rather than what is good for Wisconsin given current federal law.

This argument also ignores the cost to federal taxpayers of the subsidy to make make health insurance purchased on the federal exchange affordable — which Walker’s approach relies on. The amount of this subsidy — provided through a tax credit — varies widely depending on the person’s income, age, and county. The graph below shows the range of annual subsidies In Wisconsin for someone making $20,000, which probably best describes the people who moved from Medicaid to the exchange. Averaging the means for the three age categories gave $497 million as an estimate of the additional subsidy for those forced to use the exchanges. 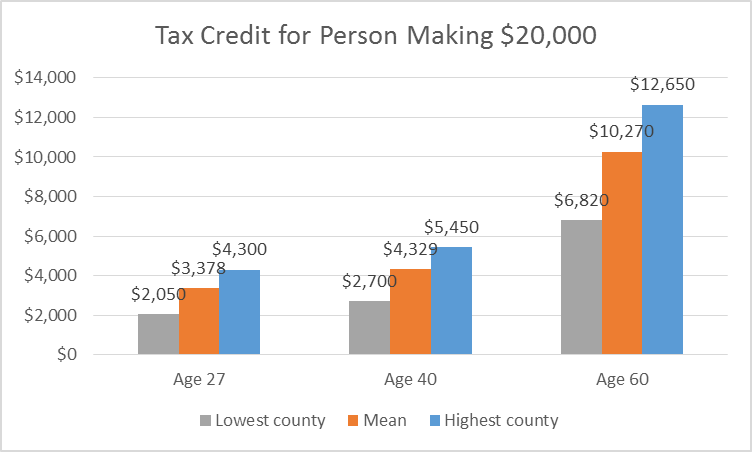 When all costs are considered it appears that the total tax burden would be reduced if Wisconsin accepted the expansion funds, as the earlier graph showed. One reason is that Medicaid is known for driving the hardest bargains with providers.

Which approach makes health coverage most accessible? There are anecdotal reports that while the tax credits make insurance affordable to low-income people, deductibles and co-pays may make them reluctant to use the insurance. The Kaiser Family Foundation organized six focus groups with working-class, Rust Belt whites who voted for Trump, as the New York Times reports. Three groups consisted of people getting their health insurance through the Obamacare Medicaid expansion; the other three through the Obamacare exchanges:

They were not, by and large, angry about their health care; they were simply afraid they will be unable to afford coverage for themselves and their families. They trusted Mr. Trump to do the right thing but were quick to say that they didn’t really know what he would do, and were worried about what would come next.

They spoke anxiously about rising premiums, deductibles, copays and drug costs. They were especially upset by surprise bills for services they believed were covered. They said their coverage was hopelessly complex. Those with marketplace insurance — for which they were eligible for subsidies — saw Medicaid as a much better deal than their insurance and were resentful that people with incomes lower than theirs could get it. They expressed animosity for drug and insurance companies, and sounded as much like Bernie Sanders supporters as Trump voters.

One argument made in favor of the Wisconsin plan is that low Medicaid payments to providers makes some doctors reluctant to accept Medicaid patients. Yet the Kaiser Family Foundation calculates that most doctors accept them (69 percent nationally and even higher in Wisconsin). The foundation also reports that “Medicaid beneficiaries access health care at rates comparable to the rates for privately insured people and at sharply higher rates than the uninsured.”

3. Political vulnerability of the exchanges

In his letter, Walker points to the risk that the federal government will renege on its promise to pay a higher share of the cost of expanded Medicaid. In doing so, he ignores the political risks to both the exchanges and to Medicaid, which his plan relies on. For instance the plan promoted by President Trump and Speaker Ryan would have made purchased insurance unaffordable to many of the low-income people in Wisconsin who lost their Medicaid coverage.

After the replacement bill pushed by Trump and Ryan collapsed, both men predicted that Obamacare would “explode.” This contradicts the opinion of most less partisan observers, including the Congressional Budget Office.

The trouble with this less sanguine conclusion, however, is that Obamacare is now under the Trump administration, which has a number of opportunities to encourage a meltdown of the exchanges. Several of Trump’s comments suggest he might be tempted to encourage such a failure and blame Obama and the Democrats. Whether or not Trump could create an “explosion,” he could certainly make the markets more shaky—or conversely shore them up by reducing uncertainty.

By contrast with the insurance exchanges, absent a change in the law, there is much less the Trump administration can do to sabotage a Medicaid expansion. As a single payer system, it is not susceptible to the feared death spiral.

Comparing Obamacare and the American Health Care Act, Walker and Trump’s proposed replacement, does not give one much confidence in Trump’s promises to people who voted. He promised a replacement in which people “can expect to have great health care. It will be in a much simplified form. Much less expensive and much better.” He promised:

We’re going to have insurance for everybody. There was a philosophy in some circles that if you can’t pay for it, you don’t get it. That’s not going to happen with us.

His proposed replacement fell far short of these promises to people who voted for him.

4. Modelling for other states

Finally the Wisconsin model is a political and economic dead end for other states. It only worked as well as it did because Wisconsin was already one of the states most successful in offering insurance to its residents, which resulted in Medicaid coverage for people who also qualified for the exchanges. It is unlikely that any states that did not take the expansion funds could afford to follow Wisconsin’s lead.

The increasing partisanship in American politics is distressing to many of us, who remember when members of both parties were motivated to solve problems rather than make debating points. At the end of his letter Walker demonstrates his part in polarizing the discussion:

Having stated these facts, I trust you will understand the humor I find in receiving budgetary advice from a member of Congress who is asking me to have Wisconsin taxpayers buy into Obamacare, which itself has increased the federal deficit by billions upon billions.

It is perhaps futile to point out that this assertion was rejected by PolitiFact, among others.

10 thoughts on “Data Wonk: Why Walker Should Expand Medicaid”